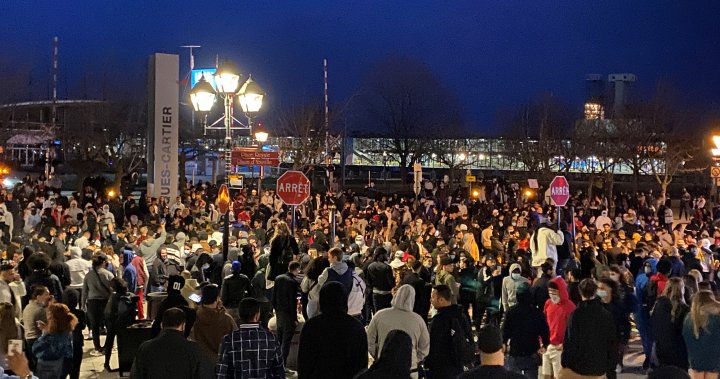 The tightening of the nightly curfew in Montreal after months of pandemic-related measures in the city has some residents feeling frustrated, but one doctor says restrictions remain necessary as a third wave fuelled by COVID-19 variants gains steam in Quebec.

Dr. Christopher Labos, a cardiologist and epidemiologist, explained he understands why people are upset with the public health order, but found the anti-curfew protest in the Old Port was “very disappointing” since it won’t “fix the problem in any way.”

“It’s very frustrating for me to watch scenes like this with people chanting ‘open the gyms’ and ‘freedom for the youth’ because let’s be frank, many of the older members of our population have not had freedom of movement for much of this pandemic either,” he told Global News Morning.

Protesters took to the streets Sunday evening, which was the first evening that curfew was rolled back to 8 p.m. in Montreal and Laval. The demonstration against the government’s health order devolved and resulted in seven arrests and hundreds of tickets.

Labos says it’s “very hard to prove” that curfew — which has only been implemented in Quebec — does make a difference in fighting the pandemic since it’s usually in conjunction with other measures, such as closing gyms and businesses.

But he stressed that curfew seeks to limit social gatherings and signals to the population that the health crisis is worse.

“We have to make some degree of sacrifices because the alternative is to look at what’s happening in Ontario, where the hospital system is becoming stretched and they starting to run out of hospital beds,” Labos said.

Variants of COVID-19 are more transmissible and hitting young Quebecers hard, he added.

“They are now getting more sick and landing in hospital,” he said.

The first and second waves primarily affected the elderly, but they at least now received a first dose of the vaccine. As the third wave gains traction, the virus is now spreading among younger demographics, according to Labos.

“Now the people who are the most vulnerable are the younger people so there are the ones who have to be more careful,” he said.

“Which is why it’s frustrating to see them out in force to see them protesting and saying ‘free the young.’ The reason to stay home is for them to protect themselves and not pass on the virus to their families.”