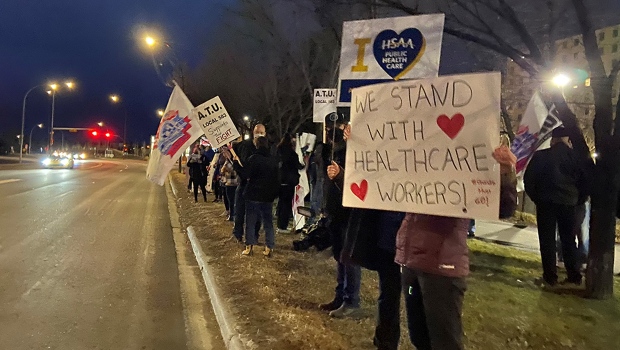 CALGARY — Several trade unions, hospital workers and everyday Albertans are rallying to protest privatization and what they call “dangerous cuts” to the provincial health-care system.

A number of rallies organized by the Alberta Federation of Labour are being held at locations across the province Thursday, including three events in Calgary.

About 100 people gathered Thursday morning in front of the Foothills Medical Centre. Many protesters held their union flags as a sign of solidarity as drivers honked their horns in support.

The protests are affiliated with five unions that launched a “Stand-Up to Jason Kenney” campaign last week calling on Albertans to take action.

Several groups are taking direct shots at Alberta’s UCP government after Health Minister Tyler Shandro announced last month that upward of 11,000 health care jobs would be cut with the contracting out of laundry and lab services.

Rory Gill, president of the Alberta division of the Canadian Union of Public Employees, says the Kenney government won’t listen to written letters, and that’s why his team took to the streets.

“Albertans works together, we come together, especially when we’re in a crisis and this government doesn’t seem to understand that,” said Gill.

The provincial government maintains that its recent decision to privatize services will save the province around $600 million annually. Shandro said that nurses and frontline clinical staff positions would not be lost during the pandemic, but some unions say their workers feel disrespected.

Bobby-Joe Borodey with the Alberta Union of Provincial Employees says health-care workers were deemed heroes at the start of the pandemic, but now they’re being undermined.

“They’re the frontline defence to keeping Albertans safe during this pandemic, but eight months later the message has changed and they’re overpaid and replaceable,” said Borodey.

“No one understands why this is happening in the middle of a pandemic and it’s shameful that the government is using this as an opportunity to take advantage of the members that work in health care.”

The United Nurses of Alberta (UNA) is also sounding the alarm that workers are desperately needed and cuts simply aren’t an option.

Cameron Westhead, UNA vice-president, says nurses are being pushed to the limit.

We’ve been short staffed even before the pandemic so things are even worse now,” said Westhead. “We’ve got hospitals filling up with COVID patients and staff are being forced to self-isolate because they’ve been exposed and so nurses are working overtime.

“Morale has never been lower and nurses are feeling like they’ve been disrespected by this government.”

The rallies come one week after hundreds of Alberta health-care workers walked off the job. The Alberta Labour Relations Board has since deemed that action illegal and forced workers back.

Two additional rallies are scheduled to take place in Calgary Thursday with one being held at the Sheldon Chumir Centre at 11 a.m. and another in front of city hall at 4:30 p.m.

Events are also being held in Lethbridge, Red Deer and Edmonton. 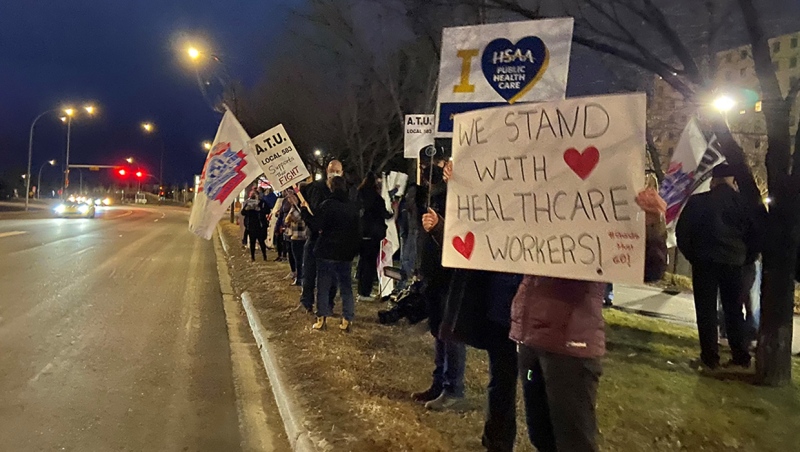