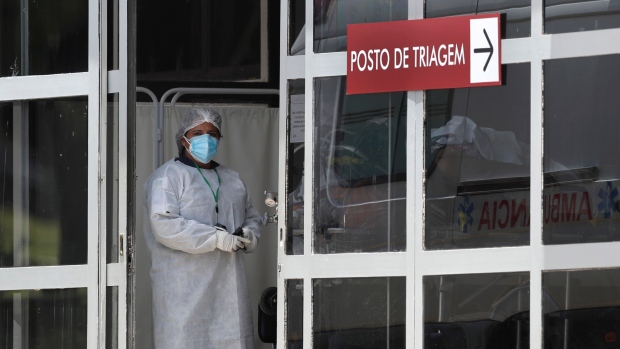 Hospital ICUs are reaching their limits across Brazil, as health experts and state officials beg the government to impose stricter lockdown measures to reduce coronavirus transmission.

The country’s ICU occupancy rates are the worst since the start of the pandemic, according to a Feb 26 report by the Oswaldo Cruz Foundation (Fiocruz), a Brazilian Ministry of Health research institution.

Eighteen of Brazil’s 26 states and one federal district have ICU’s at over 80% capacity, federal and state data show. Nine of those are at the edge of collapse at over 90% capacity.

Health Minister Eduardo Pazuello has acknowledged the crisis, telling state governors on Feb. 25 that new coronavirus variants had made controlling the pandemic even more difficult, in a country where death and infection rates have long raged out of control.

“The mutated virus has three times more contamination capacity, and the speed can surprise governors in terms of structure and support. This is the reality we have today in Brazil,” he said.

Data from Brazilian state health secretaries shows that the state of Rondônia is struggling most with rising case numbers, with ICUs at 97.5% capacity. It is followed by the southern state of Rio Grande do Sul at 97.2% capacity and the Federal District, which houses the country’s capital Brasilia, at 96.45% capacity.

Private hospitals are also collapsing throughout the country. Sao Paulo’s Hospital Israelita Albert Einstein, one of Brazil’s most exclusive hospitals — where the very first case of Covid-19 in the country was detected — is at 100% ICU capacity, the hospital’s spokesperson said on Monday.

Last week, Brazil marked a record with 8,224 deaths over the course of the week, bringing the country’s total death toll to 254,942. Brazil has also registered more than 10.5 million cases as of Monday.

The Fiocruz report urged Brazil to immediately adopt preventive measures to reduce the transmission of the virus while the vaccine is slowly rolled out. Just 3% of the country’s population have received one dose of a COVID-19 vaccine and only 1% have received two doses, the Health Ministry said Monday.

“With the slow vaccination process and the appearance of new variants of the virus and the uncertainties they still bring, grows the need to disrupt, or slow down, the virus transmission network through non-pharmacological preventive measures,” the report said.

The call was echoed by Brazil’s National Council of Health Secretaries. In an open letter, the Council demanded the government of President Jair Bolsonaro to impose a national curfew, ban mass gatherings and in-person teaching, close beaches and bars and implement a “National Communication Plan” to emphasize the necessity of such precautions.

So far, the Council said, Brazil’s “absence of a unified and coherent national approach made it difficult to adopt and implement qualified measures to reduce the social interactions that intensified during the electoral period, at the end of year, summer and carnival meetings and festivities.”

“The relaxation of protection measures and the circulation of new strains of the virus led to the worsening of the health and social crisis,” it added.

Throughout the pandemic, Brazilian President Jair Bolsonaro has criticized the use of masks, threatened governors who adopt lockdowns measures, and blamed past governments and governors for the lack of ICU beds.

“The health [system] in Brazil has always had its problems. The lack of ICUs was one of them and certainly one of the worst,” Bolsonaro tweeted on Jan. 28.