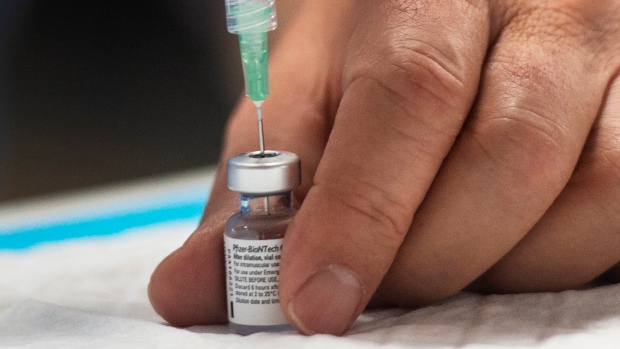 The results, revealed in a press conference Tuesday, seem to provide the first hint of how effective mixing vaccine doses could be.

In the study, shots of the Pfizer-BioNtech vaccine were delivered to around 440 people under the age of 60 who had already received AstraZeneca as their first shot.

The early results were similar to those from a U.K. study two weeks ago, finding that the combination was ultimately safe. The side effects observed were mostly sore arms, headaches, fever and fatigue, and generally cleared up after two to three days.

What the study was looking for, however, was how effective the combination was.

And they found that the mixed schedule of doses seemed to jolt the immune system into producing many more antibodies.

It’s important to note that the data itself has to be reviewed and published, but it’s a good sign, according to some scientists.

“We only have the media reports, not the actual data,” Tania Watts, professor of immunology at the University of Toronto, told CTV News. “But the report is that for several hundred people who had the AstraZeneca vaccine as a first dose, and then were given the Pfizer vaccine as a second dose, first of all, they got the typical vaccine symptoms of chills, fever, headache, nothing alarming, so it was safe.”

“And secondly, they got a really remarkable boost in immune response, about 150 times more antibodies, which means a very good boost.”

She pointed out that the Spanish study didn’t include a group of people who received AstraZeneca twice — the study’s control group simply didn’t receive any second shot — so it’s lacking that comparative data.

“But what we do know is it’s reassuring that people can have a different vaccine after AstraZeneca, that it’s both safe and looks like it’s quite effective to have that second boost, the second vaccine being an mRNA vaccine,” she said.

She explained that, immunologically speaking, it should make sense to mix mRNA and adenovirus based vaccines because AstraZeneca uses an inactive form of an adenovirus in its vaccine, and the mRNA vaccines work in a very different way.

“So actually from basic immune principles, it’s actually a good idea to switch, because the immune system doesn’t recognize those RNA lipid nanoparticles, so it’ll get delivered very well,” she said. “So it doesn’t surprise me that they got a very good second response.”

To be eligible for the study, participants had to have received their first shot at least eight weeks prior. The preliminary data looks at the antibody level two weeks after receiving the second shot, and scientists say they need more long-term data.

The study follow-up will be at least 12 months long, according to researchers.

Dr. Joan Albert Arnaiz, a clinical pharmacologist and one of the researchers behind the Spanish study, said that the results on the preliminary immunogenicity were in line with what they’d expected.

Spanish authorities, Arnaiz explained, wanted to run clinical trials to see if mix and matching vaccine doses was safe, before making a policy decision on whether to provide AstraZeneca for second doses.

But he doesn’t believe the study results should disqualify AstraZeneca from being used for second doses.

“In the current situation, I would not be reluctant to use any of the vaccines,” he told CTV News, adding that their study is too small and fast to have eliminated every uncertainty.

Arnaiz said he does not believe the results definitively say that mix and matching is a better option than administering vaccines as they were designed.

“I think that both options are good enough, but all marketed vaccines are quite good, and they probably can be mixed,” he said.

“Mixing vaccines can be even useful depending on the situation, but also on the variants that we can have in the moment. In some cases even, they can improve the response, so it’s not unlikely that this can be a good, good strategy, in the near future.”

Mix and matching vaccines has been an important question, especially for those who received AstraZeneca for their first shot, and then had to watch as concerns and policies around that vaccine changed.

About 2.1 million Canadians were vaccinated with AstraZeneca, but many provinces have paused it’s use for first doses amid 21 confirmed cases of a vaccine-induced blood-clotting disorder that has claimed three lives.

Canada still has around 250,000 doses of AstraZeneca. Some will expire in a month, lending urgency to the decision for how to use the remaining doses and ensure they don’t go to waste.

“There’s no hard rule that says that the pharmacists and physicians can’t offer doses, according to the manufacturer’s guidelines within Health Canada’s approval,” Dr. Joss Remier, medical lead of the vaccine implementation task force, said.

Officials in Canada have not announced a decision on whether to allow mix and matching vaccine doses, but say we should know soon.