The federal government laid out details for Canada’s coronavirus vaccine rollout Thursday, saying it plans to have logistics and infrastructure in place before Christmas, according to Dany Fortin, the lead on the nations’ COVID-19 distribution of a vaccine.

Speaking at a media conference, Fortin said although Health Canada is still reviewing approval for vaccines, the federal government and provinces are working on a rollout plan and will do a trial run next week.

“We’re not going to wait until the end of December … we are getting ready so that when it becomes possible we are poised to distribute,” he said.

Fortin said the vaccines that require colder storage, such as Pfizer and Moderna, are most likely to be first distributed in January.

But the initial shipments of vaccines to arrive in Canada, called “track one,” will be rolled out differently.

For example, Moderna’s vaccine will first be shipped to one location in Canada and then sent to communities across the country. But the Pfizer vaccine will be sent directly to the communities, according to the federal government.

This is because Pfizer’s vaccine requires specially designed temperature-controlled shipment and storage containers — the temperature has to be -70 C for up to 10 days unopened.

Fortin said the military, federal government and provinces are implementing a “soft launch” of the distribution plan in order to ensure authorities are ready to handle the ultra-low temperatures required for Pfizer and Moderna.

Fourteen sites across Canada will be ready for Pfizer, he said.

Moderna expects the vaccine to be stable at normal fridge temperatures of two to eight degrees Celsius for 30 days and it can be stored for up to six months at -20 C.

Fortin said every province has already identified the “points of use” where the vaccines will be distributed. And by Dec. 14, he added that these locations are expected to be ready for the vaccines.

“So this gives you a sense that in December, we’re hard at it in the next couple of weeks to ensure you that we are ready,” he said. “I kind of like the idea of being ready before the Christmas timeframe so that we’re certain to be ready when it comes in January.” 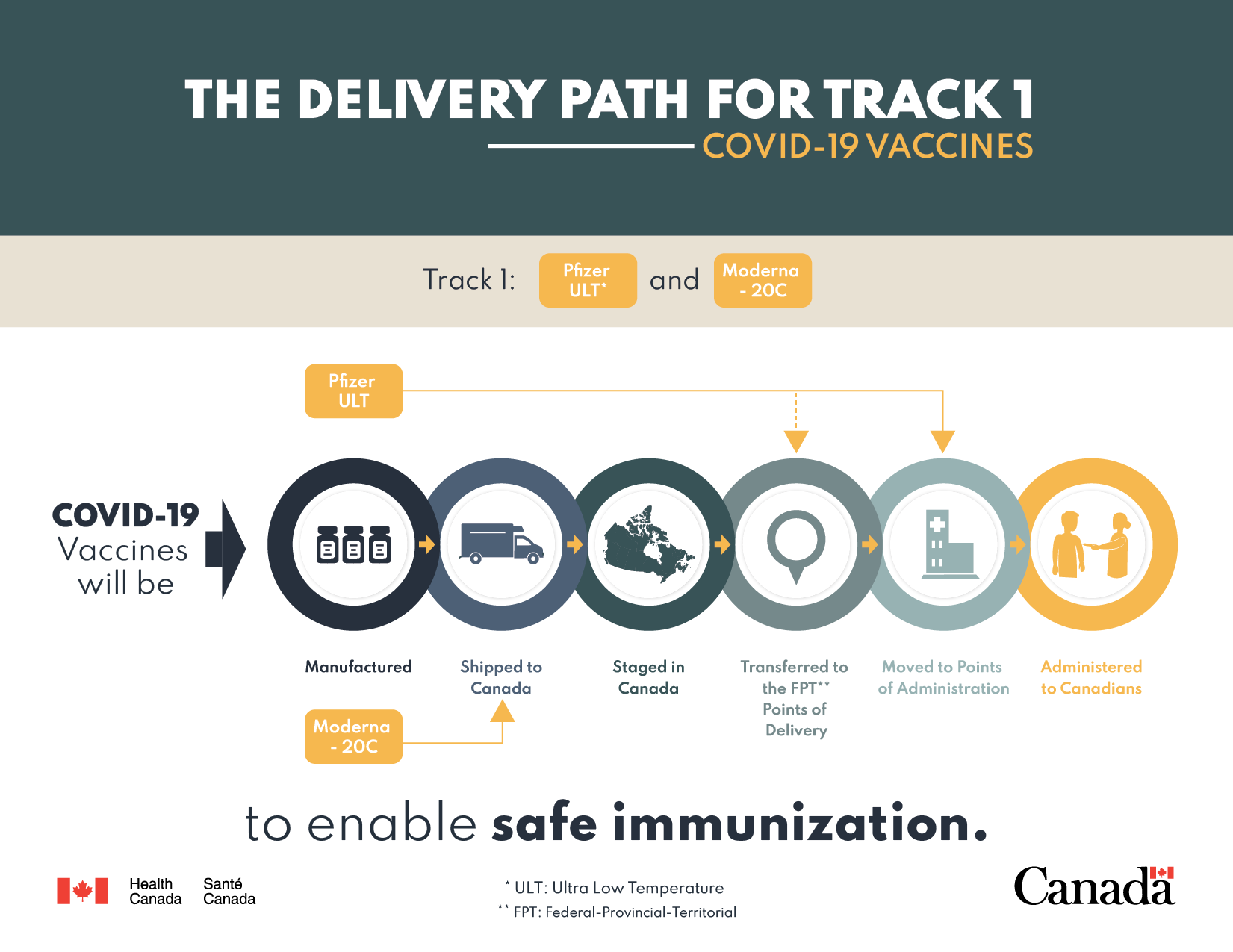 Deputy chief public health officer Dr. Howard Njoo said Thursday that he is “optimistic” that reviews of Pfizer, Moderna and several other vaccines will be complete soon, and expects the Pfizer one to be “a favorable one.”

The federal government plans to give three million Canadians the first round of coronavirus vaccines when they are approved and arrive in the country, Njoo said.

“We will immunize as many Canadians as possible, as quickly as possible and ensure that high-risk populations are prioritized,” Njoo said. “We expect certain Health Canada-approved vaccines to become available in early 2021. The initial supply of these vaccines will be limited, such that we will be able to vaccinate around three million Canadians. That means we need to be strategic on who gets vaccinated first.”

He said the National Advisory Committee on Immunization will release guidelines in the coming days that will help identify who receives the COVID-19 shots first, he said.

“Although the initial supply will be limited I want to be clear there will be enough vaccines for every Canadian,” Njoo added.

Speaking at a vaccine conference, she said the country is working to further refine the list of who gets the vaccine first, since the initial six million doses expected to come in early 2021 — enough for three million people — aren’t enough for everyone on the national vaccine advisory committee’s list of priority groups, which include the ill and elderly, health-care workers, essential workers and Indigenous communities.