A majority of Canadians say they still agree with prolonged shutdowns and restrictions to combat the spread of the novel coronavirus, according to a new poll — though almost half say they are getting tired of those same precautions.

According to new polling from Ipsos, over seven out of 10 Canadians indicated support for a four-week shutdown of non-essential businesses in order to combat Canada’s growing numbers of new COVID-19 cases, while another 87 per cent say they intend to continue taking health precautions seriously until the spring.

Ipsos CEO of Public Affairs Darrell Bricker said it isn’t surprising that they’ve seen a consistent majority of Canadians supporting stronger measures in order to get through the pandemic.

“I know that it seems like sometimes when you see on the news that there are groups of people who are really upset about what’s going on, but the truth is, when you ask the vast majority of Canadians, they do believe that we should be taking pretty strong measures when it comes to trying to shut things down in order to get us through this pandemic” said Bricker.

“You would think that Canadians would be really getting frustrated with the cost they’re being asked to bear in order to deal with with this crisis, but the truth is they’re persistent, they’re resilient. Not very many of them are are planning to change their behaviour anytime soon, and they’re willing to do their part to fight back this pandemic.”

Despite more than half of all Canadians indicating they would follow those health guidelines for the foreseeable future and over nine in 10 Canadians saying they are doing their best to follow lockdown restrictions, a significant amount indicated they are feeling fatigued by the safety precautions set in place because of the virus.

According to the poll, nearly half of all Canadians — 48 per cent — said they were fed up with mandated social distancing and face mask wearing. Of the respondents surveyed, most provinces averaged around the same number except for Quebec, which saw over six out of 10 residents saying they were tired of the restrictions.

“Yeah, Canadians are getting fatigued,” said Bricker. “It’s more about just toughing it through as opposed to actually celebrating what it is that we’re doing.”

Tying into coronavirus fatigue, the poll also revealed that over 3 out of 10 Canadians admitted to becoming less strict when following public safety measures since the start of the pandemic.

Bricker said that there’s several reasons for the increasing laxity, with one being that Canadians are getting a better understanding of when and when not to follow those guidelines and another being that they’ve also been under lock down for a very long time.

“As a result of that, it’s pretty hard to not colour outside the lines,” Bricker said, noting that the number is expected to go up as COVID-19 restrictions persist. 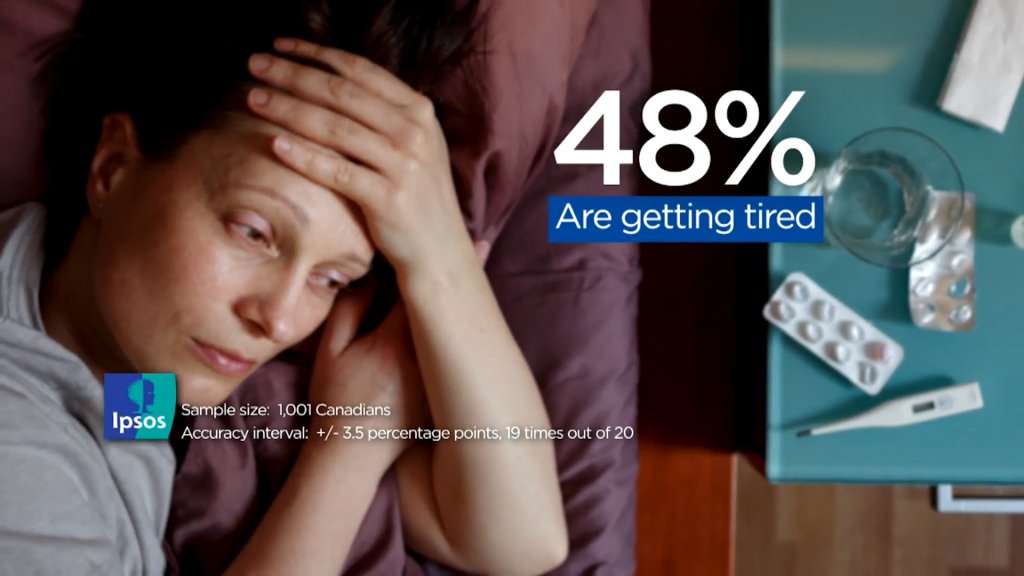 “Every once in a while, people are going to be human and human beings aren’t perfect and they recognize the fact that that they are stepping outside some of these of these requirements and conditions.”

The poll also asked Canadians on whether they supported extending school closures over the upcoming holidays, with 72 per cent agreeing that a four-week shutdown would help decrease the spread of the virus as opposed to two weeks.

Read more: The coronavirus rent subsidy caps how much business chains can get. Is that unfair?

The idea of wearing a face mask is still strongly accepted as a necessary measure across most of the country too, with 88 per cent of Canadians agreeing with mandatory facemasks in public spaces — an increase in two points since October. Those living in Ontario are significantly more likely to support wearing face masks, however, in comparison to B.C. and the Prairies which saw 83 and 79 per cent agree, respectively.

Lastly, three per cent of Canadians said that they plan to revert to their pre-pandemic behaviour come the new year, and another nine per cent indicated that they are losing patience and are planning to go back to their normal routine “very soon.” 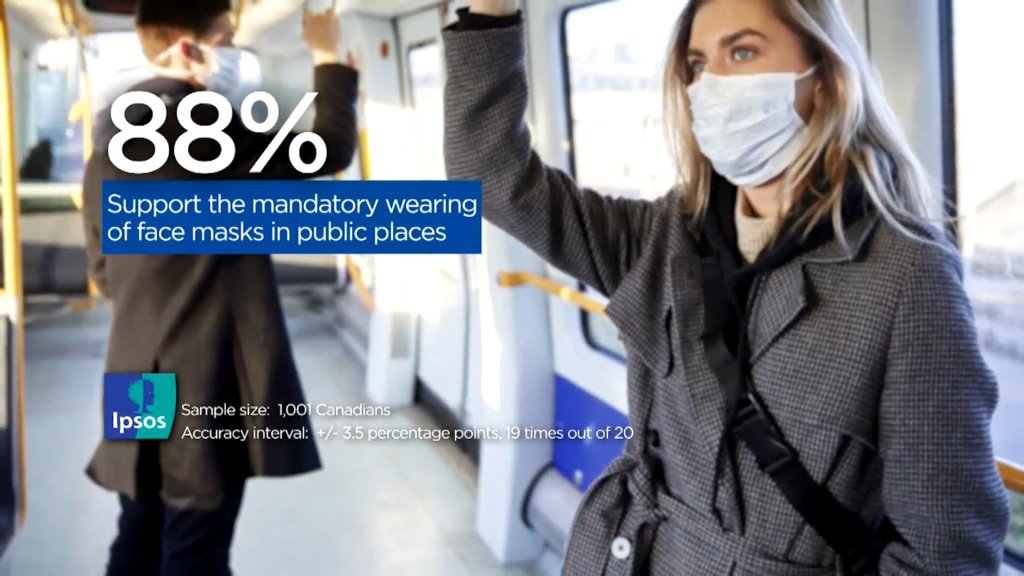 Bricker said that the New Year typically represents a sort of “watershed” for most Canadians, and that some groups are at the very least likely to break away from continued health restrictions regardless of what happens in 2021.

“So I would say that the lockdown, even though we’ve been incredibly disciplined about it … the sand in the sand dial is starting to run out and the impatience is definitely there, and I think by the time we get to the new year, you might see those numbers start to grow of people who are prepared to start breaking the rules more frequently.”

METHODOLOGY: This Ipsos poll was conducted online between Nov. 20 to Nov. 23, 2020. Quotas and weighting were employed to ensure that the sample’s composition reflects that of the Canadian population according to census parameters. The precision of Ipsos online polls is measured using a credibility interval. In this case, the poll is accurate to within ±3.5 percentage points, 19 times out of 20, had all Canadians aged 18 and over been polled. The credibility interval will be wider among subsets of the population. All sample surveys and polls may be subject to other sources of error including, but not limited to, coverage error and measurement error.