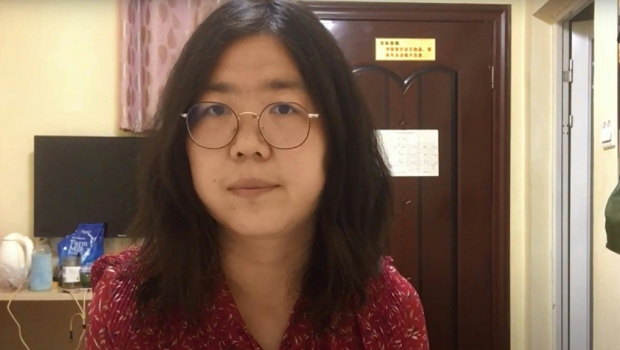 BEIJING — Zhang Zhan’s footage of bedridden patients lining a hospital corridor in Wuhan gave a rare, unvarnished glimpse from China’s coronavirus ground zero in the first months of the pandemic.

The video was one of many that helped land the citizen journalist and former lawyer in jail, where she has been severely weakened by a hunger strike to protest her treatment.

In another clip, Zhang calmly faces down a security officer who accosts her and orders her to stop filming.

“It’s my right to monitor the government,” she says, as the man attempts to snatch away her phone.

Zhang has become “symbolic” of the quest to uncover what happened in China at the start of the COVID-19 outbreak, her lawyer said.

But sharing her amateur footage with the wider community came at a high price for the 37-year-old.

She was detained in May and, seven months later, sentenced to four years in jail for “picking quarrels and provoking trouble”.

Her real crime, however, seems to have been publishing a narrative of the pandemic that China does not want to be told.

Beijing’s version extols the strong leadership of the Communist Party in the health crisis while glossing over the fear, confusion and criticism over early handling of the issue.

Zhang decided to travel to Wuhan from Shanghai in February 2020, after an online post by a Wuhan resident motivated her to find out the truth behind the outbreak.

“He said he felt like he was left there to die, I was very touched by what he wrote,” Zhang said in a documentary about her by an anonymous filmmaker, posted on the website China Change.

By then, officials had put the bustling transport hub under an unprecedented lockdown as they scrambled to contain the mysterious new virus that soon became known as COVID-19.

From Wuhan, Zhang posted footage filmed on the streets, and she questioned issues such as access to virus testing and hospital capacity.

She also tried to campaign for grieving relatives of COVID-19 victims, who were seeking compensation.

“She went to Wuhan with sympathy and a desire to help people,” said one of her lawyers, who asked not to be identified.

“Will tragedies like this happen again and again because the factors behind them are not resolved, and the system creating the tragedy is still running?” he asked.

Several other citizen journalists also travelled to Wuhan during the early stages of the outbreak, but Zhang is the first to face trial.

Behind bars, Zhang’s health has deteriorated.

She has been on hunger strike and force-fed through nasal tubes with her limbs restrained for long periods, according to the lawyer.

She had become very thin and almost unrecognisable by Christmas.

“By not eating, she wants to protest against the illegal nature of her treatment,” said Zhang Keke, a member of her legal team.

“She believes that not eating is a way to tell them they are wrong.”

When she appeared in court later in December, she was frail in a wheelchair, but defiant.

She spoke little during the trial and refused to answer a judge who asked her to confirm her identity.

While she has become a symbol of resistance abroad, at home she meets a mixed response.

On the day of her trial, around a dozen supporters and diplomats gathered outside the court to show support.

“What she has done is totally unselfish, completely disregarding her own interests, and all for the benefit of society,” Ren Quanniu, another of her lawyers, told AFP.

But online, she has been accused of having “bad intentions” and asked who was sponsoring her messages.

Despite her critics and her deteriorating health, she has refused to appeal.

“She believes the whole system is absurd,” said Zhang Keke.

“Zhang Zhan wouldn’t compromise… (She said) that she has never been so determined.” 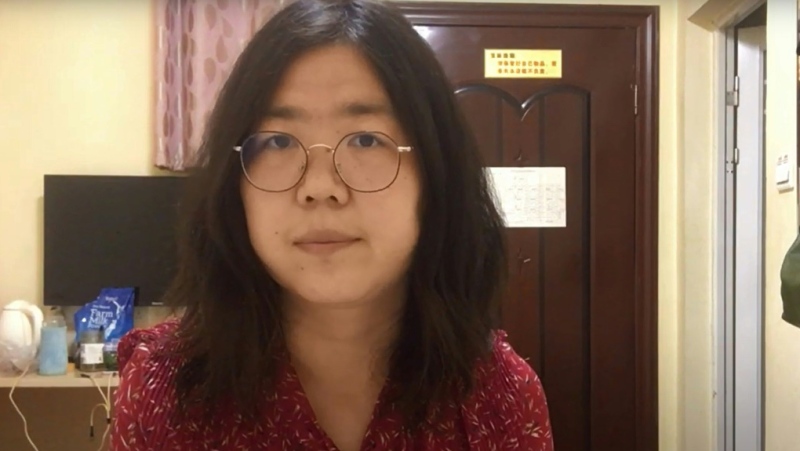