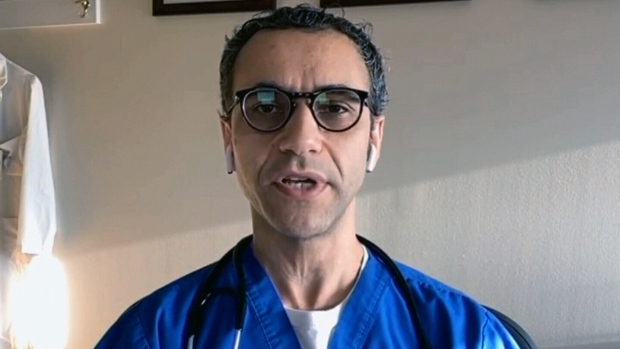 “This pandemic is only over for people who don’t survive it,” wrote Toronto physician Dr. Abdu Sharkawy in a tweet Friday about the couple’s death.

He hopes to convince those believing the worst of the pandemic is over that it’s not the case, especially in Ontario and Quebec.

Sharkawy, who is a CTV News medical correspondent, says he cannot divulge anything about the patients for privacy reasons, including their ages or what hospital they were in.

“It doesn’t matter if they were 108 or 55, it’s a tragic situation,” he told CTVNews.ca in a phone interview.

“There are so many of these situations that wouldn’t have been imaginable before the pandemic. I’m hearing from colleagues who are sharing stories of father and sons, aunts and uncles, grandmothers who are dying together.”

The tweet was shared and liked more than 1,200 times in a few hours. Several physicians weighed in with comments.

“Awful news. No where near over as those of us in the ERs, ICUs and medicine wards know too well,” wrote Toronto emergency physician Dr. Brant Slomovic. “Would be so instructive if we had a clue where new cases are coming from, true risks, etc.. And also if there were a semblance of uniform, strong messaging from those making policy.”

Sharkawy says he and many of his peers are frustrated by a lack of containment of the virus in Ontario and Quebec, as both provinces move ahead on lifting restrictions, and by the behaviour of those who don’t seem to be taking precautions seriously.

“Those of us on the frontlines feel as though we are holding back a dam from breaking. And we are not confident that we have the reinforcements behind us or enough oversight or understanding about how much water is behind that dam.”

“The evidence shows that by every measure the outbreaks in health care settings are not under control and that more effective measures are needed to protect residents, patients and staff,” the coalition said in a news release.

“While the number of facilities in outbreak has stabilized, the numbers of residents/patients and staff infected in outbreaks and, tragically, dying, are still growing at a significant rate.”

Close to 4,800 health-care workers have been infected, or about 16.5 per cent of the total in Ontario, says the coalition. The province has seen 615 outbreaks in care settings, including 386 that have been resolved.

Active outbreaks have dropped over the last two weeks, but the coalition warns that may because “there is less public reporting now than there was in April through to early May.”

A total of 6,711 patients and residents in Ontario have contracted the virus in care settings and 1,919 have died.

The toll of the virus is much different in Canada’s prairie and Atlantic provinces, says Sharkawy. Daily case numbers, deaths and testing levels are all reasons for vigilance and caution in Ontario and Quebec.

Ontario Premier Doug Ford announced Friday that his government will release details on the second stage of restarting the economy early next week. He also said new lifting of restrictions – expected to include allowing a wider number of office-based businesses to reopen and expanding allowed maximum of social gatherings beyond the current five – will not come into effect right away.

The province has previously said loosening restrictions would come after a consistent decline in cases over a two- to four-week period.

But daily new cases have been trending upward for about a week. There were 344 new cases announced Friday, the same number as the previous Friday. The average daily case growth was 360 for the past seven days.

The province did announce it had completed 20,822 tests in the 24 hours leading into Thursday morning. That’s more than any other day.

More than three-quarters of the province’s active cases are in the Greater Toronto and Hamilton Area, yet Sharkawy is alarmed and disturbed to see people hugging neighbours on the street or gathering together in large numbers to share food. He wishes they could experience a day in his hospital.

“They should look around at the people dying and the families destroyed by this pandemic. Their lives will never recover.”

The public needs to understand we are all connected together in a chain, he says. What someone does on one side of a city can drastically impact someone on the other side.

Do your part to protect others by wearing a mask when out in public, Sharkawy urges. New Brunswick, which has had a single death due to COVID-19 and has 14 active cases, made that mandatory to enter any public building, including stores and restaurants, beginning Tuesday.

The doctor would like to see more provinces take that step.

He says the data shows that universal masking is an effective means to slow transmission.

“It’s a pretty easy thing to do, whether you’re at a demonstration for a cause you passionately believe in, or you’re going to a store, or you’re on the TTC. Put on a mask.”

Husband and wife admitted to hospital a few days ago with CoVid-19. They died in the same room last night 3 minutes apart. This pandemic is only over for people who don’t survive it #PatienceNeeded #StayAwareStayAlive 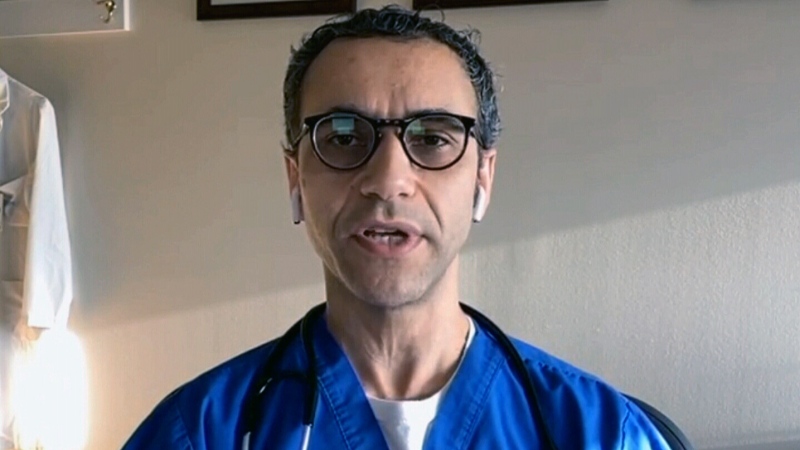