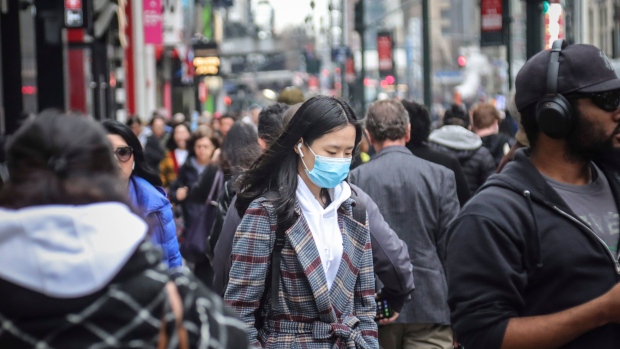 The term “asymptomatic transmission” has been buzzing around as scientists attempt to determine how people with mild to no symptoms of COVID-19 are contributing to the global spread of the virus.

But a Canadian infectious disease expert believes the word asymptomatic — which literally means no symptoms — is misleading.

Subclinical is what we should be calling it, he says.

Dr. Isaac Bogoch, an infectious disease physician and scientist based out of Toronto General Hospital, says subclinical refers to people who “just aren’t sick enough to come to hospital,” a distinction that can vary from person to person, and from country to country.

“Subclinical is an umbrella term that refers to people that have the spectrum of symptoms ranging from the most mild to whatever the threshold is for seeking health care,” Bogoch said in a phone interview with The Canadian Press.

“And that’s an important point because if you’re not seeking health care, you’re not identified, you’re not diagnosed, and you can be infected and transmitting this infection in the community.

“In the language that I speak, asymptomatic really means asymptomatic,” he said, explaining the term could be misused because it refers to zero symptoms and would not include those with mild symptoms that also don’t require medical care.

“The fact that they’re not sick enough to seek health care is the important point.”

A study by researchers in Singapore published this week estimated that somewhere around 10 per cent of novel coronavirus infections may be sparked by people who carry the virus but have not yet developed its flu-like symptoms — so-called pre-symptomatic transmissions.

The newest research, published online by the CDC Wednesday, focused on 243 cases of COVID-19 reported in Singapore from mid-January through mid-March, including 157 infections among people who had not travelled recently.

An earlier study that focused on China, where the virus was first identified, suggested that more than 10 per cent of transmissions were from people who were infected but did not feel sick when they passed it on.

While people presenting mild to no symptoms would generally be weaker transmitters of a virus, Bogoch said a group of them could be trouble.

“There may be a significant number of people who are subclinical,” said Bogoch. “And even though these individuals by and large on average are shedding less virus than people with overt symptoms, there are enough of them around that they can be contributing to transmission.

Dr. Gerald Evans, an infectious disease specialist at Kingston General Hospital in Kingston, Ont., said knowing the number of cases that are presenting mild to no symptoms could help us further understand the virus in many ways.

One of the most important might be providing a clearer fatality rate.

Evans, who’s also the Chair of Queen’s University’s infectious diseases division in Kingston, said that for every one symptomatic person there “might be as many as 10 people out there who are either asymptomatic — absolutely no symptoms — or so mildly symptomatic.”

The problem with trying to track the number of those cases is that it’s almost impossible to do. If a person is not above the threshold of seeking medical care, they’re also not getting tested.

“They never feel sick enough to need medical attention so they’re falling under the radar, right?” Evans said. “We weren’t testing those people because we didn’t even know.

“And some of them don’t even think they had it.”

Bogoch said the current testing methods are sensitive enough to detect the virus in a case with few to no symptoms.

“If you’re shedding, it will pick it up,” he said.

Bogoch cautioned that while there’s been plenty of attention given to subclinical spread lately — “and appropriately so” — that shouldn’t distract from the fact there are cases with overt symptoms that are actively shedding the virus.

These symptomatic people, he said, may be transmitting COVID-19 to their close contacts throughout the various stages of their infection.

— With files from The Associated Press

This report by The Canadian Press was first published April 3, 2020.