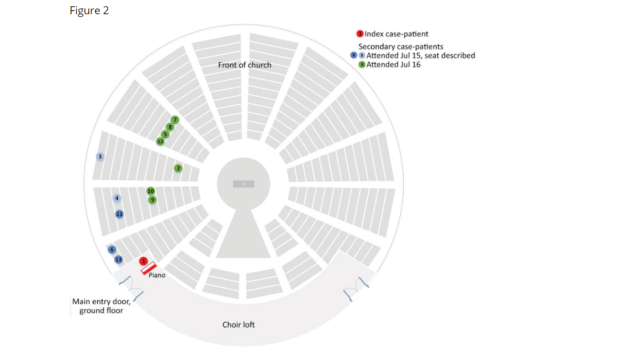 TORONTO — A study in Australia has tracked a church-related outbreak of SARS-CoV-2 thought to be spread through the air by an infected choir member singing while physically distant from others at the services.

The study, entitled “Epidemiologic Evidence for Airborne Transmission of SARS-CoV-2 during Church Singing, Australia 2020” is set to appear in the June 2021 volume of the Emerging Infectious Diseases journal published by the U.S. Centers for Disease Control (CDC).

The researchers examined an outbreak of SARS-CoV-2, which is the virus that causes COVID-19, after an infected chorister sang at multiple services in Australia.

Video recordings of the church services showed that the 12 people identified as secondary cases, while sat in the same general section as the chorister, were approximately one to 15 metres away from him and behind him – suggesting airborne transmission.

On July 18 2020, the Western Sydney Public Health Unit (WSPHU) was notified of a positive SARS-CoV-2 test for an 18-year-old man, after he learned he had a potential exposure risk from a different venue he attended on July 11.

The man reported symptoms on July 16 to July 17, and told public health that he sang at four 1-hour church services: one service each on July 15 and 16 and two services on July 17, which was during his infectious period.

The man sang from a “choir loft” which was elevated 3.5 metres above the congregation, and he denied touching objects in the church or mixing with the general congregation below, something video recordings of the church services corroborated, the study states.

Researchers identified close contacts to the man, including 10 other chorists and staff who were required to quarantine. On July 19, the church informed the community of the positive case, prompting testing amongst members.

On July 20, WSPHU was informed of two more cases of SARS-CoV-2 in church members who attended church on July 15 and 16 – neither of whom was known by the man.

The researchers determined that, based on CDC COVID-19 control guidelines at the time, anyone who had spent up to 15 minutes face-to-face or shared a closed space for two hours with the man constituted a close contact, and therefore classified all attendees of the four services he sang at as such.

WSPHU then required all attendees to quarantine and requested testing for SARS-CoV-2 regardless of symptoms – public health contacted church members through mandatory service sign-in records and released alerts through the church and local media, and then established a testing clinic on-site.

WSPHU recorded 12 secondary-case patients from the 508 attendees; five attended church on July 15, seven on July 16 and one attended on both July 16 and 17.

The study notes five of the secondary-case patients were from the same household as the two SARS-CoV-2 cases identified on July 20 and therefore might have been infected at home, rather than the church.

No deaths were reported from the outbreak, but three case-patients were hospitalized, two of whom required intensive care.

Researchers wanted to understand the mechanics of the virus spread, and plotted where case-patients were sitting relative to the man at the time of service – reviewing video recordings and conducting interviews with attendees.

The church was round and pews distributed circumferentially, the study says. Researchers were able to determine the exact location of 10 out the 12 secondary-case patients by reviewing video recordings – the remaining two described their location by listing the section and row.

All secondary-case patients sat within a 70 degree section below the man in the choir loft and between one to 15 metres away from him. The man used a microphone, was facing away from them and masks were not worn. Cases were not detected in attendees seated in other sections, the study notes.

Upon inspection of the church, researchers noted over two site visits that the church had a high conical roof, the ventilation system was not in operation during the services, windows and doors were largely closed except for entrances and exits of attendees and wall fans were off – meaning there was minimal ventilation.

Researchers believe that transmission of SARS-CoV-2 in this outbreak is best explained by airborne spread, potentially the result of three factors.

First, singing has been demonstrated to “generate more respiratory aerosol particles and droplets than talking.” Secondly, minimal ventilation “might have enabled respiratory particles to accumulate in the air” and air currents may be carried said particles toward the pews where the secondary-case patients were seated during service. Third, researchers noted that the man was likely near the peak of infectiousness and symptom onset around the exposure dates, the study states.

This cluster outbreak occurred “despite adherence to guidelines requiring microphone use and a three metre cordon around singers,” the study notes, adding that public health guidelines were tightened after this cluster was detected, with a five metre distance now required around singers.

The study notes that “additional mitigation measure might be necessary to prevent airborne infection during church services and singing,” including increased ventilation or moving services outside. 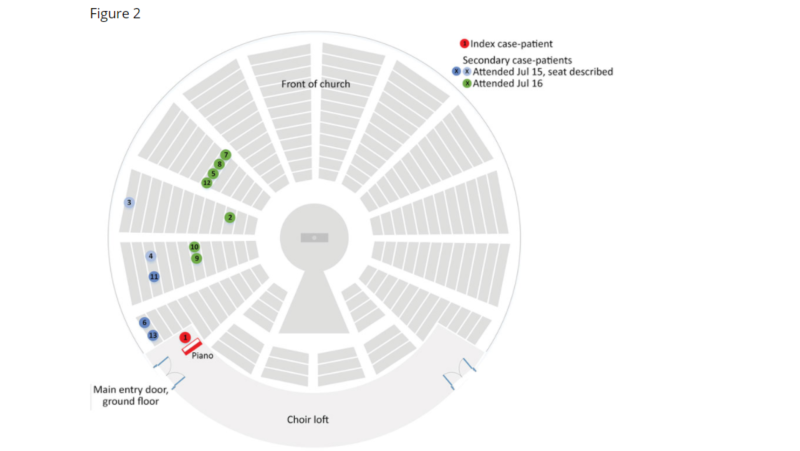