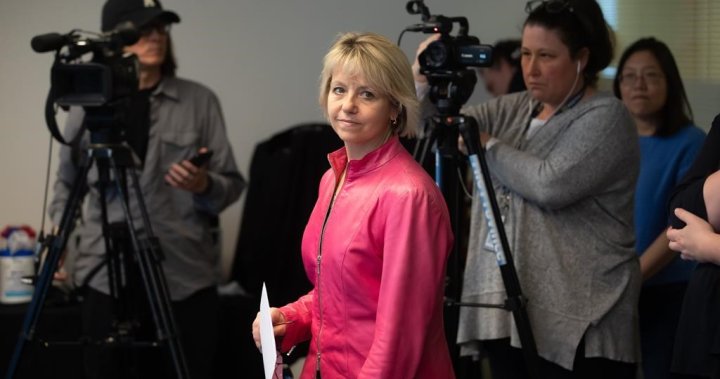 It’s been one of the basic mantras of the COVID-19 pandemic in Canada: keep two metres apart to stop the spread of the virus.

But that guidance has now changed, at least in some circumstances.

At her Thursday briefing, B.C.’s provincial health officer Dr. Bonnie Henry said a one metre spacing can be good enough in school and workplace settings.

Speaking with CKNW’s Lynda Steele Show Friday, Henry said a metre’s distance has traditionally been what epidemiologists recommend when dealing with droplet-spread viruses like the flu.

With so little known about the novel coronavirus at the beginning of the pandemic, officials opted for a safer two metres, she said.

In the months since then, Henry said that public health experts have learned that there is a continuum when it comes to safe distances.

“If you are with people who are in different networks and you don’t know them, like at a party, you’re coming into close contact for periods of time and then people are mixing around, those are higher-risk environments,” said Henry.

“Those are the environments where, particularly right now, we want to keep those two metre distances.”

Those situations, according to Henry, are very different from a school or workplace where people know one another and measures are in place to keep sick people away.

“If we’re sitting at a desk and we’re facing forward, and we’re not talking to each other … those are very low-risk environments,” she said.

“We’re sitting next to the same people all the time so it’s not like we’re having close contact with a whole group of random people who are then going to other places.

“It’s a much more controlled and safer environment.”

The one-metre guidance comes as British Columbian students prepare to head back to the classroom.

The BC Teachers’ Federation and some parents have expressed concerns that students will not be required to maintain two metres of physical distance, and have called for smaller classes and mandatory masks for older students.

Henry told CKNW the new guidance had nothing to do with pressure regarding the back to school plan, but came from public health officials learning from new evidence.

“Everybody wants it to be black and white and it’s not, and it’s changing,” she said.

“We all continue to change and adapt and and look at what we need to do to prevent transmission and a whole variety of situations.”