One in five Canadians are “cynical spreaders” — those who disregard safety precautions meant to curb the spread of the novel coronavirus — according to a survey by the Angus Reid Institute.

The online survey was conducted on a randomized sample of 1,511 Canadians between Aug. 5 and 8.

Respondents were scored based on 10 public health guidelines, including how often they wore masks indoors, kept at least two feet apart from others, avoided public spaces and adhered to social distancing rules, avoided physical contact and washed their hands.

Participants who followed COVID-19 safety guidelines — dubbed “infection fighters” — comprised nearly half the population at 47 per cent. Those who were inconsistent in compliance represented just over one third of Canadians surveyed at 36 per cent. 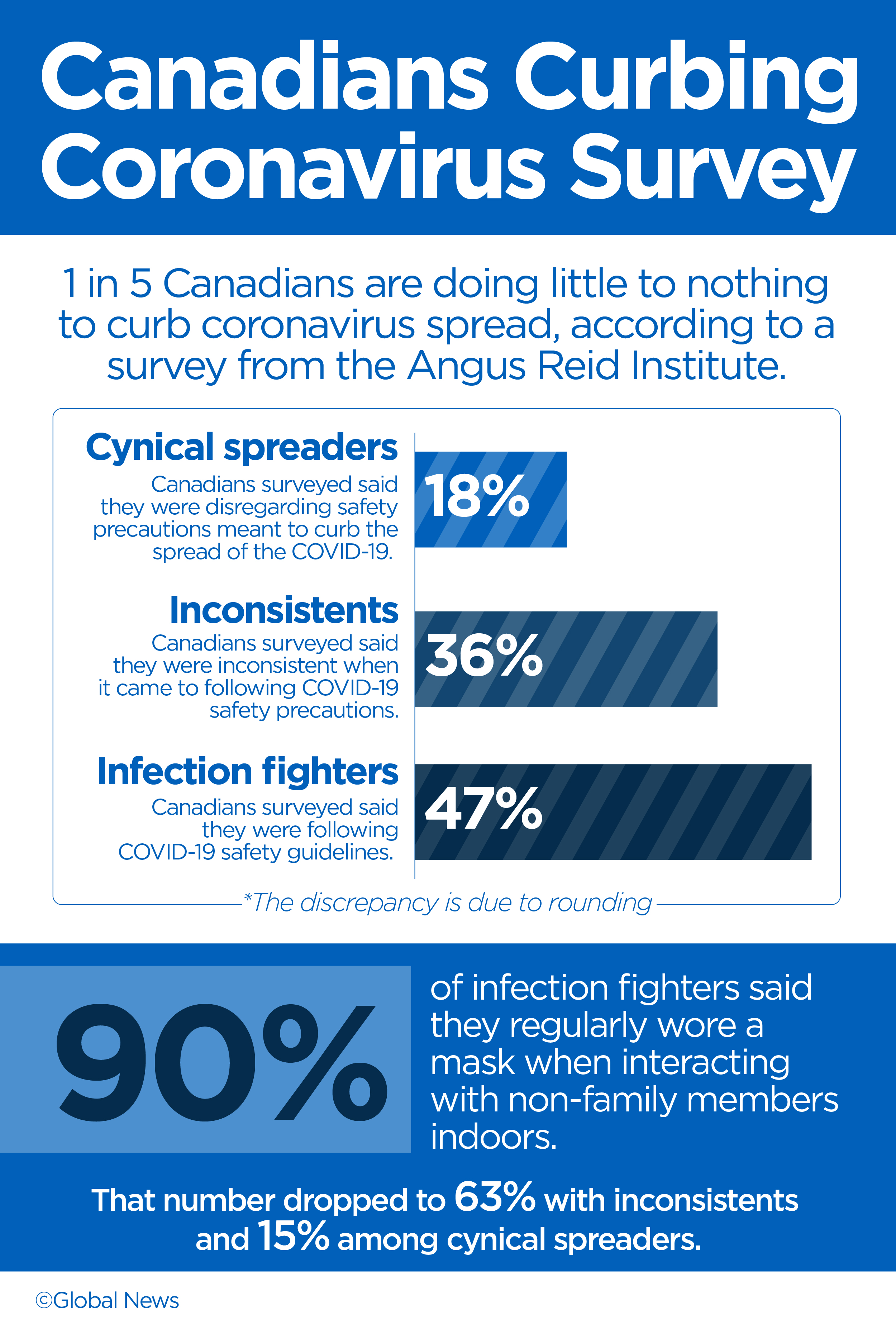 The remaining one in five — the “cynical spreaders” — made up 18 per cent of respondents.

“This last group also professes a clear dislike for the way public health officials and political leaders have handled the pandemic,” the survey found.

More than 30 per cent of cynical spreaders said they “rarely, if ever, use a mask when they are indoors around people they do not live with,” whereas 94 per cent of infection fighters noted mask-wearing as regular practice.

Inconsistents were more likely to wash their hands and wear masks, but less likely to stay at home or keep their social circles small.

More than 70 per cent of infection fighters said they were seeing five or fewer people while 53 per cent of cynical spreaders reported seeing more than 10.

Ninety per cent of infection fighters said they regularly wore a mask when among non-family members indoors. That number dropped to 63 per cent with inconsistents and 15 per cent among cynical spreaders.

Shachi Kurl, executive director of the Angus Reid Institute, said age was one of the most significant factors in terms of compliance.

“Cynical spreaders who tend to be found among those younger age cohorts, they’re far less likely to be practicing hygiene. So whether it’s hand washing or maintaining social physical distance or wearing a mask, those are just things that are not happening,” she said.

Younger Canadians surveyed were four times as likely as those aged 65 and up to be ignoring COVID-19 prevention measures.

Read more: These are the most likely — and least likely — ways to spread COVID-19

Both men and women under the age of 35 were least likely to be following COVID-19 protocols, avoiding travel, and minimizing their social bubbles, while men and women aged 54 years and up reported being much ore careful, and more likely to support stricter COVID-19 restrictions.

Those who voted for the Conservative Party in the last federal election were four times less likely engage in actions that would reduce the spread of the virus than participants who voted Liberal or NDP.

The results also varied by province. Respondents from Ontario, one of the provinces hit hardest by the coronavirus pandemic, were most likely to do more to curb the spread of COVID-19 than any other province.

Participants from Alberta, Saskatchewan, and Manitoba were most likely to engage in riskier behaviour, with 30 per cent of residents in each province falling into the category of cynical spreaders.

“People’s own behaviours are driven by what they themselves have experienced in their own communities,” Kurl said.

In Ontario, for example, she said residents were still being “ultra cautious” because of how long it took for case numbers to drop and its economy to reopen.

Whereas in British Columbia, which was one of the first provinces to reopen, Kurl said “there can be a sense of safety or a sense of a greater carefree sense wherein people are of the view, even though we’re now starting to see more cases.”

In more rural, sparsely populated parts of Atlantic provinces like Manitoba or Saskatchewan, she added residents may not feel like they need to engage in social distancing because of how spread out they may be already.

With that in mind, Kurl said the fact that “half the country reporting that they’re doing almost everything they can to stop the spread is pretty heartening.”

Colin Furness, an epidemiologist and professor at the University of Toronto, echoed her statements. He said the numbers were concerning, but nothing to be frightened over.

“It could be worse,” he said. “If you’ve got 80 per cent of people who are preventing the infection from happening, that ought to be about enough.”

Furness said he would have expected a larger number of cynical spreaders than 18 per cent.

“People dislike COVID-19. They dislike masks, they dislike the restrictions. It’s exhausting. It’s ruined the summer. It’s a bummer. So, yeah, you’re going to have a negative shift in those attitudes,” Furness said.

With flu season just a couple months away, he said it was important to develop good habits and remain vigilant.

“Things aren’t going to get safer than they are now,” he said. “It’s going to be really important that public health maintains the message that people maintain this.”