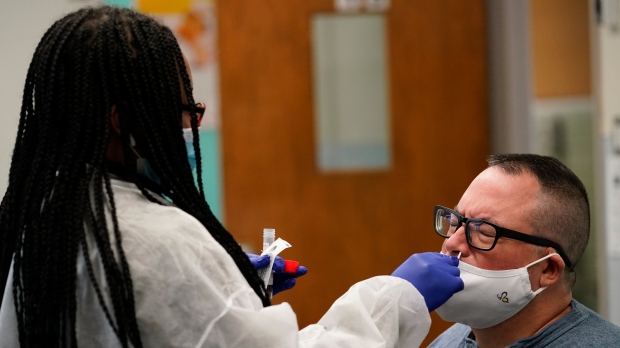 There have been 87,164 COVID-19 cases reported in the United States as of Thursday night, according to data from Johns Hopkins University, by far the most new cases in a single day since the pandemic began.

The previous high was just six days ago, when there were 83,731 new cases reported.

The staggering total comes as the number of coronavirus cases in the United States nears 9 million in the first nine months of the health crisis.

Across the country, 41 states had at least 10 per cent more new COVID-19 cases this past week compared to the previous week, according to data from Johns Hopkins. No states saw a decline of cases that was 10 per cent or more.

Dr. Scott Gottlieb, former commissioner of the U.S. Food and Drug Administration, said he believes 100,000 new cases per day in the U.S. is imminent.

“We’ll cross 100,000 infections at some point in the next couple of weeks, probably. We might do it this week, if all the states report on time,” Gottlieb said.

Gottlieb, who was appointed by U.S. President Donald Trump to lead the FDA in 2017, said this surge is due to the public’s behaviour and lack of caution.

“The reality is that I think we’re not going to start to see a slowdown in the pandemic until you see consumer behavior change, and until you see mobility data start to decline,” he said.

“That’s been the lesson of the past surges in the virus.”

Deaths from the virus are also on the rise and the Centers for Disease Control and Prevention forecast the death toll from COVID-19 could rise to as high as 256,000 just before Thanksgiving.

The ensemble forecast, published by the CDC Thursday, projects the best-case scenario is 243,000 deaths — and the worst-case is 256,000 deaths — by November 21.

At least 228,143 people have already died from COVID-19 in the United States, according to data compiled by Johns Hopkins University.

There have been 8.94 million cases reported, the university says.

These days, many COVID-19 high marks are short-lived as states grapple with skyrocketing infections and hospitalizations.

For the second time in five days, Ohio set a new high for most new COVID-19 cases in one day — 3,590, Gov. Mike DeWine said Thursday.

Ohio also saw its third-highest day of COVID-19 hospitalizations in the past 24 hours.

“The virus is raging throughout the state, and there is no place to hide,” DeWine said.

“We must face this virus head-on with the tools that we know can beat this virus back: masks, social distancing, washing hands frequently, and good ventilation when inside.”

North Dakota broke its record for daily new cases Thursday — the second time in a week — with 1,222 new infections reported. About 13 per cent of staffed hospital beds remain available in the state.

The average number of daily new cases this past week is up 24 per cent compared to the previous week, according to Johns Hopkins.

But testing has increased only 8.52 per cent over the same time frame, according to the Covid Tracking Project.

Hospitals are getting stretched thin

At least 13 states reported highs in hospitalizations reports, according to the Covid Tracking Project.

Hospitalizations in Tennessee are rising at “an alarming rate right now, with records set every day,” Dr. Wendy Long, president and CEO of the Tennessee Hospital Association, said Wednesday.

Hospitals “are doing all that they can do to increase capacity, but their ability to do that is not limitless,” she said.

“That is especially true as we see more and more health care providers who are becoming ill from the virus and having to quarantine at home.”

And Illinois is “getting close to the entire state implementing mitigation measures,” state officials said.

Health experts have traced many of the recent infections to casual get-togethers among friends and family.

“We too often let our guard down when we are with people we know and trust,” North Carolina Gov. Roy Cooper said. “But knowing and trusting doesn’t stop the virus.”

Mask mandates may be a key strategy to lowering rates of hospitalization, according to the findings of a study from Vanderbilt School of Medicine.

In hospitals where more than 75 per cent of the patients came from counties that required masks, rates of hospitalizations did not rise between July and October. But hospitals with fewer than 25 per cent of patients from those counties saw an increase over 200 per cent.

Other mitigation factors likely came into play, as areas with mask requirements are more likely to have residents who follow other mitigation strategies, the authors wrote.

“The good news is that we have learned a great deal since the beginning of the pandemic,” they said.

“An important takeaway from this analysis is that areas with virus mitigation strategies … have seen lower growth in hospitalizations since the summer months; hospitals in these areas are in a much better position to serve the entire spectrum of community health needs, not just COVID-19 patients.”

A growing number of health experts from across party lines are calling for a nationwide mask mandate.

Gottlieb recently wrote an op-ed for The Wall Street Journal titled “Winter Is Coming: Time for a Mask Mandate.”

“A mandate can be expressly limited to the next two months,” Gottlieb wrote, adding that it’s easier to wear a mask in the winter than the summer. “The inconvenience would allow the country to preserve health-care capacity and keep more schools and businesses open.”

Andy Slavitt, former acting chief of the Centers for Medicare and Medicaid Services, agreed with Gottlieb on a mask mandate.

“Scott Gottlieb was a Republican. This is not a partisan issue,” said Slavitt, who served in the Obama administration.

“This is an issue for everyone’s public health, and will slow down the spread of the disease.”

And Dr. Anthony Fauci, who has worked under six administrations, said a mask mandate would help improve this deteriorating situation.

“We’re going to have many more hospitalizations and that will inevitably lead to more deaths. So, this is an untenable situation,” Fauci told CNBC on Wednesday. “That’s the reason why I say we have got to do these things.”

Health officials are urging anyone who attended President Donald Trump’s rally in Gastonia, North Carolina, on October 21 to self-monitor for symptoms and get tested if necessary.

So far, the two cases are “not thought to be an indication of spread from the rally at this time, but rather two independent cases among individuals who were in attendance,” the Gaston County health department said.

“Because of the large number of potential contacts from the rally, and the inability to alert them directly, the community is being notified so they can assess their own risk and take appropriate actions,” the health department said.

“Anyone who was in attendance at the rally is encouraged to monitor their symptoms and seek testing if needed.” 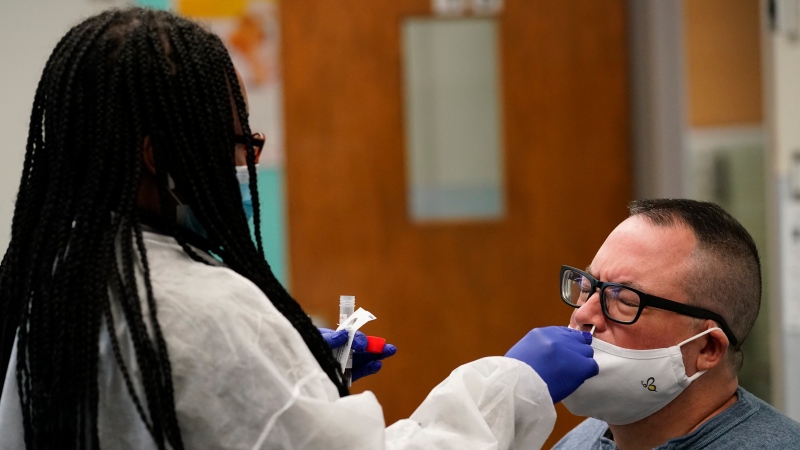