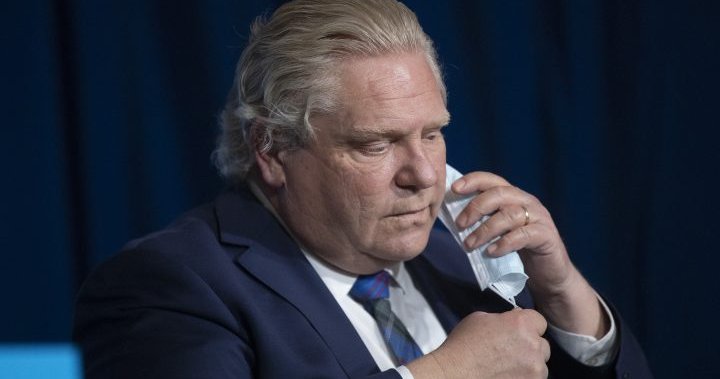 A spokesperson for Premier Doug Ford says he has begun contacting consulates in a bid to get more COVID-19 vaccines for Ontario.

Ivana Yelich said Sunday that Ford began reaching out to international allies after news of cuts to upcoming Moderna shipments, and as the province awaits a possible recommendation on lowering the age limit for the AstraZeneca shot.

“Ontario has the capacity to vaccinate more people, but we are lacking the supply to do it,” Yelich said in a statement.

“Vaccines are our only way out of this pandemic and the premier will exhaust every avenue he has in order to get more needles into arms of Ontarians sooner.”

Procuring vaccines is normally the responsibility of the federal government.

Global News has reached out to Procurement Canada and Health Canada, but didn’t hear back by time of publication

Ford has repeatedly said that Ontario has the capacity to administer more vaccines than it is currently receiving from the feds, and in late March, lashed out at the federal government’s procurement process calling it “a joke.”

Ontario is currently in the midst of a third wave of COVID-19, with cases and hospitalizations rising to record levels in recent days.

So far, 345,310 people in the province are considered to be fully vaccinated.

According to the federal government, Ontario has received 4,852,885 doses thus far.

Earlier this week, the federal government said that while Canada was due to receive 1.2 million Moderna doses this month, that had been cut down to 650,000. At the same time, Prime Minister Justin Trudeau announced that Canada would be receiving millions additional Pfizer shots, beginning in May.

The National Advisory Committee on Immunization is also discussing the current recommendation that AstraZeneca only be given to those 55 and older due to blood clot risks.

Health Canada has approved the shot for everyone 18+.

“While we wait for a federal decision on the lowering of the age limit for AstraZeneca, and in response to the latest cut in Moderna shipments, the Premier has begun reaching out to…

has in order to get more needles into arms of Ontarians sooner.”