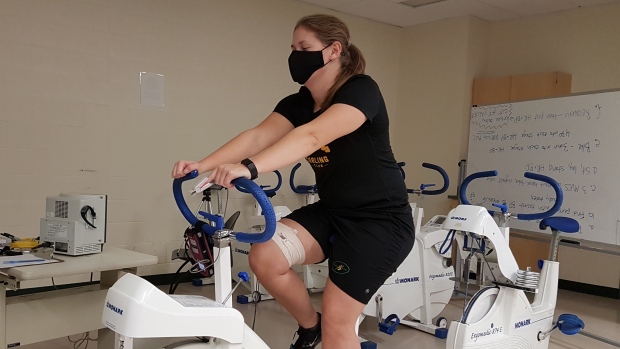 TORONTO — A small Canadian study has found that face masks do not hinder breathing for some healthy individuals during even “vigorous” exercise.

Researchers at the University of Saskatchewan measured oxygen levels in the blood and muscles of seven women and seven men during a cycle ergometry test, the “gold standard” for aerobic fitness, as they wore surgical masks, cloth masks and no masks at all.

The findings, published Tuesday in International Journal of Environmental Research and Public Health, call into question previous public health advice offered by institutions including the World Health Organization that masks shouldn’t be worn during exercise.

“People should NOT wear masks when exercising, as masks may reduce the ability to breathe comfortably,” reads WHO guidance online. Provincial public health officials in Canada have offered a range of advice on mask-wearing. In Ottawa, officials recommend masks “for any exercise within the gym that does not significantly increase your heart rate and breathing. You, the exercising person, will be the best judge of this.” While many gyms and fitness facilities across Canada require members to wear masks while entering and moving around indoors, many don’t require members to wear masks while working out, even though indoors is where the virus that causes COVID-19 is known to spread more easily.

“Our study shows the exact opposite — it has no effect.”

The aerobic cycling test required the participants to maintain a peddling cadence on the bike as the resistance was increased. The test continued until the participant was unable to maintain the same number of revolutions per minute, which was 70 RPMs, Chilibeck said. The tests averaged about 10 to 12 minutes for the participants, many of whom were recreational to elite-level athletes recruited by Paralympic cyclist and University of Saskatchewan graduate student Keely Shaw, who led the study alongside Chilibeck. Researchers measured no difference in arterial oxygen saturation (oxygen in the bloodstream) or the tissue oxygenation index (oxygen in muscles).

Another measure the researchers used in the study was a participant’s “perceived exertion,” or how they were feeling throughout the test on a scale of one to 10, from very comfortable to exerting their “maximum effort.” A mask, whether surgical or cloth, did not affect those results either, said Chilibeck.

Masks used in the study included three-ply surgical masks and three-layer cloth masks — which are the new public health standard for cloth face coverings — both varieties purchased at a local pharmacy.

A similar, larger study is under review for publication in Texas, where one participant said the mask didn’t seem to affect her short-term performance, but felt it might impact endurance for longer exercise. Another participant told KXAN-TV that his “oxygen saturation” was the same with or without a mask, but the exercise “felt harder” in a mask.

Chilibeck told CTVNews.ca that there are no plans for a broader study at the moment, but if they did expand the research it would include more participants and a “more typical gym workout” experiment, including a weightlifting portion. 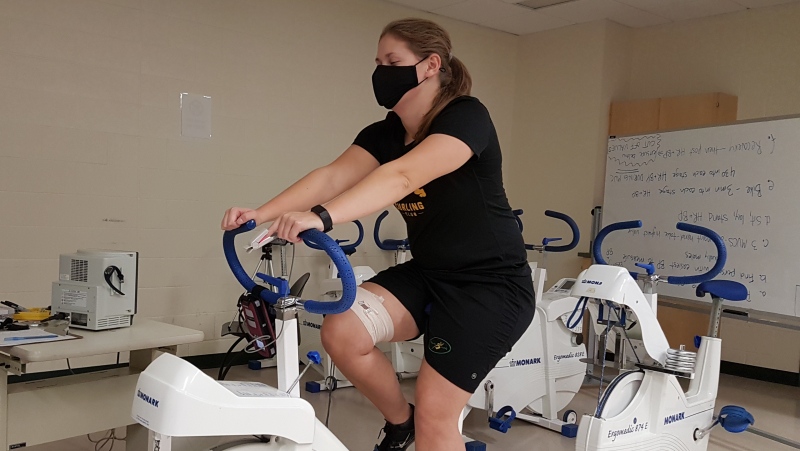