TORONTO — Halloween falls on a Saturday under a full moon and on the last day of daylight savings time this year, a seemingly perfect convergence for a memorable fright night.

But COVID-19 is a scary spectre hanging over Halloween 2020.

Though close to three months away, Halloween costumes and boxes of candy are making their way onto retail shelves and members of parenting groups are weighing in on whether little comic book heroes, fuzzy animals, or pint-sized witches and goblins will be out to collect candy this year.

Pediatrician Dr. Dina Kulik says she will wait until closer to Halloween to assess the pandemic picture to make a final decision whether her four sons will go out trick-or-treating. The return-to-school experience will be a big factor, she thinks, in whether some semblance of a normal Halloween should proceed.

“COVID could be better by then, perhaps there will be some sort of mutation like we saw with SARS. Or we could be back in lockdown. Nobody knows where we will be,” she told CTVNews.ca in a phone interview.

But if she had to make the call today, Kulik says she would probably keep her kids, who range between three and nine, at home for a party within their bubble. They just want to dress up, see their friends and get candy, and all of that can be replicated at home, says Kulik, founder of the KidCrew clinic in Toronto and a blogger on children’s health.

Epidemiologist Raywat Deonandan says if the virus caseload is higher in October than where it is now, trick-or-treating is “probably not a great idea.”

But if it’s the same or lower, then “we can probably manage some semblance of trick-or-treat.”

If that’s the case, the University of Ottawa associate professor suggests it’s safest to happen at a distance, with candy left outside or some form of no-contact sharing, and all participants outside.

HAND SANITIZER AND A CANDY HUNT

James Dark of Courtice, Ont., who has three boys ages 11, eight and four, says he will have no issue taking them out for Halloween so they can have fun and some sense of normalcy in a year that has taken so much from kids.

“I fully believe the chances of them contacting COVID through collecting candy is very slim. We as parents and adults just need to be smart about it,” he wrote in an email to CTVNews.ca.

His kids will wear proper masks, even if they aren’t part of their costume, and use sanitizer throughout the night. He says candy-givers should be sitting outside to prevent ringing of bells or groups gathering on steps or porches.

All candy wrappers will be wiped when the kids get home.

Paige Cody of Ottawa is taking a creative stay-at-home approach. The mother of two youngsters plans to throw Easter and Halloween together for a Harry Potter-themed candy hunt.

She’s told her daughter, 8, and son, 3, that they won’t be trick-or-treating but they will dress up as the wizarding characters, wave their wands, and fill their cauldrons with candy. She plans to hide baking ingredients, too, and to follow the sugary scavenger hunt with family time in the kitchen.

If friends in their bubble want to join, Cody will take it to the backyard.

Cody, who is brand director and co-founder of Ottawa-based rental platform Ruckify, says a video she posted about her idea got plenty of rave reviews.

“One family even said they are going to do a hunt with a different theme in each room of their house,” she told CTVNews.ca.

Cody’s mission is to save Halloween because she’s concerned many people won’t feel safe having hordes of kids at the doorsteps or bringing home candy from strangers. That’s leaving some parents stressed about having to find alternatives to Halloween, she says.

But she does expect many families will embrace decorating this year to make the most of a spread-apart Halloween.

“I think we’ll see homes and even streets going all out with décor that people can walk around to see or drive through to look at.”

And that’s exactly what Sharon Lui and her family plan to do. 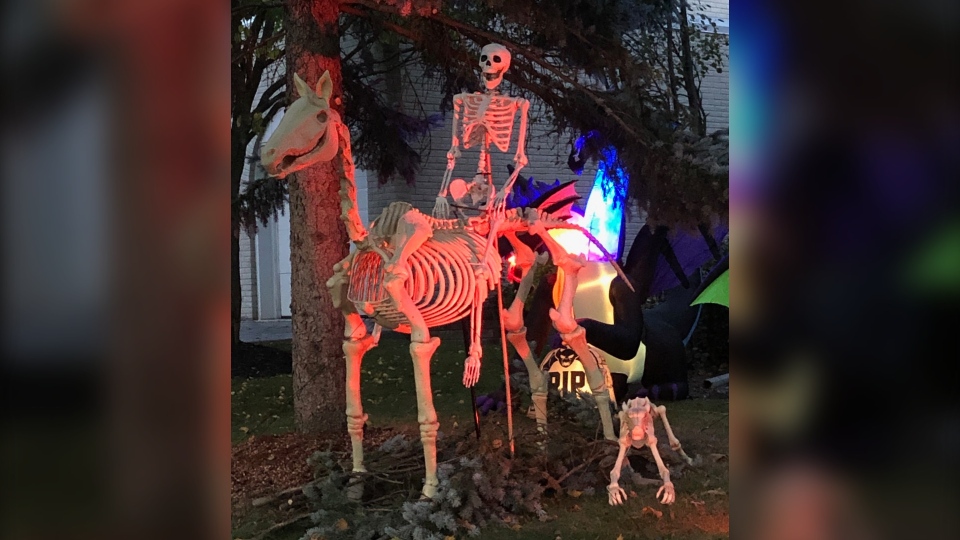 A pandemic is no match for their all-out-for-Halloween approach. In fact, 2020 is going to be bigger than ever at their Thornhill, Ont. home, Lui told CTVNews.ca.

The mom of three starts scouring for deals in August, admitting that she has a “go big or go home” attitude when it comes to yard decorations, which include a skeleton horse and rider, inflatable dragons, and giant pumpkins grown by Lui’s husband Tim Smith.

“For me, Halloween isn’t about trick-or-treating at all,” she said. It’s about creating a fun spectacle where construction workers take selfies and neighbours gather.

“It’s so much fun. I love being that house.”

Last year’s nearly 110-kilogram gourd won second place in the Markham Fair and then became a giant eyeball in the family’s display. This year’s version, on track for 135 kilograms, won’t win any ribbons because the Markham Fair has been cancelled.

Fairs and trick-or-treating can be shelved for safety, says Lui, but Halloween can never be cancelled.

“We all need something to look forward to,” she told CTVNews.ca before vowing she was heading off to find some new Halloween additions for her yard. 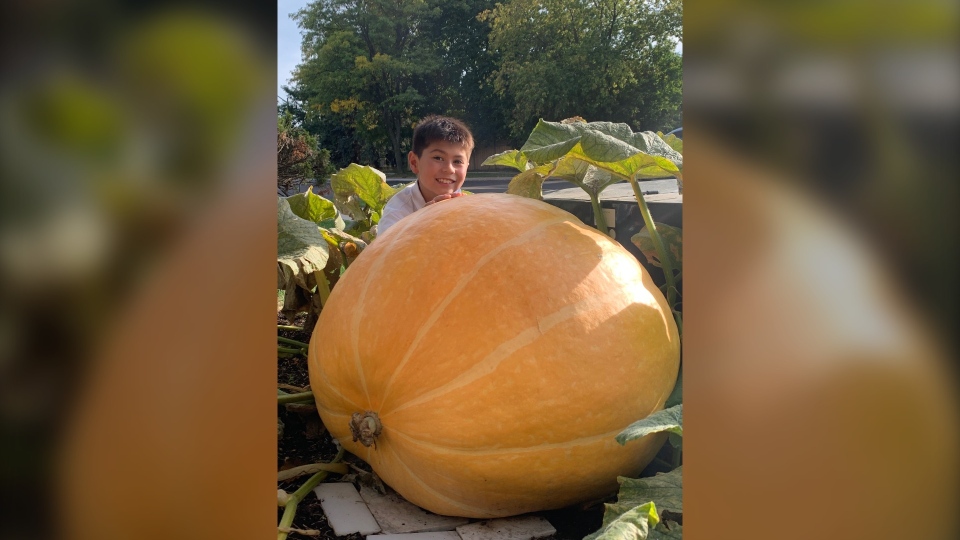 THE UPSIDE OF FEAR

Halloween has lots of fans.

A full 44 per cent of Canadians said Halloween is their favourite holiday, according to a 2018 Value Village survey, while a Retail Me Not report found that the average Canadian spends between $100 and $200 on Halloween.

It turns out it’s not just about the thrills and chills, being scared and living through it is healthy, says sociologist Margee Kerr, who studies fear.

So Halloween during a pandemic is a fascinating time for her.

“Things are so uncertain and feel so out of control,” she told CTVNews.ca. “But this a real threat, not a scary monster. When we get through this, there could be this widespread feeling of ‘Hey, I’ve experienced fear on my own terms.’”

Her research shows that people feel a sort of high after doing something scary, along with long-lasting boosts to confidence and self-awareness, she says.

“Fear is a great reminder of what we can do,” Kerr, a part-time faculty member at the University of Pittsburgh who lives in Denver, told CTVNews.ca.

Trick-or-treating has been caught up in societal fears before, says Kerr, who grew up in the ’80s, when “stranger danger” and tales of razor blades in candy were rampant. But the quintessential tradition and the occasion itself has survived, Kerr says, because it’s all about the emotional appeal of pretending.

“You get to feel like a superhero or that you conquered the zombie horde or survived the apocalypse.”

She suggests embracing a pandemic Halloween full force by incorporating masks into costumes and making hand sanitizer pose as a magical potion or monster repellant.

She and her wife, who manages a haunted attraction in Denver, hosted a physically distanced Quarantine-ween event March 31, decorating their house, letting fog machines go wild, and showing spooky movies in their front yard.

In times of anxiety, holding on to traditions can provide comfort and hope, so Kerr hopes people will find ways to celebrate Halloween in a way that feels safe.

That may mean trying something new this year.

Michelle James’ eight-year-old daughter is a big fan of Halloween and broaches the subject practically year round. But even she understands it may not happen as usual this year, says James, who lives in Toronto.

“We live in a pretty tight neighbourhood, so we’ve all said we’ll pool together to do something fun at someone’s house.”

Her daughter may be somewhat disappointed, but James says she and her friends are keeping track of all the birthdays and occasions they’ve missed out on this year and plan to cash in when the pandemic is over.

“They’re planning a huge sleepover for all their birthdays put together.”

In some parts of Canada, amusements parks remain closed and some haunted attractions and pumpkin patches may also be shuttered or offer fewer activities. Disney theme parks and Knott’s Berry Farm in the United States have cancelled their Halloween events and Canada’s Wonderland, which is usually a very scary place come October, has not been allowed to reopen.

Forbidden Vancouver offers walking tours with a limit of 12 practising physical distancing and “zero physical contact between guests of different parties and between the guide and guests.”

The Haunted Walk in Toronto has launched a series of “bubble tours,” limiting groups of 12 from no more than three social circles, along with a Save Halloween Project with merchandise and a fundraising campaign that will fund a series of “virtual haunted campfires” led by spooky storytellers from around the world.

The Halifax Ghost Walk, billed to be the oldest in North America, is starting up this weekend.

HALLOWEEN WILL GO ON 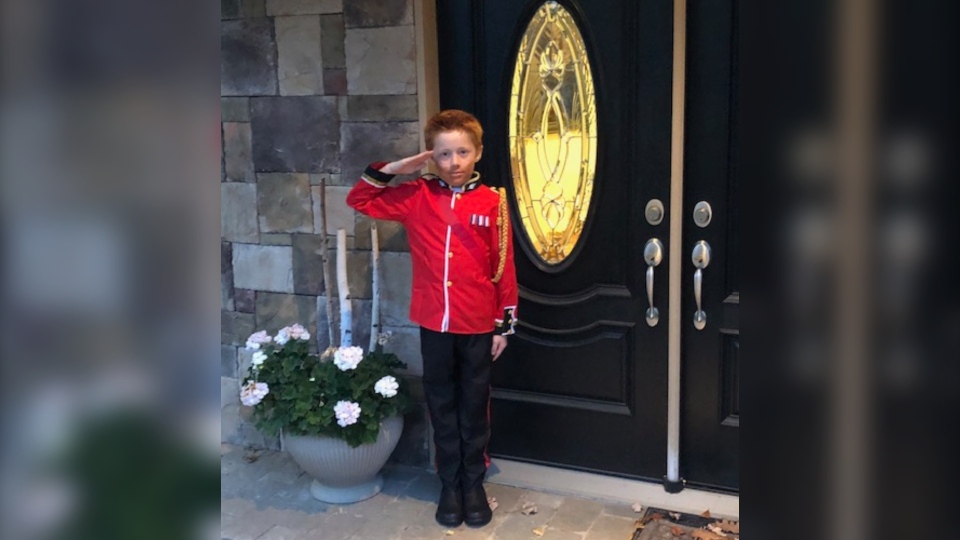 Jacob Notaro, 10, who capitalized on his red hair by dressing up as Prince Harry last year, has already decided he’s going to be comic book legend Archie Andrews this year.

But the King City, Ont. soon-to-be Grade 5 student is reconciled with the reality that trick-or-treating may not happen this year, says his mom Joanne Henry.

But there will still be Halloween, she says. Her neighbourhood goes all out with almost a “festival atmosphere” and she expects that will be even more true in 2020. Maybe residents will sit outside and watch a parade of costumes or perhaps treats can be handled out without contact in individual baggies.

“We won’t be bobbing for apples this year, but we’ll do something,” she said. “Children’s lives have been crazy and it’s been tough on them. To take away Halloween? I can’t imagine.”

But nearly three-quarters of respondents to a poll in the U.S. said they had no plans to take their kids door-to-door this year.

A municipality in California has already suggested that residents find alternatives to trick-or-treating.

While the state of the pandemic is much more dire south of the border, people who weighed in on the fate of Halloween on CTV News’ social media feeds showed the depth of the debate here. Some said they wouldn’t be comfortable seeing kids go out for Halloween this year.

“There can’t possibly be any trick or treating. Touching doorbells, strangers handling the candy that’s put in your child’s bag etc etc. No way,” said one Twitter user.

And some said they wouldn’t want kids coming to their doors.

“I feel sorry for the kids but no way do we want any coming to our front door this year. We’re elderly and have pre-existing conditions. We’re still self-isolating and don’t want to undo all this.”

A few said they would wait to see the situation in October, while others urged that Halloween traditions could be done safely.

“One kid at a door at a time, physical distancing, masks. We can do this safely! A lot of us have been ordering take out, this is similar in terms of contact,” said a poster on Facebook.

Some offered suggestions, including staying in to eat candy and watching scary movies, or walking the neighbourhood to look at decorations. One respondent said they were planning to close all the doors in their house and have the kids knock at each for candy.

“Our yard will be more decorated than ever this year so people can still have fun even walking or driving by,” said another CTV News viewer. “We are trying to come up with a fun way to give out candy by a zip line from the top floor or long butterfly net. There is still a way of doing it if you want to take the time.”

A few approached the debate with humour: “I’m going to get a potato cannon and just shoot the candy at the kids at the end of my sidewalk.” 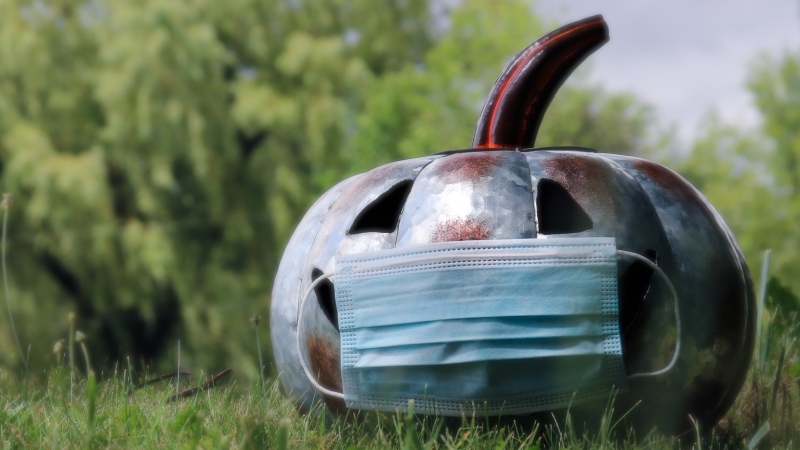