﻿As British Columbia faces a second wave of the coronavirus, youth in the province are speaking out about how they’re being affected by the pandemic.

It comes as new modelling shows that the recent surge in new COVID-19 cases is being driven largely by young adults, aged 20-39 years old. 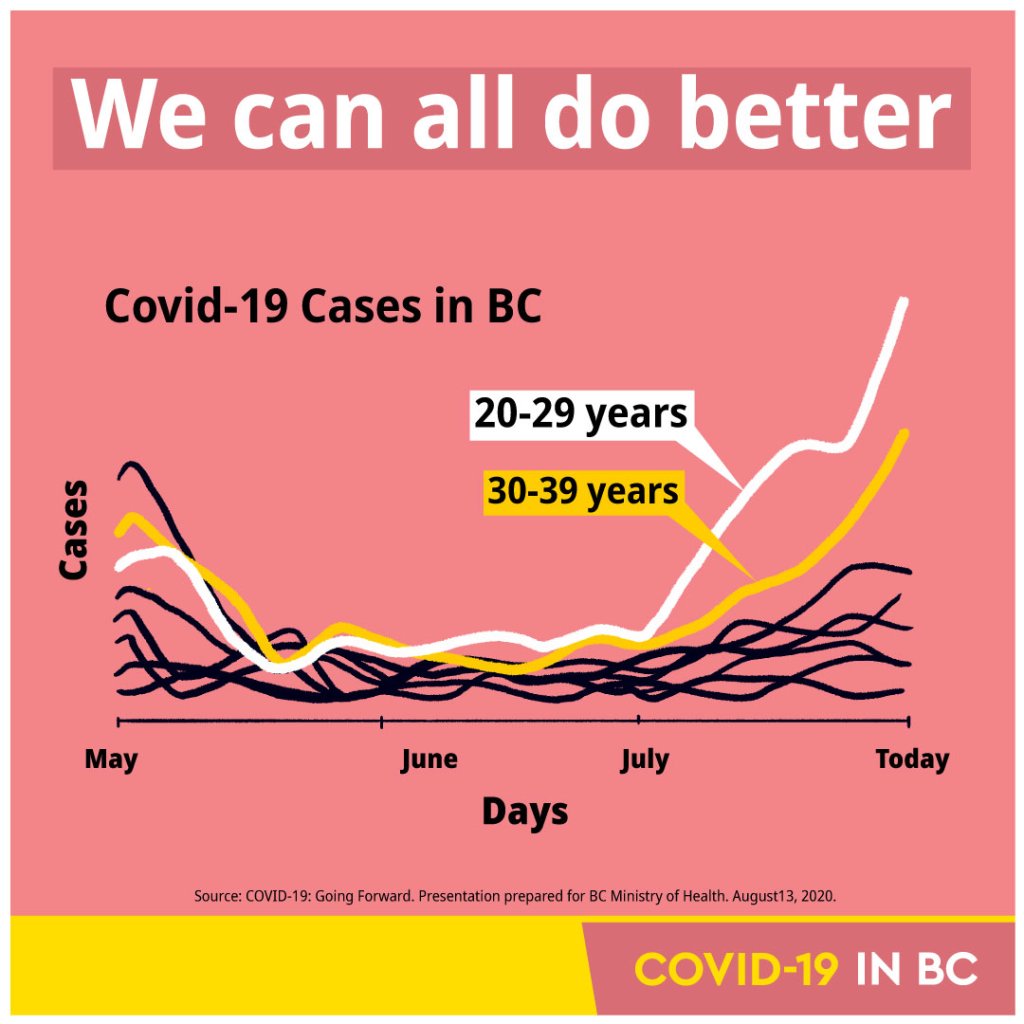 The issue has prompted the province to redouble its efforts to communicate with youth, including recruiting social media influencers, and calling on celebrities to add their voices to the campaign.

CKNW Radio’s Lynda Steele Show spoke to some of B.C.’s youth, who say their voices aren’t being heard in the debate.

Olivia Barbieri of Surrey says youth are being bombarded with “exhausting” messages about staying safe during the pandemic.

The 20-year-old understands the concern, but argues that older adults also need to recognize that her demographic is being uniquely impacted by the virus.

“There are some events in certain stages of life — like weddings, graduation, like having different study plans — that are very unique to these times of our lives,” she said.

“It’s really hard, especially as young people, to be like — okay, well our parents and everyone else have had these opportunities, so it’s hard to be like, okay, this isn’t happening for us.”

Barbieri, a third-year university student, was supposed to go to the Netherlands for a semester abroad this September. That has now been scrapped.

She’ll now be studying online instead.

But she says many of those cases don’t involve giving up once-in-a-lifetime opportunities.

“I’ve been struggling,” she said. “You know, I would be packing up, I would be getting on a plane.”

Barbieri says she understands that all age groups have had to make sacrifices during the pandemic.

Back to school fears

Burnaby’s Ervin Cadiz, 16, is slated to head back to school next month, and says he doesn’t want to go back unless he can do it online.

“It’s upsetting to be forced back into school when the government has told us to keep our bubbles and contacts small,” he said.

“I followed all the precautions and guidelines set by health care officials ever since quarantine happened. So why is it now that we’re being put in groups larger than 50?”

Cadiz said he’s worried he’ll be regularly exposed to large groups of people at school who may or may not have been following precautions, and will have to rely on transit daily to get there.

He worries he could come in contact with the virus, and bring it home to his family.

“It’s like we’re being given this ultimatum. Risk getting your parents sick, risk getting your relatives sick, or don’t go to school and get the education that you need,” he said.

Tanysha Klassen, 24, of New Westminster says the province’s youth aren’t getting a consistent message from officials.

Klassen says she’s been working from home during the pandemic, wearing a mask and limiting her trips out for essentials, such as groceries.

But she says the way the province has reopened has suggested to young people that going out is fine.

“Things like restaurants and bars and nightclubs have been given the go-ahead to open up by the provincial health officer,” she said.

“Then we’re getting these announcements every day with the cases going up, saying that these are often coming from bars and nightclubs. And then we hear the media blaming it on young people because young people are the ones that go to these places.”

Klassen said it’s unfair to pin those new cases on youth when it’s the responsibility of bar operators to ensure safety protocols are in place and being followed.

She said if those establishments aren’t doing enough, it’s up to the province to crack down on them for breaking the rules.

“It seems like young people are just following the rules,” she said. “If people shouldn’t be going to bars and nightclubs, then they shouldn’t be open.”

Shumail Javed, a 29-year-old from Burnaby, says the province should have taken a clearer and tougher line in its messaging from Day 1.

He says he’s seen crowding at “party places” such as the beach and few people wearing masks.

“Maybe all people from different segments of society should have come together, form a digital campaign that could have helped people understand this,” he said.

“Make sure that it was simple, strictly like wearing face masks. Or enforcing fines in the party places like Kelowna or Tofino.”

Javed said the messaging around masks, in particular, has been too casual, leaving many people to feel like the pandemic had eased back to business as usual.

He said the province has also failed to open up more outdoor spaces and activities where people could congregate and have fun safely, prompting people to head back to bars and clubs.