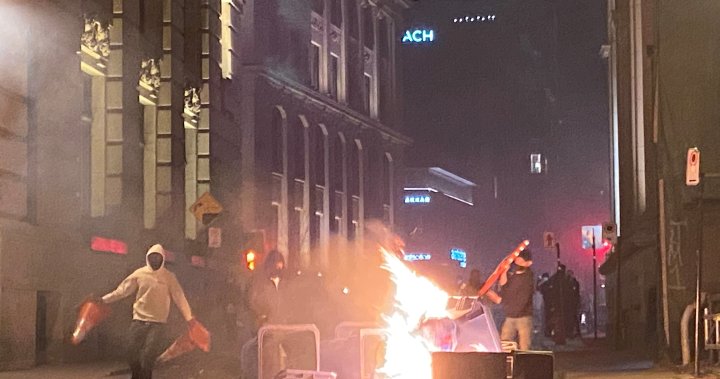 Montreal police arrested seven people and doled out more than 100 tickets to people flouting COVID-19 public health guidelines after a protest against an earlier curfew devolved into vandalism and violence.

Hundreds gathered in the city’s Old Port on Sunday night to demonstrate against the Quebec government’s decision to roll back curfew to 8 p.m. in Montreal and Laval amid the rise in infections in the province.

“We have the right to express our disagreement, but we must do so with the greatest respect for the health rules in force,” she wrote on social media Monday morning.

Hundreds of people breaking first night of 8 p.m. curfew in Old Montreal. « Freedom for the young!» they chant. pic.twitter.com/zdqAjb9MTz

The protest began relatively calm, with a mostly young crowd dancing to music from loudspeakers while lighting fireworks and chanting. However, as some demonstrators began getting destructive, they were met with tear gas from police in a bid to control the crowd.

As a result, merchants are assessing damages to their local businesses Monday morning.

Montreal Mayor Valérie Plante says city crews are at the scene to clean up the mess left behind from the protest.

“I deplore the destruction of businesses,” she said. “I invite Montrealers to visit the area and encourage the merchants of Old Montreal.”

The protest came on the heels of Premier François Legault announcing that restrictions are being tightened in Montreal and Laval with the reinstatement of the 8 p.m. curfew as of Sunday. It will be maintained until further notice.

The curfew was first put in place for Montreal on Jan. 9 and was originally set to remain until Feb. 8. The Quebec government then continuously extended it — citing that it was helping decrease the number of daily reported COVID-19 infections.

Officials then extended it from 8 p.m. to 9:30 p.m. in mid-March, and last Thursday said they were again rolling it back by 90 minutes.

Legault said the measure is preventive amid rising COVID-19 infections across the province, which hit 1,535 on Sunday. Health officials say the presence of more contagious virus variants make Montreal and Laval more vulnerable to outbreaks due to their high population and density.