With the coronavirus pandemic spiraling out of control in India and other developing regions, the United States this week committed to sharing 60 million doses of the AstraZeneca vaccine with other countries.

But that’s a drop in the bucket.

The U.S. has bought or contracted to buy more than 1 billion doses of coronavirus vaccines. That’s enough to vaccinate the U.S. population at least twice, with plenty left over.

Medical ethicists told CNN the country has a moral duty to share those doses with other countries. That’s especially true, they said, now that the pandemic is relatively under control in the U.S. while countries like India have been overwhelmed by the virus.

“I do believe that the U.S. is obligated to share vaccines with other countries,” said Keisha Ray, an assistant professor and bioethicist at UTHealth McGovern Medical School in Houston, “especially those countries we might consider poorer countries or what we call underdeveloped countries.”

Arthur Caplan, director of the Division of Medical Ethics at NYU’s Grossman School of Medicine, agreed. He said the U.S. was “ethically obligated” to share vaccines, pointing to the “horrific death toll and hospitalization tsunami that’s taking place in many countries.”

IT’S A QUESTION OF WHEN – NOT IF

From an ethical perspective, everyone should have access to protection from COVID-19, Kathy Kinlaw, associate director for Emory University’s Center for Ethics, told CNN.

She said many countries lack vaccine access because of the “diminished purchasing power for healthcare in general, but also for COVID-19 treatments and vaccines.”

“I think the United States is definitely in a position where we should be sharing, absolutely,” she said. “It’s a matter of timing — I think that’s one real issue here.”

The U.S. is not simply obligated to share vaccines by virtue of its resources, Ray said. Wealthier countries like the U.S. have historically benefited by hindering other countries, she said, whether through government relations or colonialism.

“We’ve gone to other poorer countries, taken their resources, and we’ve built our wealth on the backs of their resources,” she said. “And we’ve left them in a position that now they can’t care for themselves.”

All three agreed it was right for the U.S. to control its virus outbreaks before sharing vaccines. The pandemic is still an issue in the U.S., Ray said, but conditions have improved greatly.

“When you look at the U.S. and global distribution of vaccines, you have to first ask, is the U.S. in a position to help other people? That means it won’t be of detriment to its own people, in this case Americans,” she said. “So do we have the resources to share with other countries who are really struggling with the Covid pandemic? And simply put, right now, the answer is yes.”

Caplan likened it to the rule for airplane oxygen masks that flight attendants describe prior to takeoff: “Put your own mask on before you assist others.”

“You need to stabilize your own nation before you assist others,” he said. “And I think we’re there. I think we’re getting there now.”

One factor in deciding to release extra vaccines is the issue of supply and demand — specifically, that the former will soon outstrip the latter in the U.S., Kinlaw said. And that could mean it’s time to start shipping spare doses overseas, she said.

A recent report by the Kaiser Family Foundation said the country as a whole will “likely reach a tipping point on vaccine enthusiasm in the next 2 to 4 weeks.”

“Once this happens,” the report said, “efforts to encourage vaccination will become much harder, presenting a challenge to reaching the levels of herd immunity that are expected to be needed.”

One official in Ohio’s Mercer County told CNN this month that officials are struggling to fill vaccine appointments. And earlier this week, Georgia officials announced they would close the state’s eight remaining mass vaccination sites on May 21.

The U.S. needs to continue to address vaccine hesitancy at home and be responsive to peoples’ concerns, Kinlaw said. “But certainly there could be a point where there are people who will not take the vaccine and we have extra vaccine in this country, in which case it should be used and shared.”

Data from the U.S. Centers for Disease Control and Prevention shows that 30% of the U.S. population is fully vaccinated. Experts like Dr. Anthony Fauci, director of the National Institute of Allergy and Infectious Diseases, have estimated the U.S. needs between 70% and 85% of the country to be immune — either through vaccination or prior infection — to reach herd immunity.

But even without reaching that crucial threshold, the U.S. has enough vaccines to share with other countries, experts said.

The U.S. could have an estimated 300 million excess doses by the end of July, according to a recent Duke University report.

“The world’s wealthiest nations have locked up much of the near-term supply,” wrote Dr. Krishna Udayakumar and Dr. Mark McClellan, health experts at Duke. “At the current rate vaccines are being administered, 92 of the world’s poorest countries won’t vaccinate 60% of their populations until 2023 or later.”

Ray told CNN the main issue in the U.S. is not one of supply. It’s vaccine access for poor communities, rural communities and communities of color — particularly those that are Black and Latino — and lingering hesitancy, largely among White and conservative populations.

“That is an education, a public outreach and an access issue,” she said. “We have other hurdles that are not supply hurdles. So we do have the supply to help other countries.”

THERE COULD BE BENEFITS

It’s not just the right thing to do.

The U.S. and the world stand to benefit, especially if it wants to prevent further spread of the coronavirus and the emergence of new variants, the ethicists said.

“If you don’t get these hotspots under control outside the U.S., they’re going to come back, likely with new, dangerous strains that may undermine our vaccines,” Caplan said. “It’s both prudent to do it and ethical to do it.”

Kinlaw also emphasized the importance of herd immunity not only in the U.S., but globally.

“Epidemiologically, we should be working to suppress the virus and to decrease transmission and decrease the continue evolution of the virus and the variants,” she said. “That is going to be beneficial to every single person.”

“Beyond just doing what is just, we can look at it practically,” said Ray, “and we can’t have a country as large as India and as important to the global economy as India not producing the goods that we have come to rely on them for.”

There are plenty of questions that will also have to be addressed when the U.S. shares vaccines, Caplan said, like, “Who goes first? What do you do within the country? Is it too late and better to send medicine rather than vaccine?”

He pointed to the need to ensure a country that receives doses from the U.S. is distributing them fairly and to vulnerable individuals.

“One of the ethical challenges is, are we going to insist on fair distribution within those countries? Or are we just going to give them vaccine and let them give it to the military and elite?” he said.

“It sounds nice to say we’re going to aid others, but its simplistic, because some governments are corrupt,” he said. “Some governments have no distribution plan other than to give it first to their own leaders, rather than to those in need.” 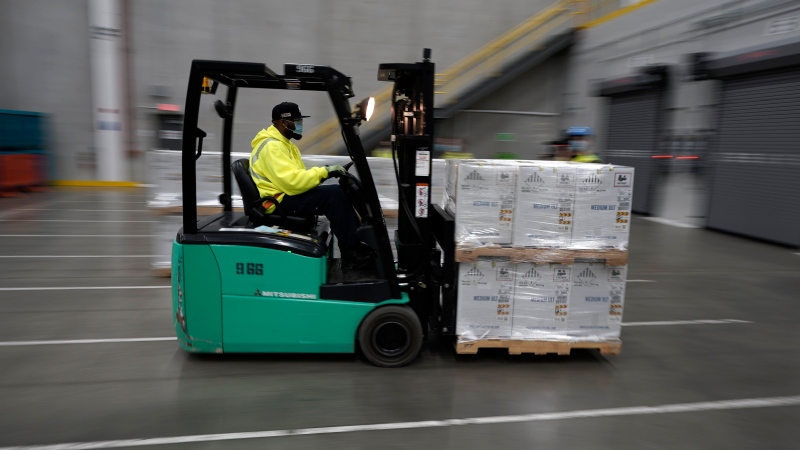