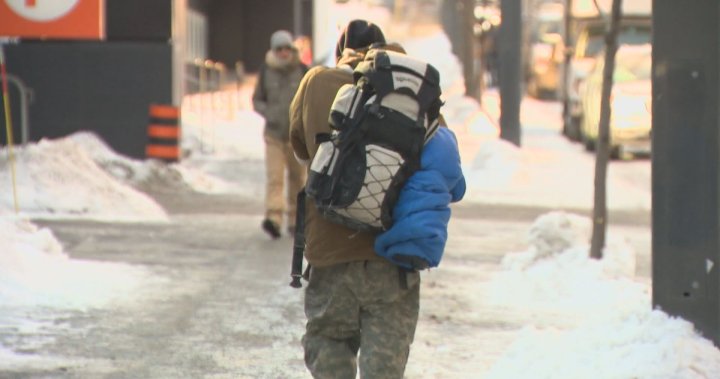 Quebec Premier François Legault reiterated Thursday that he would not be modifying curfew rules, claiming that his critics calling for amnesty for the homeless are sowing division in the province.

Legault made the comment during a press conference on the province’s coronavirus response.

Calls to exempt people experiencing homelessness from the curfew have been growing in the wake of the death Raphael Napa André — a homeless Innu man.

The 51-year-old was found frozen inside a portable toilet early Sunday morning in Montreal.

Legault said that like everyone, he was deeply moved by the incident.

“We’re all humans and it hurts to see someone die like that in our society,” he said.

Earlier in the week, Legault was criticized for saying that he wouldn’t grant an exemption out of fear that people would pretend to be homeless to get out of curfew.

“A law that imposes a curfew and forces someone to make a decision to take refuge in a chemical toilet, obviously, that goes to the heart of the debate,” Miller told reporters on Wednesday.

“We must show more humanity, in my opinion.”

Legault warned against drawing a link between André’s death and curfew rules.

“We have to be very careful about Mr. André — there’s an inquiry about what happened,” Legault said, “so before trying to say that some people will die because of our rules, I think it’s not fair to say.”

Legault defended the curfew, implemented in early January to curb the spread of COVID-19, saying it was working.

“Numbers show that we’ve been going in the right direction since 10 days,” he said, referring to daily caseloads of COVID-19 which have been decreasing.

“This means that the curfew is paying off. There are less gatherings after 8 p.m., less contacts and less contagion.”

He also commended the work of police in enforcing the provincewide curfew.

Under the rules, people can be fined between $1,000 and $6,000 if they are outside their homes without a valid reason.

Legault said police officers are familiar with the realities of people experiencing homelessness and that officers aren’t going out of their way to ticket them.

“Their responsibility is to help them and guide them to a shelter,” Legault said. “But we also need the tools to enforce the curfew that is saving lives. We’re trying to find a balance for the good of all.”

Legault also said the province was working with the city of Montreal to address the needs of the homeless population.

Earlier in the day, Quebec Junior Health Minister Lionel Carmant, Mayor Valérie Plante, the Red Cross and Chantal Rouleau, the minister responsible for Montreal, announced a soccer stadium in the city would be transformed to accommodate homeless people who have tested positive for COVID-19 but do not require hospital care.

The site will have 150 beds, which will be split into individual units that will comply with public health guidelines to curb the spread of the novel coronavirus. Those beds will gradually become available in the coming days.

Quebec’s Health and Social Services Ministry says the project aims to meet the “increased isolation needs” for those who live on the street and have contracted COVID-19. It is also meant to complement the service offered for the homeless population at the old Royal Victoria Hospital.

The places are in addition to those announced Wednesday at the Pierre-Charbonneau Centre in the city’s east end.

The two initiatives mean there will be up to 250 new beds to accommodate homeless Montrealers.

“I want to make sure that no one has to spend the night outside in the weeks to come in the harsh of winter,” Carmant said in a statement.