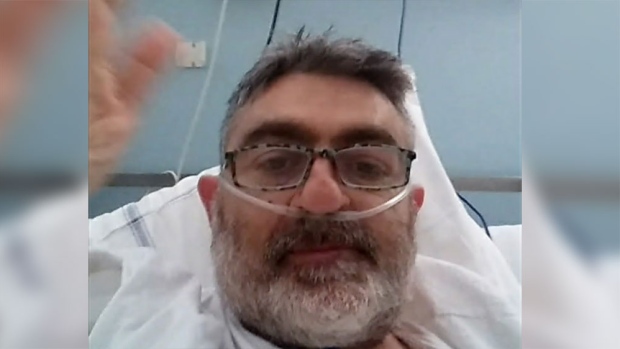 TORONTO — There are glimmers of hope among the horror stories coming out of the COVID-19 pandemic, including one from an Italian man who contracted the disease.

Fabio Baroncini was “fit as a fiddle” until March 8, according to his friend Aldo Magnani. That’s when he says Baroncini came down with a fever.

Within two days, the 55-year-old tested positive for the disease. Four days later he was hospitalized for breathing problems.

Within a day, he improved and was discharged, but was readmitted the next week as he worsened. Baroncini ended up in intensive care on “passive” ventilation, which consists of a bubble like oxygen machine called: “Il Casco.”

“We feared for his life,” said Magnani.

Baroncini is an ambulance driver in the city of Sassuolo in the Emilia Romagna region, a hotspot for COVID-19 in northern Italy. According to Magnani, who wrote to CTV News, Baroncini had rescued a person from a car crash, who later tested positive for COVID-19.

Throughout his journey, Baroncini took selfies and his friends took pictures on the days he was unconscious.

After a harrowing three week medical ordeal, Baroncini had recovered enough to return home with what is described by friends as a full recovery.

His friends made a hopeful video, which they call a “celebration” clip, in a bid to convey the emotion and toll of the disease on Baroncini’s face and the smile as he returned to better health.