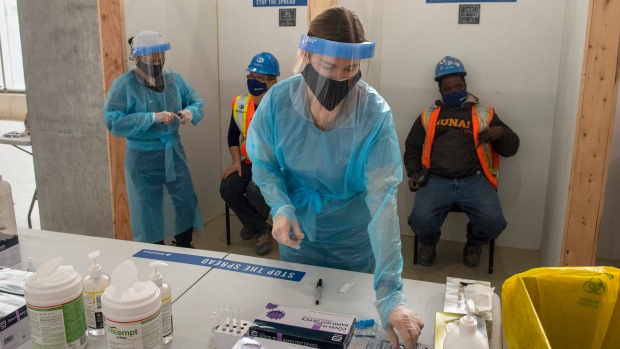 HALIFAX — Once a week, Akin Guler goes to a meeting room in his office where one of his co-workers — trained to administer rapid COVID-19 tests — inserts a small swab into his nostril.

Within 15 minutes he has the result: One stripe is a negative result, two stripes positive.

He adds: “I feel like this is a social responsibility. It’s not only for me, it’s for all of us.”

As workers return to office buildings and job sites across the country, some are being offered rapid COVID-19 tests at work.

The workplace testing program, led by Creative Destruction Lab’s rapid screening consortium, is being rolled out across Canada in an effort to identify asymptomatic infections.

Those behind the project say it will help limit workplace outbreaks and possibly prevent future province-wide lockdowns, keeping the economy and Canada’s corporate world open.

“But until there’s herd immunity from vaccines, if the virus starts to spread and we don’t know who has it, we have to go into lockdown,” he says. “With widespread testing and tracing solutions, we can be more targeted.”

Some of Canada’s largest employers like Air Canada, Rogers Communications Inc. and Loblaw Companies Ltd. joined a group piloting rapid COVID-19 testing earlier this year. The program is now being extended across the country, with very good uptake so far, Larsen said.

But in Nova Scotia, the uptake has been “extraordinary,” he said.

So far, 275 workplaces with more than 50,000 employees have agreed to participate — nearly 10 per cent of Nova Scotia’s workforce — and another 400 employers are registered for the program. Some have signed up through CDL, while others have worked directly with the province.

The widespread workplace uptake in Nova Scotia reflects the province’s early adoption of rapid COVID-19 tests. While some provinces have been slower to use the rapid testing kits provided by the federal government, Nova Scotia began using them at pop-up testing sites last November.

Since then, the province has administered about 350,000 rapid tests, said Heather Fairbairn, a spokeswoman for the provincial Health Department.

While the quick diagnostic tests have faced scrutiny over accuracy, Nova Scotia has identified hundreds of asymptomatic cases using rapid tests: There have been 378 confirmed positive cases identified at pop-up testing sites since April 1, Fairbairn said.

Now the province is partnering with CDL, local chambers of commerce and seven Regional Enterprise Networks to offer workplace asymptomatic testing. Companies with more than 50 employees can sign up directly through the province, while those that are smaller work with CDL.

“Nova Scotia has embraced community rapid testing, which has led to this positive uptake that we’re seeing,” he said. “If we normalize it now in the workplace, we can keep the virus at bay and minimize the chances of having to lock down.”

Larsen adds: “I think people have a sense that we’re in this together and these tools will make a difference.”

For Trevor Hennigar, the chief operations officer at Rimot, offering rapid tests in the office is a way to help employees feel safe returning to in-person work. I mean

“This is a really effective way to help employees feel comfortable and confident about coming back into the workplace,” he said. “We also just want to do our part to stop the spread of this thing.”

While Nova Scotians already have access to both drop-in rapid COVID-19 tests and pre-booked PCR (or polymerase chain reaction) tests, offering tests directly in the workplace helps eliminate barriers that might prevent workers from getting tested regularly on their own, Hennigar said.

“We want it to just be part of the work day,” he said. “It’s not a dedicated trip or an extra stop. Making it convenient and accessible is really key.”

While Rimot has made the rapid screening voluntary, Hennigar said it’s strongly encouraged and he expects that most if not all those returning to the office will participate.

Still, the rapid tests are just one of the safety measures Rimot is taking to curb COVID-19, he said.

The company also does a daily screening with workers using a kiosk it developed at the outset of the pandemic. It’s equipped with a contactless screen and an automated questionnaire users answer using a foot pedal. It also has a thermal camera to do temperature checks and can detect face mask compliance.

“The rapid tests are just one of the tools were using to keep employees safe,” Hennigar said, adding that given the significant cost of shutting down, the rapid tests and health screening measures not only keep people safe but also save money.

The rapid test kits used in the workplace screening program are paid for by the federal government and supplied to employers by the province, Fairbairn said.

The province also provides training and PPE, while employers agree to take on the cost of running the program, such as related human resource expenses and other safety measures.

The rapid antigen tests being used in Nova Scotia are the Abbott PanBio test, a lateral flow test, with a shallow nasal swab, she added in an email.

“It is a simple test that could be most closely compared to an at-home pregnancy test. The results appear as one line (negative) or two lines (positive) on the test cartridge.”

This report by The Canadian Press was first published June 23, 2021. 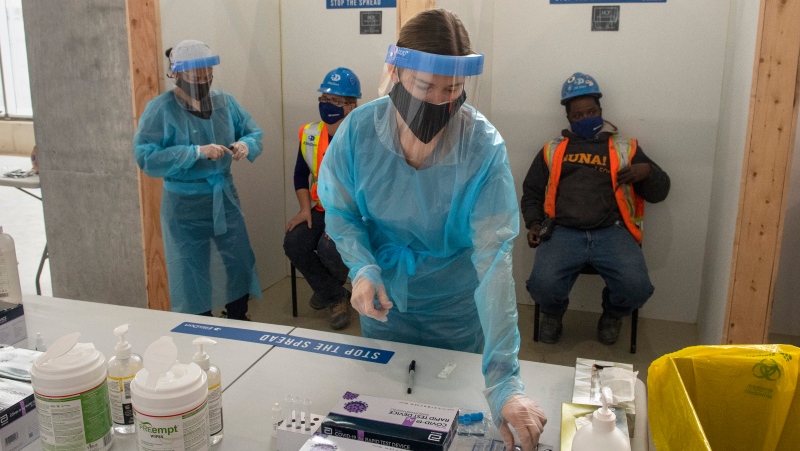