More Canadians say they are likely to get the flu shot this year amid the novel coronavirus pandemic than they were last year, a new survey has found.

The survey conducted by Pollara for the Canadian Pharmacists Association polled 1,912 Canadian adults between May 21 and May 25 and found 57 per cent of respondents said they would receive the flu shot this year. 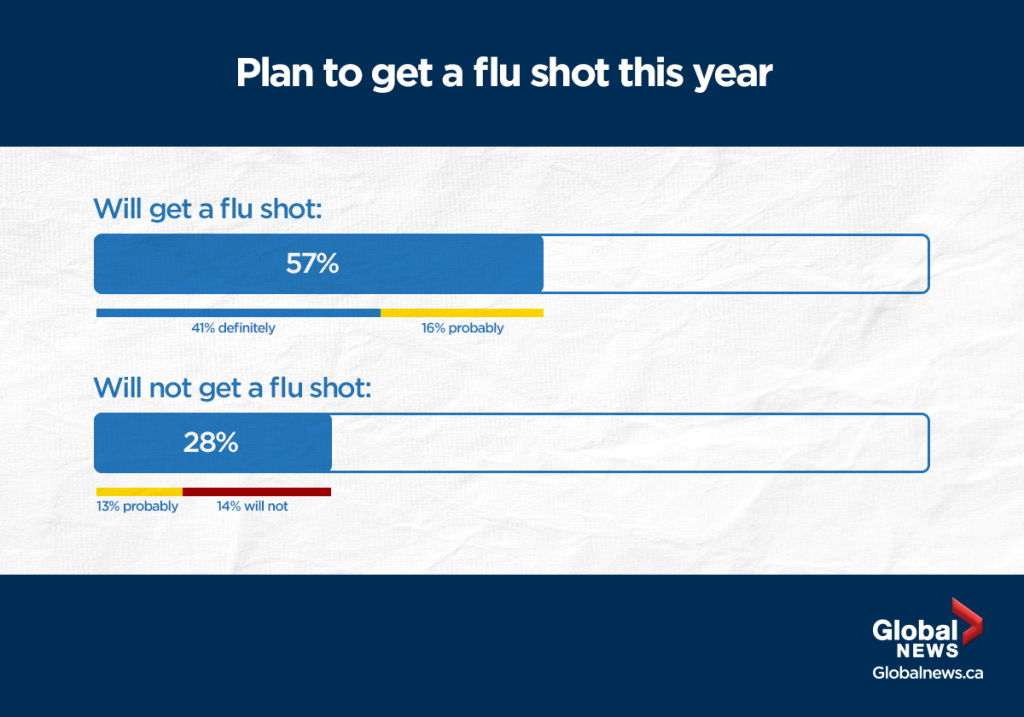 This marks a significant increase from the 45 per cent of Canadians who claimed they received the flu shot last year.

What’s more, according to the survey, 26 per cent of those who were not vaccinated last year said they would “definitely” or “probably” get a flu shot this year.

Those respondents said they are more likely to receive a flu vaccine because of the COVID-19 pandemic.

Shelita Dattani, director of practice development and knowledge translation at the Canadian Pharmacists Association, said while Canadians are likely being influenced by the COVID-19 pandemic, they are also keeping a close eye on what is happening in the Southern Hemisphere which is now at the tail end of its flu season.

Read more: Coronavirus lockdowns might be delaying flu season in the southern hemisphere

“I think people are just concerned about being protected and immunized because of what we have experienced and we support that,” she said. “We think it’s great that people want to get their flu shot.“

When asked whether their decision to get a flu shot or not was influenced by the pandemic, one-third (34 per cent) of the survey’s respondents said they were more likely to get the vaccine because of COVID-19. 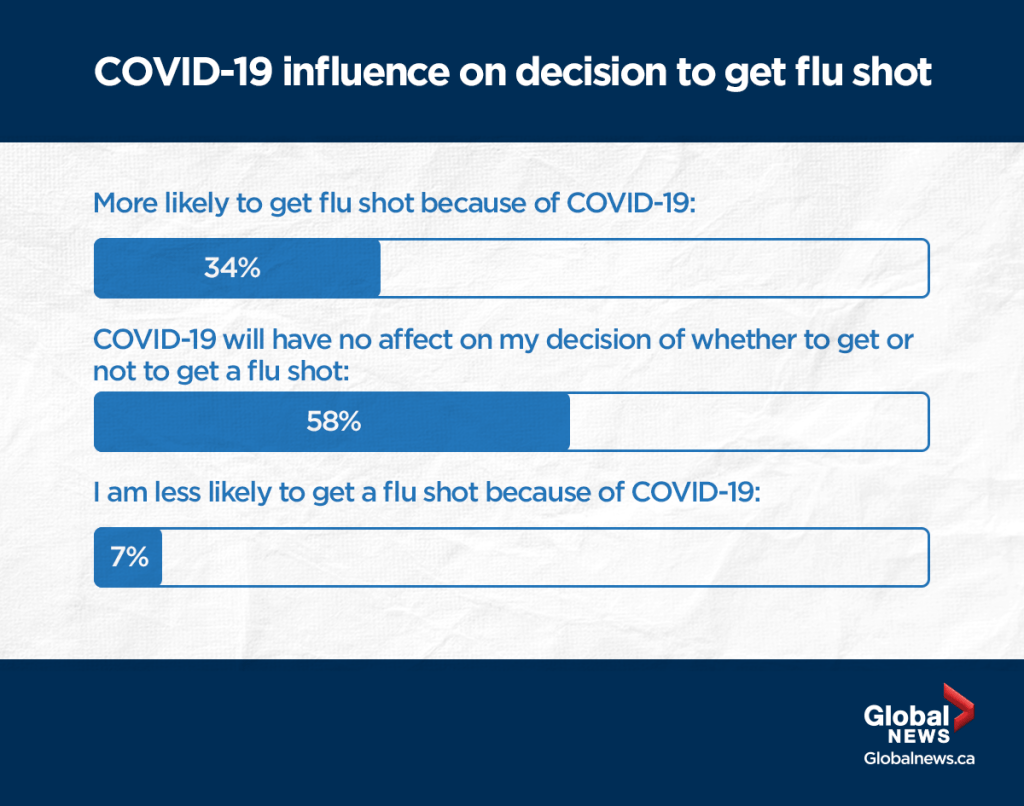 Dattani said the COVID-19 pandemic has “created a lot of uncertainty for people.”

“I think that COVID-19 is a direct influencer in terms of, you know, changing people’s minds about protecting themselves in any way they can with vaccination,” she said.

However, more than half (58 per cent) of Canadians said the COVID-19 outbreak will not affect their decision whether to get the flu shot.

Seven per cent said they are less likely to get the shot because of the pandemic.

According to the survey, a slim majority of Canadians (54 per cent) believe the flu shot does an effective job of preventing the flu.

However, 27 per cent of the survey’s respondents said the vaccine does not prevent the flu.

Six per cent said they believe the shot does more harm than good. Thirteen per cent of Canadians said they didn’t know or were unsure. 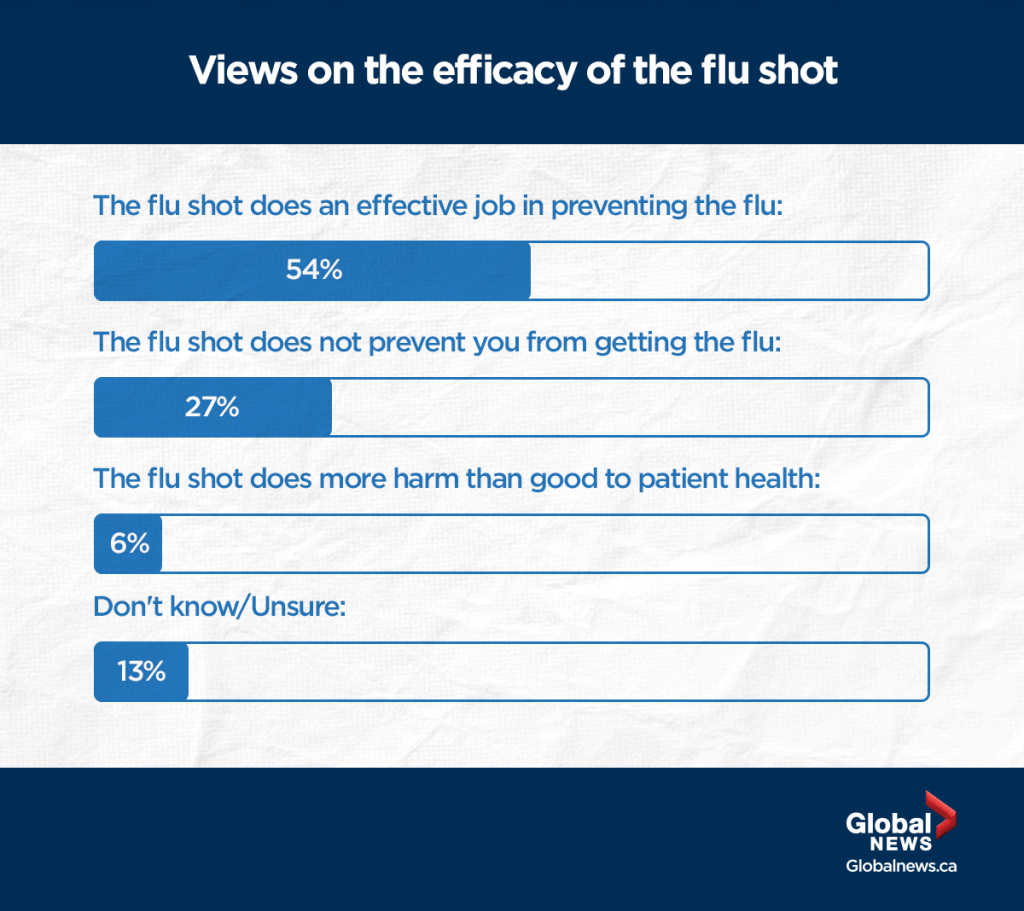 “Every year the (influenza) strains are a little bit different, but I think it’s definitely encouraging to see that people have some belief in the flu (shot) and that it’s more than 50 per cent of Canadians,” she said.

Dr. Timothy Sly, an epidemiologist and professor emeritus at Ryerson University’s School of Public Health, said he is “hopeful” that the survey’s findings could mean people may be more willing to get the COVID-19 vaccine if and when one is made available, but that it may be “too early to speculate.”

“Of course, we can hope, but in terms of people changing their behaviour on a more permanent basis, I think we might have to wait until we see the vaccine coming in,” he said.

Read more: World economy will recover faster if everyone can get coronavirus vaccine: WHO

Sly said it may take a year or more after the COVID-19 vaccine is released that people begin to trust it.

He pointed to vaccines for polio, saying many were tentative to accept them at first, but when they were found to be very effective, all vaccines began to “take off.”

“Vaccines were a favourable thing,” he explained, saying people began updating their vaccinations for the measles, the mumps, diphtheria and tetanus.

Sly said when it comes to a COVID-19 vaccine, he hopes that it will be seen to be effective right away.

“People might say ‘hey, you know this is another vaccine, but let’s get everything at this time, let’s not hesitate,’” he said.

Could a surge in demand create a shortage?

According to Dattani, Canadian health officials both federally and provincially are “preparing as much as they can” to meet the potential increase in demand for flu vaccines.

“People have put in sort of what they think they need, so their volumes are definitely up,” she said. “I think we know, again, from the countries that are already experiencing flu season that they have definitely seen an increased demand.”

Dattani pointed to Australia and Argentina, adding that both countries experienced a “real surge in demand” for flu shots.

“So I don’t think we expect anything different here,” she said.

What’s more, Dattani said there is also concern that there could be shortages of personal protective equipment (PPE) for those administering flu shots amid the COVID-19 pandemic.

“We’re working hard in our pharmacy community to definitely make sure that pharmacies have the right PPE to protect themselves and their staff,” she said. “We want people to come to their pharmacy to get their flu shot.”

METHODOLOGY: This poll was conducted online by Pollara Strategic Insights between May 21 and May 25, 2020. For this survey, a sample of 1,912 Canadians was interviewed. A probability sample of this size carries a margin of error of . ± 2.2%, 19 times out of 20. The margin of error is larger for sub-segments. Flexible demographic and regional quotas were employed to ensure reliable and comparable subsegment analysis and the data was weighted by current gender, age and region Census data to ensure the sample reflects the actual population of Canadian adults.