TORONTO — Ontario is expecting to receive 250,000 more doses of the AstraZeneca vaccine next week, a shipment that will be reserved for second shots as the province has suspended the use of the vaccine for first doses.

Officials confirmed on Wednesday morning that the province recently received information that Ontario will receive 254,500 more doses of the AstraZeneca vaccine during the week of May 17.

But those doses will be shelved for future use following the province’s announcement Tuesday that it has paused administering first doses of the AstraZeneca COVID-19 vaccine amid concerns over rare but serious blood clotting incidents.

The province’s Chief Medical Officer of Health Dr. David Williams said Tuesday that new data suggests the risk of vaccine-induced thrombotic thrombocytopenia (VITT) may be higher than initially thought – about one in 60,000 people rather than one in 125,000.

In Ontario, there have been eight cases of vaccine-induced blood clotting reported in those who received the AstraZeneca shot and while the condition remains extremely rare, it can be fatal.

Increased supply of the Pfizer vaccine in the province over the next couple of months means Ontario is in a position where it can suspend the use of AstraZeneca for now “out of an abundance of caution,” Williams said.

Declining case numbers in Ontario was also a factor in the decision, he added.

Ontario currently has about 50,000 doses of the AstraZeneca vaccine that have not been used.

Much of the remaining supply is set to expire at the end of May or early June and while the timeline for administering second doses of the AstraZeneca vaccine is not clear, the province is trying to work out a plan to use the leftover doses before they spoil.

Officials said data from the United Kingdom suggests that there is a significantly reduced risk of clots in those who receive their second dose of AstraZeneca and the province is still reviewing the data.

The province is also requesting that Canada’s National Advisory Committee on Immunization (NACI) provide direction on the interchangeability of COVID-19 vaccines, including using mRNA vaccines for second doses for those who received AstraZeneca as the first dose.

Officials say they intend to provide more guidance on second doses to those who received the AstraZeneca shot “shortly.”

Ontario hopes to begin vaccinating those aged 12-17 in June

During a briefing on Wednesday morning, the province also confirmed that it aims to begin vaccinating children between 12 and 17 starting in June but a detailed timeline was not provided.

Earlier this month, Health Canada approved the Pfizer COVID-19 vaccine for use in children as young as 12.

The province has previously said it aims to administer first doses to 65 per cent of adults in Ontario by the end of the month and on Wednesday, officials said they could actually exceed that target based on the current rollout.

According to the latest data, about 54 per cent of adults in hot spot postal codes have received their first shot 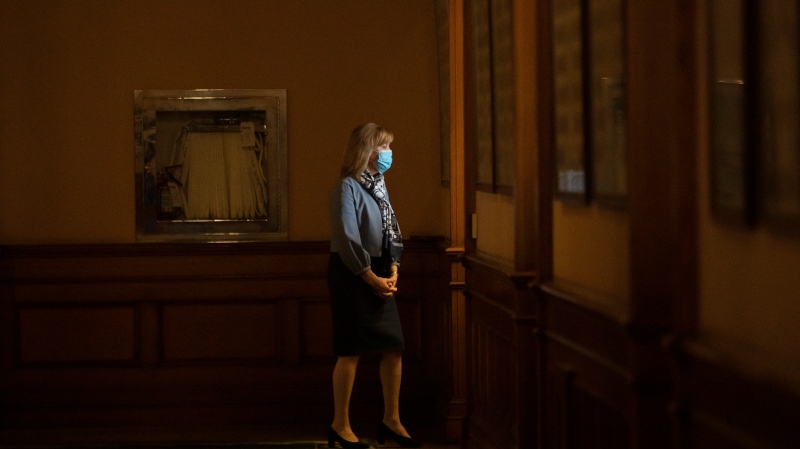