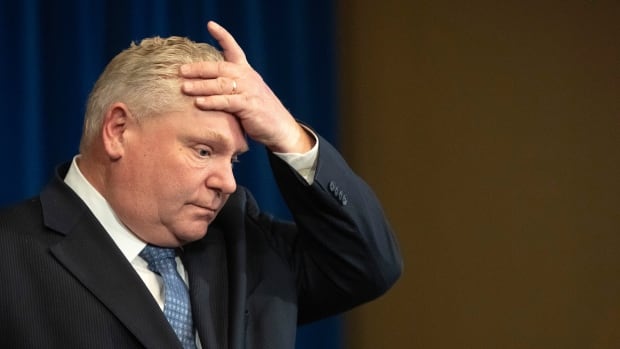 Provincial health experts are expected to provide a briefing Friday on modelling projections for the spread of COVID-19 in Ontario.

At a Thursday afternoon press conference, Premier Doug Ford promised health officials would explain “where this could go.” Ford said the people of the province “deserve to see” the same data about the pandemic that he sees.

“It’s going to be a real sobering discussion.”

Matthew Anderson, the head of Ontario Health, Adalsteinn Brown, dean of the University of Toronto’s public health department, and Dr. Peter Donnelly, who heads Public Health Ontario, will hold a news conference to explain the models. CBC news will stream that briefing live starting at around 12 p.m. E.T.

The number of available intensive care beds in certain parts of the Greater Toronto Area is rapidly shrinking as the number of COVID-19 patients surges higher, according to data obtained by CBC News.

Those hospitals are caring for 28 patients with confirmed cases of COVID-19 — double the number they were four days earlier.

The figures come from the latest available COVID-19 daily report from Critical Care Services Ontario, which was obtained by CBC News but has not been made public by the provincial health ministry. The report does not show a hospital-by-hospital breakdown of ICU bed occupancy rates.

The reports also show just 22 ICU beds available among the 163 critical care beds among the hospitals in the Central East Health Integration Network — including the Scarborough Health Network, Lakeridge Health, and Peterborough Regional.

The bulk of COVID-19 patients are cared for in what the province calls Level 3 critical care beds, the highest level of intensive care. In the Central East local health region, 89 per cent of those beds are full.

The reports also shows high demand for ventilators in the ICUs of the Central West Local Integrated Health Network, which includes the Etobicoke General and Brampton Civic hospitals of the William Osler Health System.

There are 33 ICU patients on ventilators in those hospitals, but their total official capacity of ICU beds with ventilators is just 26. The Ministry of Health has previously said it can provide extra ventilators to hospitals that need them from a centralized provincial stockpile.

How Canadians across the country are helping each other through the COVID-19 pandemic. 3:04

Ford told reporters Thursday afternoon that with most snowbirds and Ontario residents who had been living outside of the province now back at home, experts have been able to more accurately measure the virus’s spread and project what may happen in the coming weeks.

“Now [we] have the proper measurements,” Ford said.

Dr. David Williams, the province’s chief medical officer of health, cautioned the numbers are forecasts, as opposed to the information that’s currently being shared daily with Ontarians, which is based on firm data.

While Ford is releasing Ontario’s models, the federal government still hasn’t published its own projections for how hard COVID-19 could hit Canada.

However, B.C.’s government released projections last week that included details about the pressure the virus could put on ICU beds.

‘We should be doing more testing in Ontario’

”Based on what we are seeing and the number of tests, I have to say that I am a little bit preoccupied by the situation in Ontario because we should be doing more testing in Ontario,” she told Radio-Canada. “And I hope they’re going to be able to ramp this up.”

A research team with experts from the University of Toronto, University Health Network and Sunnybrook Hospital has also published models looking at how COVID-19 might affect Ontario’s already strained medical system.

One of that group’s models, which CBC News reported on in mid-March, found the province could run out of ICU beds and ventilators in just over a month, even if it cut the infection rate in half.