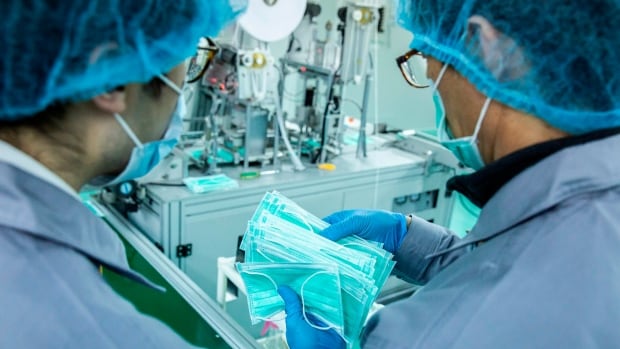 “To your question about whether we had enough — no, we likely did not have enough. I think federal governments for decades have been under-funding things like public health preparedness,” she said during a news conference in Ottawa Wednesday.

“I would say that, obviously, governments all across the world are in the same exact situation.”

Her statement marks a shift in tone within the federal government. As recently as last week, Trudeau said he could “assure everyone that the federal stockpiles have been sufficient to meet the needs of the provinces until this point.”

Hajdu said she didn’t have exact numbers on how large the stockpile is.

WATCH: ‘We likely did not have enough,’ Hajdu

“The numbers change, as you can imagine, day to day as we dispense equipment across the country,” she told reporters.

The Trudeau government announced yesterday that it will spend up to $2 billion to procure personal protective equipment, a measure that came amid growing questions about Canada’s preparedness for a pandemic.

Health care workers across the country have been raising alarms about the lack of N95 masks, with some hospitals and workers saying they have been rationing supplies while they wait for stocks to be replenished.

On the same day that Public Services and Procurement Minister Anita Anand said the federal government is “aggressively buying in bulk from all available suppliers and distributors,” Quebec Premier François Legault warned that his province was just days away from running out of protective supplies.

“It is an extremely competitive space right now for personal protective equipment. We are pulling out all of the stops,” said Hajdu.

“I have heard those stories myself from frontline workers, I know provinces and territories are developing different sets of rules for frontline workers around the disbursement and use of personal protective equipment, but I will tell you that we will not stop this work to get the PPE that we need.”

Chief Public Health Officer Theresa Tam said today the amount of medical supplies needed to cope with the pandemic depends on the actions Canadians take now to physically isolate themselves and slow the spread of the virus.

“The really difficult message, I think, to Canadians is that on a whole range of these scenarios, this health system isn’t well-designed to cope with it if we don’t do something about it now,” she said when asked about best- and worst-case scenarios for Canada.

“Any planning scenario has us potentially overwhelming our health care system.”

The Public Health Agency of Canada serves a national coordination role in planning and preparing for health emergencies, and can do bulk purchasing on the provinces’ behalf — but Tam has said the responsibility for ensuring those inventories are adequate lies with the provinces.

WATCH: Hajdu tells Canadians if ‘we all stopped moving for two weeks’ the virus would die

At the end of February, before the virus was named a pandemic by the World Health Organization, Tam said that while the federal government has a stockpile of some medical supplies, it’s normally reserved for rare, “high-impact” biological or radiological events.

She said in those cases, the federal government can top up provincial and territorial supplies in the event they run short.

A 2011 audit of the National Emergency Stockpile System found that some of what was in the stockpile was out of date. A spokesperson for the Public Health Agency of Canada said that since then, the system has evolved to “better align with the ever-changing risk environment and is investing in strategic assets.”

“There has been increased engagement with provincial and territorial partners and other stakeholders to increase awareness of NESS capabilities,” said Tammy Jarbeau in a statement to CBC.

Hajdu said all governments might want to consider reinvesting in public health and preparedness on the other end of this pandemic.

“But I will tell you that the situation right now is such that our government has the money, we have the will, we have the workforce and everybody’s focus is firmly on getting PPE and we will continue to fight for Canada’s shares in that available stock as it comes online,” she said.