There have been over 500 reported cases of the novel coronavirus connected to outbreaks or confirmed infections at public places like grocery stores, restaurants and day camps across Canada since early July, according to new data on COVID-19 cases.

The data, compiled by the Institute of Investigative Journalism (IIJ) at Concordia University, reveal new details about how the virus has spread across Canada, since July 4, in places where members of the public can gather.

Reporters at the IIJ’s Project Pandemic identified at least 505 reported infections linked to outbreaks or exposures at 148 locations that span across 61 cities in seven provinces.

The newly released statistics are being released at a crucial moment in Canada’s fight against its COVID-19 outbreak, with many provinces and municipalities entering the final stages of their plan to reopen their economies and students set to return to classrooms in September.

Read more: Temperature checks and ‘deep cleaning’ aren’t good at stopping coronavirus. So why do we bother?

According to the data, a majority of the documented COVID-19 exposures or infections were related to food sales — with groceries, restaurants and liquor stores accounting for a total of 198 cases that involved employees and patrons. Only locations open to the public were included in the analysis of data and excluded facilities like long-term care homes or food processing plants.

“The safety and well-being of our guests and employees is our number one priority,” the Cactus Club said in a statement. “While (Alberta Health Services) has not mandated it, we have decided to voluntarily close this location out of an abundance of caution to ensure the health of everyone.”

The owners of Fire and Ice did not immediately respond to a request for comment. 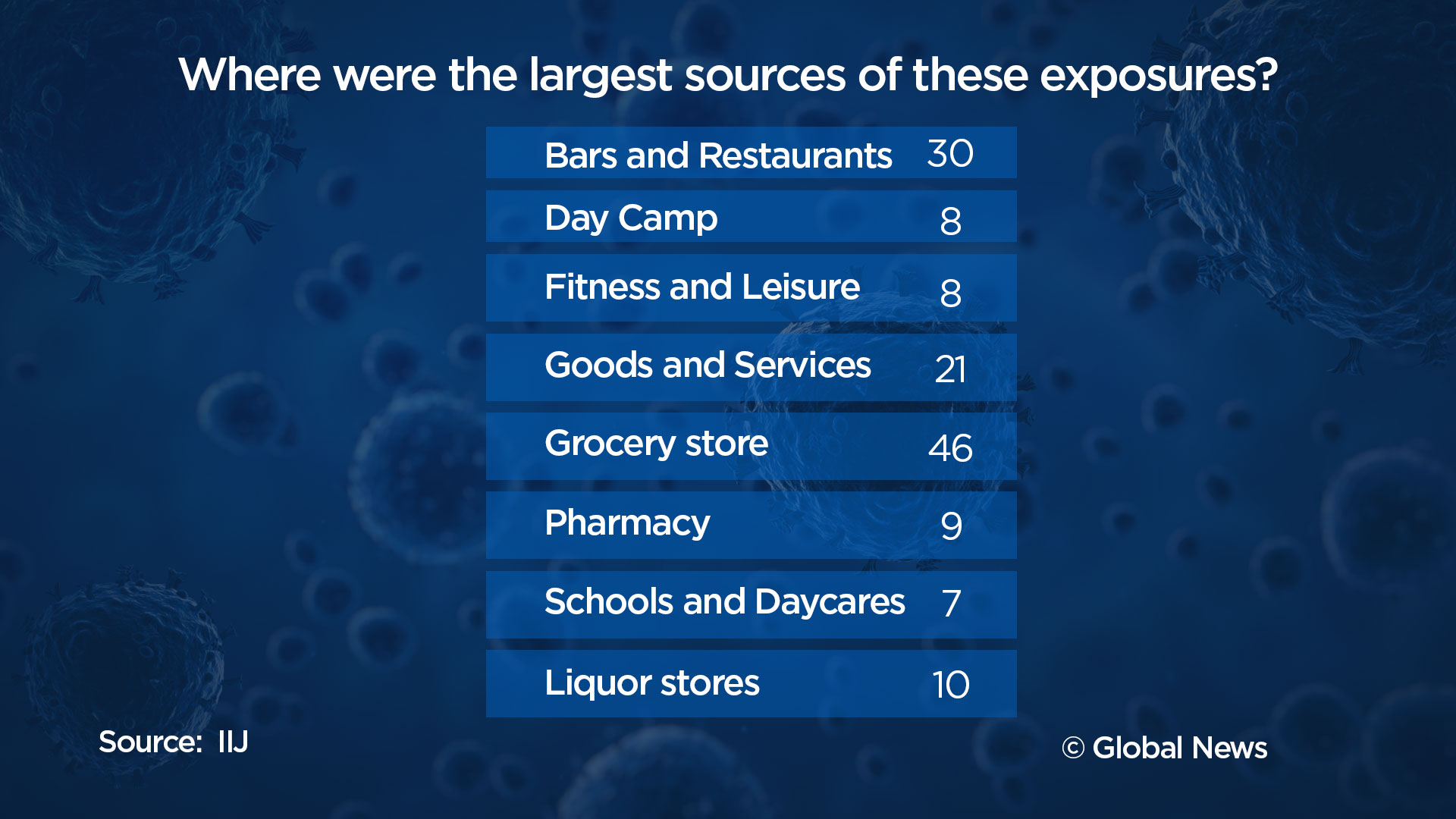 Eight fitness centres were linked to 79 infections, with one location in Alberta accounting for 62 cases. The cases were linked to the Ride Cycle Club in Calgary, which was added to Alberta’s list of confirmed outbreaks in July.

The company has said the studio was informed on July 13 that a member of its training community had tested positive for COVID-19 and “immediately shut down all Calgary operations and deployed a notification and awareness strategy.”

Eight day camps were associated with 46 infections, while schools or daycares had 23 infections at seven locations. One of the largest outbreaks occurred at a day camp on Montreal’s south shore, the Boucherville-based Les Ateliers de Charlot l’Escargot, which has seen at least 28 cases of COVID-19 among kids and staff.

Retail stores, which include electronic and hardware shops, were also among the highest in the country with a total of 21 reported outbreaks. Other public areas that were measured as having fewer exposures or outbreaks included parks, hotels and malls, according to the data.

Saskatchewan and Manitoba had 21 and 11 recorded incidents, respectively, while both British Columbia and Nova Scotia’s reported exposures were in the single digits. 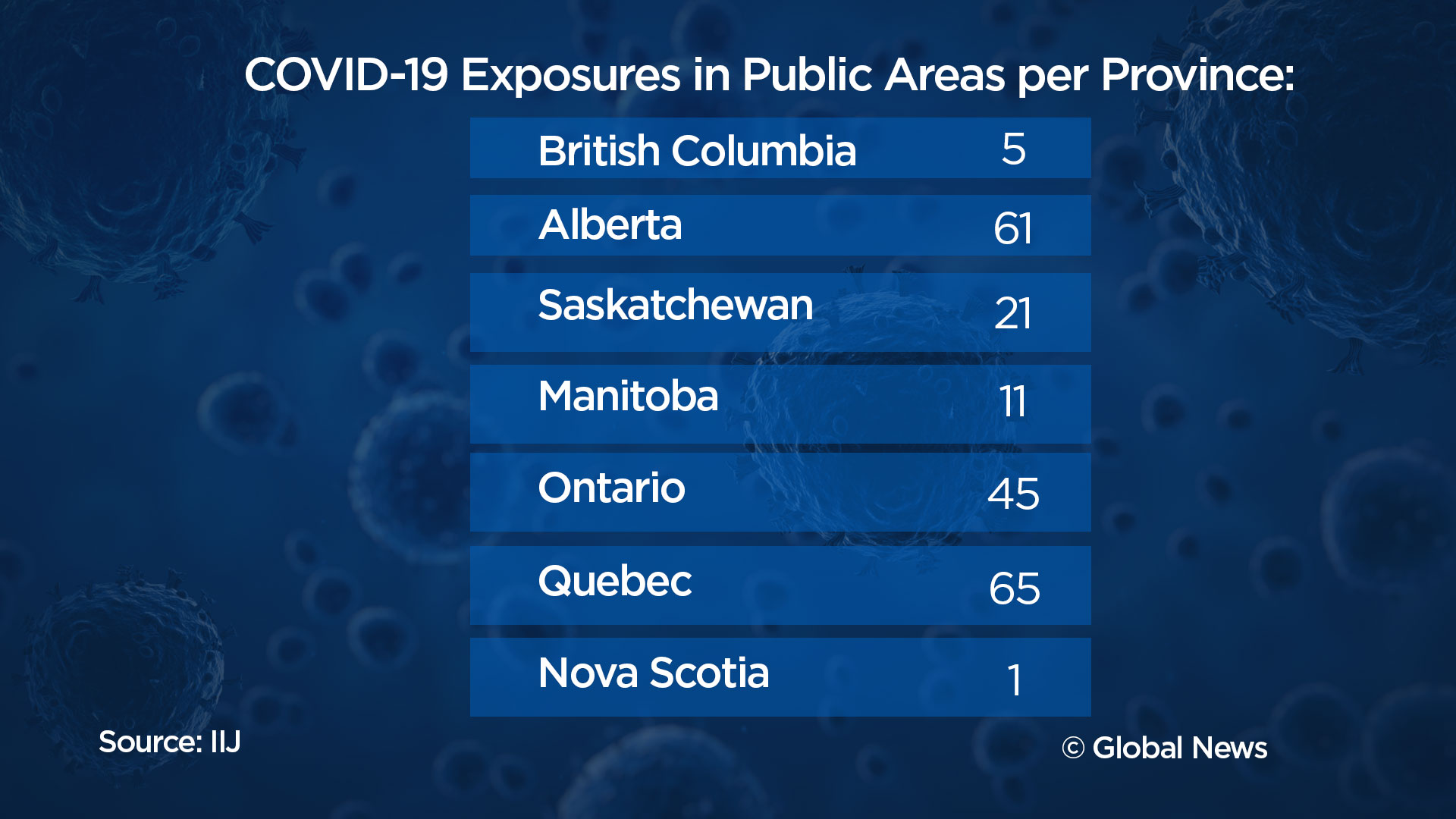 To date, Canada has reported over 119,000 cases of the coronavirus as well as 8,981 deaths. Daily reported increases in coronavirus cases across the country have averaged at about 400 over the past week, according to Canada’s chief public health officer Dr. Theresa Tam.

While new cases of the virus continue to follow a downward trend across Canada, health experts and authorities continue to warn of a potential second wave or another outbreak should measures to prevent the spread of the virus ease too soon.

“Indoor settings where there is lots of people in close proximity for prolonged periods of time are at the greatest risk of transmitting infection,” Bogoch said. “There have even been a few cases transmitted at grocery stores and liquor stores.”

Read more: How close are we to a coronavirus vaccine?

Bogoch said masking, handwashing and physical distancing have had a significant impact on reducing the number of cases across all provinces but warned that we still need to vigilant as more people flock to bars and restaurants and schools look to reopen in the coming weeks.

“Some of this could be undone if people disregard these public health measures,” he said. “If businesses and organizations provide a safe environment for employees and customers, then we will be doing OK.

“If there are breakdowns, then it should come to no one’s surprise that we are going to see a rise in cases in congregate settings.”

New research from the Public Health Agency of Canada (PHAC) found that shutting down communities — closing businesses and asking people to stay home — has a greater impact on reducing the total number of infections than closing schools.

According to a study published Monday in the Canadian Medical Association Journal, researchers with PHAC used computer modelling to evaluate the impact of several of the main interventions used to control the spread of the virus — case detection and isolation, contact tracing and quarantine, physical distancing and community closures — taken both together and alone.

After adding school closures to that mix, they found that while closing classrooms would indeed reduce the rate of infections within schools, it had far less of an impact on the pandemic overall compared to partial community closures, the likes of which were seen across Canada starting in March.

In a scenario without any other public health measures taken, for example, the overall rate of virus infection was 54.7 per cent with schools closed versus .04 per cent with much broader closures, including workplaces and schools.

“When we have high levels of community transmission combined with minimal public health interventions and low adherence to physical distancing, school closures will have a minimal impact in combination with these interventions and will not be sufficient to control the epidemic,” lead researcher Dr. Victoria Ng, senior scientific evaluator with PHAC, said in a statement.

“In contrast, workplace and general community closures were much more effective, because transmission outside of the household is occurring predominantly in these settings,” she said.

Read more: Children under 5 may be carrying high levels of coronavirus, study suggests

The findings come amid intense scrutiny over the decision to reopen schools in all provinces, as well as the effectiveness of the measures governments have in place to protect students.

After peaking in early May, the number of new coronavirus cases in Canada has declined dramatically this summer, though some provinces, including B.C. and Alberta, are seeing a recent uptick.

“The virus doesn’t care about our past efforts. It’s what we do now that matters,” Tam said in her daily statement on Sunday.

“We’ve come too far, lost too much, and have so much to protect. Our biggest struggle is to persevere with our collective effort, to maintain the careful balance of keeping the infection rate low… protecting the most vulnerable, while minimizing the unintended health and social consequences of restrictive public health measures.”

Researchers found that anywhere from 0.25 per cent to 56 per cent of Canadians could become infected over the course of the pandemic depending on the level of public health intervention implemented in the coming months and even years. The infection rate of 56 per cent could occur if no control measures were taken.

According to the study, the infection rate varied and depended on how much testing, isolation, contact tracing and quarantine were carried out, combined with effective physical distancing measures.

And while each of the measures studied was effective at curbing the spread of COVID-19 to varying degrees in the model, none of them except partial community closure could eliminate the virus on its own.

A combination of case detection, isolation and contact tracing — and ramping up those activities along with physical distancing — was crucial to lowering the infection rate to a quarter of a percentage point.

“These interventions would need to be maintained until the epidemic is extinguished (either via herd immunity or vaccination), or there will be a resurgence,” the authors wrote.

Project Pandemic is co-ordinated by the IIJ, with the support of Esri Canada and the Canadian Association of Journalists.