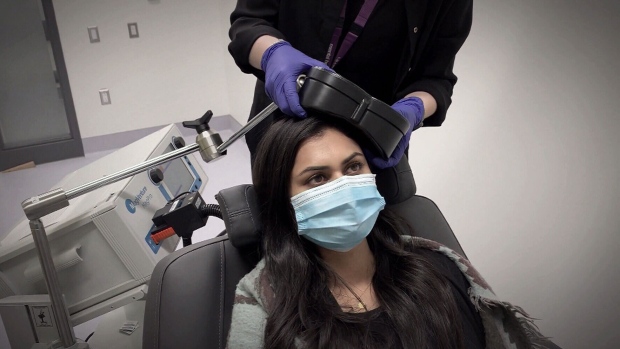 TORONTO — COVID-19 hasn’t just worsened mental health across the country — it’s also cut access to specific medical treatments for those who struggle from severe depression, such as electroconvulsive therapy (ECT).

But the pressure of a pandemic has also spurred scientists to focus on some new therapies in order to keep helping patients, turning necessity into opportunity.

One patient who underwent an experimental therapy during the pandemic believes it could change lives, and even replace ECT altogether.

Kileen Sprock was in need of urgent help a month ago when she turned to a new treatment.

The human resources specialist had struggled with depression on and off for the past five years, undergoing various treatment.

But during COVID-19, she worsened.

“I have been off work, and that has had a huge impact on my life, as you can imagine,” Sprock told CTV News. “Essentially, I am at home. If you’ve ever experienced depression, you know that there’s pervasive sadness, there’s a lack of confidence, a lack of self worth, fatigue, [you get] tired easily, and it was just a really difficult, difficult experience.”

One of the medical therapies she had tried in the past was ECT, which is seen as a last resort for those suffering from depression so severe it will not respond to any other treatment.

But during the pandemic, ECT became more dangerous to administer.

Dr. Daniel Blumberger, director and chair of the Temerity Centre for Therapeutic Brain Intervention with CAMH, explained to CTV News that they had no choice but to cut down on patients due to the threat of COVID-19.

“We were struck with a crisis, because when you do electroconvulsive therapy, there’s a potential to generate aerosols when you have to give oxygen to patients,” he said.

The treatment is performed under anesthesia, and involves small electric currents being passed through the brain. Patients are given oxygen through a mask while they are under, and they are asleep for around five to 10 minutes.

A psychiatrist, an anesthetist and other assistants have to be there for the process, all decked out in full PPE, all afraid of contracting the virus in the process.

But after doctors reduced the number of patients receiving ECT during the pandemic in order to cut down on virus risks for everyone involved, those patients were still in need of care.

“We had to have another solution for these very sick and severely ill patients,” Blumberger said.

When Sprock’s mental health was worsening as a result of the pandemic, it was hard to find anywhere that would treat her due to hospitals cutting down on patients.

“The hospitals were not really accepting new patients for different treatments, unless it was very very serious,” Sprock said.

That’s when she heard of an emerging treatment.

“I had tried so many different treatments, I had done ECT, dozens of antidepressants,” Sprock said. “So this treatment was really, like, why not. Let’s try it, I have nothing to lose.”

A month ago at CAMH in Toronto, she was treated with an accelerated version of transcranial magnetic stimulation.

Repetitive transcranial magnetic stimulation (rTMS), a non-invasive procedure where an electromagnetic coil delivers magnetic pulses to stimulate the brain, is already approved for treating depression. In fact, Sprock had tried it before.

But usually the treatment is delivered once a day for six weeks or longer.

In recent years, scientists have been looking at delivering these magnetic pulses at higher volumes and on faster timelines to improve the treatment, such as intermittent theta-burst stimulation (iTBS), a more efficient version of rTMS that shortens sessions without sacrificing effectiveness. But iTBS still requires daily sessions over six weeks.

With COVID-19 creating pressure on all aspects of medical care, the question of speeding up these treatments was more pressing than ever.

Scientists and doctors decided to intensify and accelerate the treatment, delivering eight doses in a single day over one week, or in Sprock’s case, two weeks.

And she noticed changes quickly.

“I started to feel really, really good,” she said. “Probably about the fourth day of this treatment. It’s hard to articulate, but I showed up for treatment that day, and I just felt brighter. And that had not happened with other treatments that I had been through.”

Although accelerating the treatment is experimental still, preliminary studies suggest it works.

“We think that the number of treatments per day has an effect that we’re able to push the brain past what a once a day treatment would do,” Blumberger said.

In the U.S. – where the accelerated TMS was first tested — researchers report up to 90 per cent remission for patients.

Study results from a randomized controlled trial are pending publication in the spring, according to the lead scientist, Nolan Williams, an assistant professor of Psychiatry and Behavioural Sciences at the Stanford University Medical Center.

Researchers speculate that the treatment is hitting the regions of the brain that are causing the depressive systems more accurately than before.

“We use a special type of brain MRI to localize the exact position,” Williams said. “So we have kind of a personalized algorithm for finding the best spot, based off of the brain anatomy. That’s probably a key difference.”

Doctors in Vancouver have been trying accelerated TMS as well.

OPENING UP POSSIBILITIES DURING CRISIS

Being able to deliver treatment faster and over a shorter period has allowed more patients to get care even during the pandemic, Blumberger said.

“It’s been a big help, because they would have had to potentially wait for ECT or may not have been able to access it.”

The logistics of ECT are also “more complex” than TMS, Vila-Rodriguez added, making it harder during COVID-19 due to the requirement of extra specialized staff and things such as anesthesia. Only one technician is required to physically deliver treatment with TMS.

“You can treat a lot more people than you could treat with with ECT,” Vila-Rodriguez said.

Williams pointed out that getting access to ECT can be very difficult in a non-pandemic year as well.

“In the United States, only about 1.5 per cent of people that meet criteria for getting ECT actually get it,” he said. “So, 98.5 per cent people don’t get it. One of the biggest reasons is [many] hospitals don’t have ECT.”

If accelerated TMS can help as much as ECT, it could be hugely important because it’s more accessible, and doesn’t require as many people.

Some patients also may be wary to try ECT for a variety of reasons.

Mayo Clinic explains on its website that the treatment has a stigma due to how it was sometimes administered in the past, including high doses of electricity without anesthesia, leading to injury and serious memory loss.

In modern times, ECT is only administered with the patient’s informed consent, and 60 – 80 per cent of patients with depression achieve remission after treatment, according to the Centre for Addiction and Mental Health (CAMH), making it one of the most effective treatments for those with treatment-resistant mental illnesses.

But although it is safe, there are still some side-effects.

“We need an alternative to ECT because even though electroconvulsive therapy is the most effective treatment for severe depression, unfortunately it’s also associated with significant side-effects, and one of those side-effects, which is quite troublesome, is impact on memory,” Vila-Rodriguez said.

Sprock said that one of the things she found remarkable about receiving accelerated TMS was how much less invasive it was compared to ECT, adding that her only side-effect so far has been headaches the day she received treatment.

ECT had some impact when she received it in the past, she said, but it did come at a cost.

“I had memory loss that was quite severe for about a year,” she said. “Slowly, my memory did come back as time went on. I still have a little bit of memory issues, but I can’t say that is too too bad. But with [accelerated TMS] there’s been no impact to memory. Wonderful.”

Sprock believes the therapy is so revolutionary that it could completely replace ECT, adding that if accelerated TMS had been around five years ago, she would have chosen it over trying ECT.

When she’d been treated with the original TMS before, she had experienced slight improvements, which didn’t last long. But this was night and day.

Sprock almost felt the way she used to before depression, she said.

“I’m happy I’m chatty,” she said. “I’m back to being bubbly. So it really has changed my life. At this point, I do have six more months of follow up. They do assessments every week where they’ll test to see how I’m doing, and based on where I am, I might go in for booster treatments. But otherwise, if all goes well in six months, I hope to be back to working.”

Scientists are now planning a formal study to measure this accelerated treatment’s effects to see if it truly is an alternative to ECT for some patients.

For now, it remains a last resort to help those in crisis during the pandemic.

Resources are available in communities across Canada for anyone struggling with anxiety, depression or other mental health concerns. 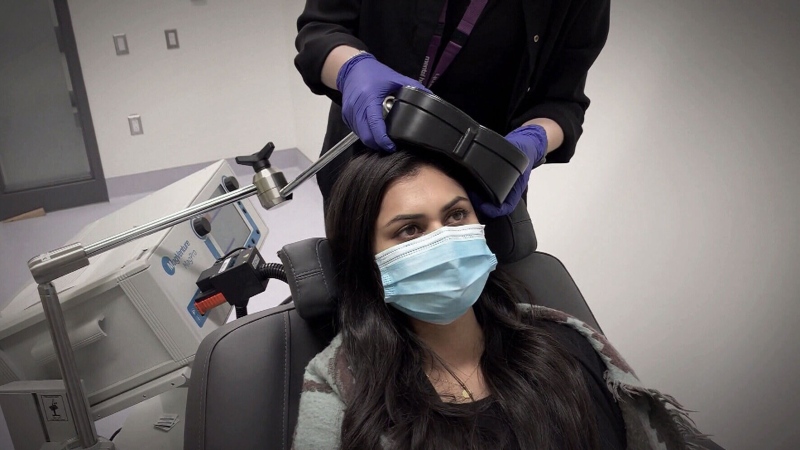