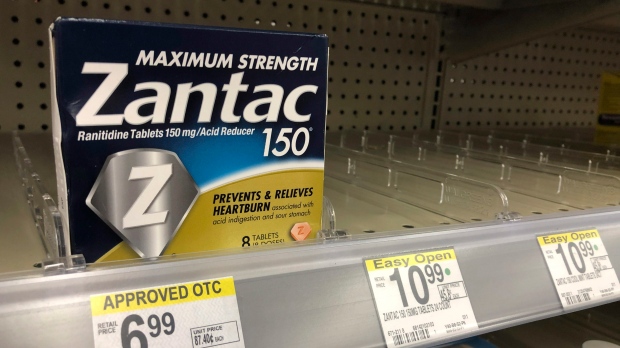 TORONTO — The U.S. Food and Drug Administration announced Wednesday that it is asking manufacturers and pharmacies to cease production and sale of over-the-counter Zantac, a medication that treats heartburn, due to potential contamination.

According to the FDA, the medication could contain a nitrosamine impurity called N-nitrosodimethylamine (NDMA).

An investigation into the levels of NDMA within ranitidine medication has been ongoing since the summer of 2019, when laboratory testing found NDMA in ranitidine. Ranitidine is a drug that blocks the over-production of acid, and can be used to treat and prevent ulcers in the stomach as well as heartburn.

Zantac is the brand name for ranitidine medication. The recall extends to generic versions of ranitidine as well.

The FDA said last September that “NDMA is classified as a probable human carcinogen (a substance that could cause cancer) based on results from laboratory tests.”

NDMA is present in low levels in both food and water, the FDA said in their newest press release.

After months of investigation, the FDA found that the levels of NDMA in ranitidine medications increase “even under normal storage conditions,” and increase at a higher rate when exposed to temperature increases — including increases that might occur during distribution and handling by customers.

“We didn’t observe unacceptable levels of NDMA in many of the samples that we tested. However, since we don’t know how or for how long the product might have been stored, we decided that it should not be available to consumers and patients unless its quality can be assured,” said Janet Woodcock, M.D., director of the FDA’s Center for Drug Evaluation and Research, in the FDA’s press release.

Health Canada has not issued any recalls for the medication in Canada.

They told CTVNews.ca in an emailed statement that they are working “with companies and international partners to understand the root causes of nitrosamines in drugs.

“The Department will take action if a risk to Canadians is identified, and will be vigilant in informing the public of any new safety information,” they said.

The FDA have recommended that anyone who currently takes the medication stops using it, and finds over approved over-the-counter products to replace Zantac with.