Almost a year into the pandemic, several provinces in Canada do not have sufficient plans in place to tackle COVID-19 in long-term care homes, according to a new report.

The study published by the Canadian Centre for Policy Alternatives (CCPA) on Tuesday found that six out of 10 provinces — Newfoundland and Labrador, Prince Edward Island, New Brunswick, Manitoba, Saskatchewan and Alberta — have not been able to access the full amount of federal LTC funds because of that.

“Long-term care being at the epicentre of deaths in the pandemic, it is surprising that several provinces just aren’t committing the resources, aren’t putting the plans in place that would allow them to access this federal money,” said David Macdonald, study author and senior economist at CCPA.

Macdonald said this comes as a “warning signal” for the feds.

“If you’re just sending out cheques and you don’t have to see those plans in advance, then you’re going to end up with provinces that have unspent money.”

In March, the federal government announced a raft of measures and emergency funds to help provinces respond to the pandemic.

This was a direct transfer with cheques sent out to provinces and they could spend it how they wanted to, MacDonald said.

Up to $1 billion was also committed for the Safe Long-term Care Fund, as part of the fall fiscal update, to help provinces and territories protect people in long-term care. However, this funding was contingent on a detailed spending plan. Provinces have been unable to access at least $149 million of those funds as they don’t have plans in place to apply for them.

“They (provinces) had to show that they were doing something and then the federal government would back them,” Macdonald said.

Since the start of the coronavirus pandemic last March, long-term care homes across Canada have been hit particularly hard.

Advocates say the devastating toll has underscored the need for increased public funding for home care.

Read more: Coronavirus vaccine a ‘light at the end of the tunnel’ for LTC homes

Long-term residents and staff in the largest province of Ontario are still bearing the brunt. More than 40 per cent of Ontario’s long-term care homes are currently reporting COVID-19 outbreaks, according to the latest provincial data. LTC residents there account for almost 60 per cent of the total deaths so far.

In a press conference on Jan. 22, a coalition of 100 health-care organizations and families called on Premier Doug Ford for immediate action to address the staffing crisis and unsafe conditions in Ontario’s of LTC homes.

Overall, the province has spent one per cent of the GDP for COVID-19 related measures. In contrast, British Columbia’s COVID-19 response has been far more robust than any other province, devoting almost three per cent of GDP to its COVID-19 measures.

Going forward, Macdonald said he expects the federal government to set up a new fund to support national standards on long-term care, as well as a substantial infrastructure plan.

“This will back provincial efforts that pre-existed,” he said. 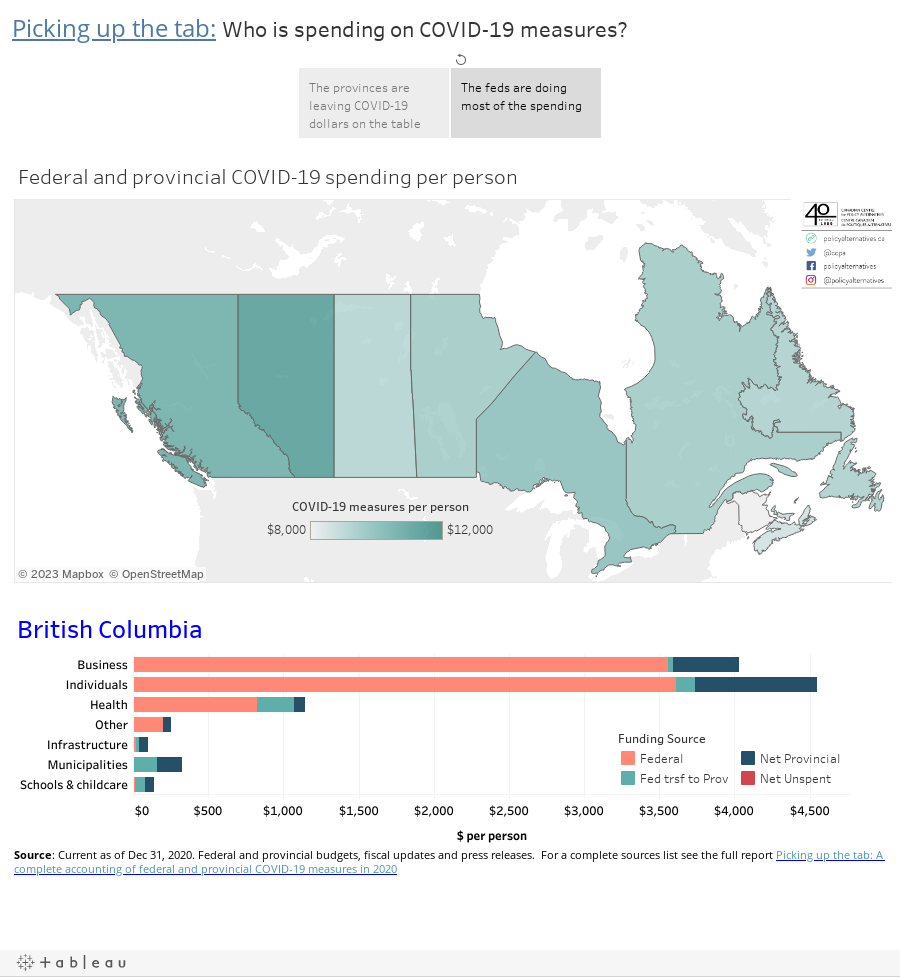