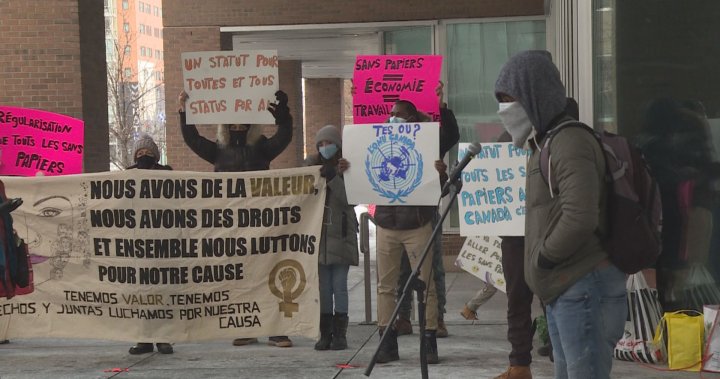 The demonstrators gathered outside Complexe Guy Favreau, which houses Government of Canada offices.

They peacefully held up signs and even danced to music in order to stay warm.

The protesters said many undocumented migrants who have night jobs in factories or cleaning offices are now afraid to go to work because of Quebec’s COVID-19 curfew.

Even though they’re allowed to travel to their jobs, some with precarious immigration status fear deportation if they’re stopped by police.

“They allow police to check for your status,” said Hady Anne, who is originally from Mauritius in Africa and said he came to Montreal three years ago by crossing from the US through Roxham Road.

“Even at the daytime, you don’t want to meet police. On the nighttime, that is another problem.”

He said many undocumented workers in essential jobs are now living in fear, and demanded the government give them legal status.

“They don’t want to take the risk and are having to stay home, with no work and isolation, anxiety and suffering. That’s why we are here,” said Eloy Rivas, a spokesperson for Solidarity Across Borders, the group that organized the protest.

The protestors want the government to give the workers legal status so they can have access to COVID-related aid programs, and work without fear of being deported.

Neither Canada’s nor Quebec’s immigration ministries responded to a request for comment on Saturday.