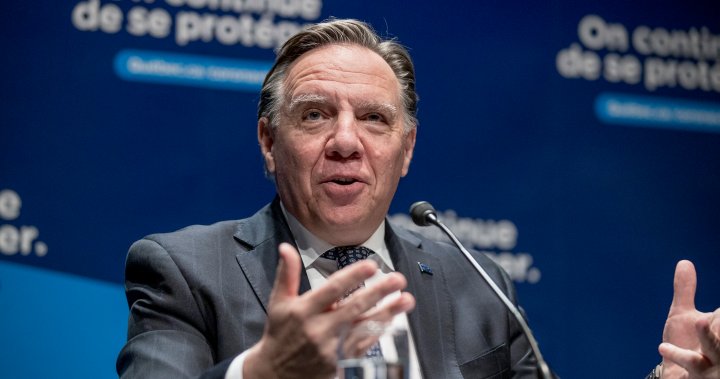 Quebec’s premier is crediting the nightly curfew for a decline in daily new cases of the novel coronavirus over the past 10 days, but he warns it is unlikely the province will ease its latest lockdown measures.

“As long as the number of hospitalizations stay this high that you can’t think in the next few weeks we will open everything and allow contact,” François Legault told reporters Thursday.

Legault said “everything is on the table” when it comes to extending restrictions in place to curb the spread of COVID-19, especially in the hard-hit Montreal and Laval areas.

The most recent lockdown rules, which include a curfew from 8 p.m. to 5 a.m., are in effect until at least Feb. 8 in an effort to break the evolving second wave of the pandemic. Amid calls for amnesty for the homeless population after a man was found dead in Montreal, Legault said everyone wants to help the homeless, adding that those who criticized his government are trying to sow division in society.

Legault maintains that the nightly curfew has curbed transmission and limited people from seeing one another, but health experts said Wednesday that it’s still too early to know if that’s the case — or if the declining number of cases is due to a mix of restrictions.

Yet, the premier says that while the province is headed in the “right direction,” there is still a long way to go.

“We want to see a significant drop in hospitalizations before we lower our guard,” he said.

Citing the risk of bringing COVID-19 variants into the country, Legault once again urged the federal government to ban non-essential international flights. However, Legault said if Ottawa allows travel to continue then Quebec wants travellers to have to quarantine in hotels and foot the bill.

“I think we cannot any chances with the new variants,” he said.

The health crisis has led to the deaths of 9,273 Quebecers to date. The death toll, which remains the highest in the country, was adjusted after an investigation found a previous death was incorrectly attributed to the virus.

Hospitalizations related to COVID-19 dropped by 14 to 1,453. Of those patients, the number in intensive care units remains unchanged at 216.

When it comes to screening, health authorities say 32,845 tests were carried out Tuesday. Since the beginning of the pandemic, more than 5.5 million tests have been given.

Quebec stands by plan for second dose of vaccine

As of Thursday, nearly all residents in long-term care homes (CHSLDs) in Quebec have received their first dose of the vaccine against the virus.

Since the campaign launched in December, the province’s priority has been to inoculate residents in those centres and health-care employees on the front lines of the pandemic. More than 186,000 people have been vaccinated to date.

The government announced last week that the second dose of the vaccine will only be administered within 42 to 90 days after the first. Vaccine manufacturers Pfizer and Moderna propose intervals of 21 and 28 days, respectively.

The measure has been criticized by Quebecers who want their second dose but Health Minister Christian Dubé has said the goal is to vaccinate as “many vulnerable people as possible.”

Dr. Horacio Arruda, director of Quebec public health, said he’s aware of reports from Israel suggesting one dose provides significantly less protection than the two doses required by vaccine manufacturers. He said he’s waiting to read scientific papers on the efficacy of a single dose before the province changes course.

Quebec has also revised its vaccination rollout plans due to shipment delays of the Pfizer vaccine. Its goal is to give 225,000 doses by Feb. 8 instead of the previously announced 250,000 target.

It still plans on giving the vaccine to residents in private seniors’ homes (RPAs) starting next week.

— With files from The Canadian Press