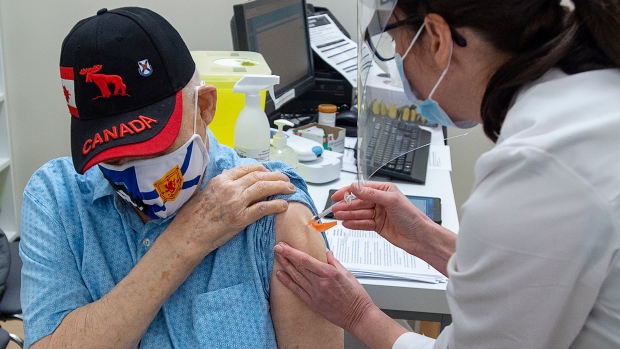 Some of Canada’s doctors are feeling high levels of fatigue and anxiety one year into the COVID-19 pandemic according to a new survey by the Canadian Medical Association, and concern over the country’s vaccine rollout was indicated as one of the main reasons.

The CMA survey, conducted on 1,648 practising physicians who responded between Feb. 18 and 22, found 69 per cent felt an increase in fatigue over the last year, with 65 per cent experiencing anxiety around the pandemic.

The survey results were released Wednesday, marking nearly one year since the World Health Organization labelled the COVID-19 crisis a global pandemic on March 11, 2020.

The CMA says respondents indicated that longer time with social restrictions (64 per cent), continued uncertainty about the future (63 per cent) and concerns about Canada’s vaccine rollout (62 per) were contributing negatively to their mental health.

The survey found that 81 per cent of respondents said an efficient vaccine distribution strategy would be the key priority in responding to the pandemic. Over half of the respondents gave the current rollout poor marks.

Canada’s vaccine rollout stalled through February as shipping delays affected supply of Pfizer-BioNTech and Moderna’s products. The rollout has ramped up in recent weeks as supply was restored, but Canada still lags behind several countries in doses administered per population.

Ninety-three per cent of the doctors surveyed by the CMA said vaccine supply was the key challenge with the vaccine rollout. Clear direction on priority groups (52 per cent), and lack of engagement of doctors in vaccine rollout and delivery (39 per cent) was also mentioned.

The CMA survey also explored governments’ handling of the pandemic, with over half of respondents rating provincial and territorial governments poorly in managing the rollout. Sixty-one per cent rated the federal government’s vaccine supply strategy as poor or very poor.

The recent approval of vaccines from Oxford-AstraZeneca and Johnson & Johnson is expected to allow Canada’s inoculation plan to expand further in the coming weeks.

Just over 5.1 per cent of Canadian residents had received at least one dose of a COVID-19 vaccine as of Tuesday afternoon.

“The vaccine rollout is the light at the end of the tunnel for Canadians, including doctors, whose mental health has been battered by this pandemic,” CMA President Dr. Ann Collins said in a press release. “Despite the heroic efforts and guidance from our public health colleagues and health workers, we’re off to a rocky start with the rollout — not getting this right is not an option.”

This report by The Canadian Press was first published March 10, 2020.