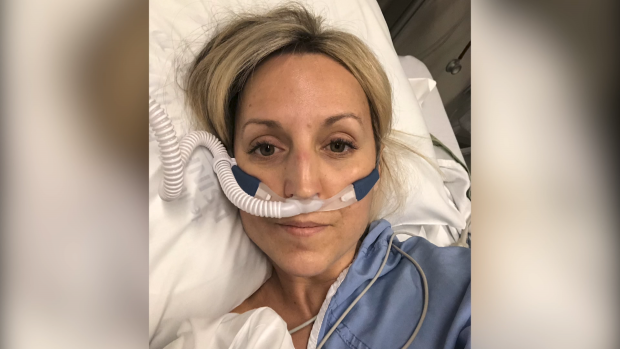 VANCOUVER — Dozens of people in the Vancouver area who were previously hospitalized with COVID-19 have been tracked by UBC researchers, who found the majority are still reporting symptoms months after their initial illness.

Of the study’s 78 participants, 76 per cent reported changes to their quality of life, including weakness, problems sleeping, anxiety and shortness of breath.

“When we did breathing tests for people three months after symptom onset, over half of those patients had abnormality in their breathing test,” said lead author Dr. Alyson Wong. “When we looked at follow-up imaging and we did CT scans … three months after symptom onset, 88 percent of patients had persistent abnormalities, which was much higher than what we were expecting.”

One-in-five had CT scans that showed lung scarring, which study co-author Dr. Chris Carlsten says is the most disturbing finding. “Much like scarring in another part of the body, it’s essentially permanent,” he said. “That scarring will lead to some comprise in lung function.”

Study participant Jaclyn Robinson, herself a nurse at Vancouver General Hospital, was hospitalized with COVID-19 in March. She was intubated for seven days.

“I understand I had an extremely rare case. I had no pre-existing conditions, I end up on a ventilator, I almost lost my life to this virus,” she said.

Lung function tests found she has reduced lung volume and her CT scans still show COVID inflammation, but no permanent scarring in her lungs.

“I still today have some some residual lung pain, so deep breaths, exertion I feel pain. So that’s still there, unfortunately,” said Robinson. “I’m a study participant because this virus is so new, we want to see what the short and long term impacts are on patients like me.”

Dr. Wong said while only time will tell with COVID-19 patients, he believes “we are going to see a significant amount of people who have lasting impacts.”