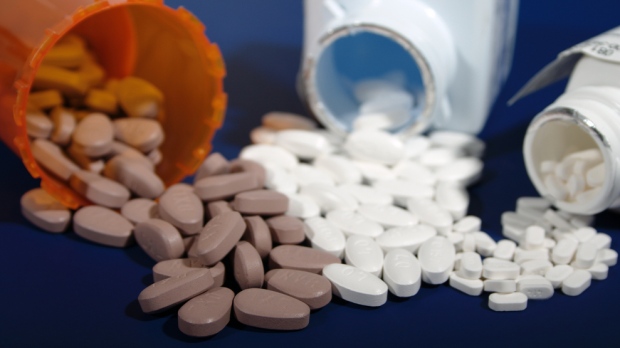 TORONTO — While researchers race to find treatments for seriously ill patients battling COVID-19 around the world, more attention is being paid to a decades-old anti-malarial drug as one possible answer.

Following anecdotal evidence from doctors around the world about benefits and some very high-level praise, the U.S. Food and Drug Administration has issued a limited emergency-use authorization for chloroquine and hydroxycholoquine for doctors treating patients who have run out of other options.

But health authorities are urging the public to be very careful about ingesting chloroquine and hydroxychloroquine without a doctor’s supervision, and at least one death has been linked to the drugs, which are approved to treat malaria, lupus and rheumatoid arthritis.

Worldwide clinical trials are planned or underway to see if the drugs, initially developed to combat malaria during the Second World War, could have any benefits in treating those with severe novel coronavirus infections.

In a statement published Sunday, the U.S. Department of Health and Human Services said drugmakers had donated doses of chloroquine and hydroxychloroquine to a national stockpile.

It said the FDA had allowed them “to be distributed and prescribed by doctors to hospitalized teen and adult patients with COVID-19, as appropriate, when a clinical trial is not available or feasible.”

In tweets and press conferences over the last week, U.S. President Donald Trump has alleged that the drugs could be a “gift from God” and medical “game-changers,” despite repeated warnings from scientists and public health authorities.

Dr. David Juurlink, a pharmacologist and internal medicine physician at Sunnybrook Health Sciences Centre in Toronto, says the buzz around the drugs is “dangerous.”

“We have very little evidence to show these drugs do anything of value for COVID-19 patients and we have no reason to believe they prevent infections,” he told CTVNews.ca on March 23.

But Juurlink, who is an expert in medical toxicology, worries that Trump’s repeated and “irresponsible” endorsements of the drugs, combined with fear and desperation during an unprecedented health crisis, will drive some people to make irrational decisions.

Digital news agency Storyful even found price surges on a non-pharmaceutical version of chloroquine phosphate, which is sold online for treatment of harmful organisms in fish tanks. In one listing, the price for a single 25-gram bottle rose from US$9.99 on Feb. 25 to over $500 on March 2.

“Some people grasp for the toilet paper, some grasp for the dried pasta and others will grasp for medicines,” said Juurlink. “The difference is that you can die from these drugs. They aren’t to be toyed with.”

Banner Health, a large non-profit health care system based in Arizona, reported last week that a man in his 60s died and his wife, also in her 60s, landed in critical care after they both took chloroquine phosphate. She later recovered and warned others about ingesting the compound, which in its non-medicinal form is used to clean aquariums.

“Given the uncertainty around COVID-19, we understand that people are trying to find new ways to prevent or treat this virus, but self-medicating is not the way to do so,” said Dr. Daniel Brooks, Banner Poison and Drug Information Center medical director.

“The last thing that we want right now is to inundate our emergency departments with patients who believe they found a vague and risky solution that could potentially jeopardize their health.”

But is there any hope behind the chloroquine hype?

Researchers are studying how to repurpose existing drugs to battle the novel respiratory virus sweeping the world.

The World Health Organization has included both chloroquine and hydroxychloroquine in a rapidly deployed COVID-19 clinical trial called SOLIDARITY that is studying four groups of drugs. That effort involves eight countries, including Canada.

The WHO scientific panel designing SOLIDARITY first chose drugs based on their likelihood to work, safety data, and likelihood to be available in supplies sufficient to treat substantial numbers of patients if the trial shows they work.

That panel initially left chloroquine and hydroxychloroquine off the list, but changed its mind at a meeting in Geneva on March 13, because the drugs “received significant attention” in many countries.

But in a paper published March 20, the U.S. Society of Critical Care Medicine said “there is insufficient evidence to issue a recommendation on the use of chloroquine or hydroxychloroquine in critically ill adults with COVID-19.”

Health authorities across Canada have urged people not to consume any medicine without a doctor’s orders.

“It can be quite dangerous,” said Canada’s chief medical officer Dr. Theresa Tam at a press conference last week. “These drugs are not without side effects and the side effects are significant. People have to be really, really careful about this. Don’t do it.”

Chloroquine has been used since the 1940s to treat malaria, and more recently by those with lupus and chronic rheumatoid arthritis.

But when taken in incorrect doses, it has dangerous side effects, including death. Even when taken correctly, it can cause stomach distress and vision damage. Hydroxychloroquine is considered a generally safer alternative, though in rare cases it can damage the heart.

Doctors in Nigeria have reported cases of poisonings with chloroquine, which is widely available without prescription in many countries.

“Please DO NOT engage in self-medication,” the Nigerian Centre for Disease Control said in a tweet. “This will cause harm and can lead to death.”

Buzz has been growing about the drug since March 13, when blockchain executive James Todaro tweeted that chloroquine showed promise as “a highly effective treatment” for the respiratory disease. Todaro, who holds a medical degree, linked to a document he had co-written about the idea.

Then Stratechery, a tech blog widely read in Silicon Valley, linked to Todaro’s document. Tesla and SpaceX CEO Elon Musk followed up with a tweet about the idea. Soon it was Trump’s turn to sing the drug’s praises in media briefings last week.

Trump then tweeted that chloroquine has “a real chance to be one of the biggest game changers in the history of medicine.”

But officials at the U.S. Food and Drug Administration had to rush to clarify Trump’s incorrect statement that the drug had been fast-tracked for approval to treat COVID-19.

“There are no FDA-approved therapeutics or drugs to treat, cure or prevent COVID-19,” the FDA said in a statement. But it said it was working with researchers to determine whether chloroquine can be used “to treat patients with mild-to-moderate COVID-19 to potentially reduce the duration of symptoms, as well as viral shedding, which can help prevent the spread of disease.”

The FDA also indicated it will ask drug makers to ramp up production of the drug in case it does prove useful in treating COVID-19.

‘Wait for science to do its job’

Small-scale studies in China and France have shown some positive effects of chloroquine and hydroxychloroquine in reducing both the duration and symptoms of COVID-19 in combination with an antibiotic called azithromycin.

But Juurlink stresses that the evidence so far is anecdotal, rather than the scientifically rigorous, randomized and controlled clinical studies that are normally used over several years in the development and approval of drugs.

“I am optimistic that hydroxychloroquine will be found to be useful, but just how that will be, we just don’t know yet,” he said. “Test tube data has shown it can interfere with the reproduction of viruses but what happens in a test tube and what happens in a person are very different things.”

Juurlink said a vaccine is a year or 18 months away but that data gathered worldwide could point to safe and effective treatments within a month or two.

“I’m so impressed with how scientists around the world have marshalled together. We will look back a year from now and marvel at how much was done in such a short time, but we are just at the beginning of it all.”

The key right now is preventing and slowing the spread of the virus to give researchers and clinicians the time to develop treatments to minimize symptoms and get people out of hospital faster.

“People need to wait for science to do its job.”

Drug-maker Novartis has vowed to donate up to 130 million doses of hydroxychloroquine to support the global pandemic response.

Concerned about a run on the drugs amid shortages reported in the U.S., rheumatologists, patients and medical organizations focused on lupus and arthritis are urging drug-makers and governments to ensure an adequate supply to existing patients.

For those living with lupus, a chronic autoimmune disease, hydroxychloroquine is proven to reduce mortality by 50 per cent, prevent disease flares and cardiovascular complications, and reduce the need for hospitalization, according to a press release from Lupus Canada.

“While we welcome clinical trials, and applaud pharmaceutical companies who have donated the drug for these trials, in an attempt to find a treatment for and slow the spread of COVID-19, we are greatly concerned about irresponsible messaging, suggesting that ‘everyone’ should take this drug in the face of very little evidence,” said Dr. Christine Peschkin, chair of the Canadian Network for Improved Outcomes in Systemic Lupus Erythematosus (CaNIOS) and head of rheumatology at the University of Manitoba.

“As a result, we are concerned at the difficulty Canadians living with lupus are having filling their prescriptions of hydroxychloroquine.”

The National Institute of Excellence in Health and Social Services (INESSS), the Quebec authority on drugs, asked pharmacists on Friday to reserve these drugs for people with systemic lupus erythematosus,pregnant women at risk of relapse during pregnancy and in children and adolescents under 18 years of age with juvenile idiopathic arthritis.

Other people with chronic conditions will not be able to get these two drugs in Quebec unless they have a medical prescription to continue their treatment.