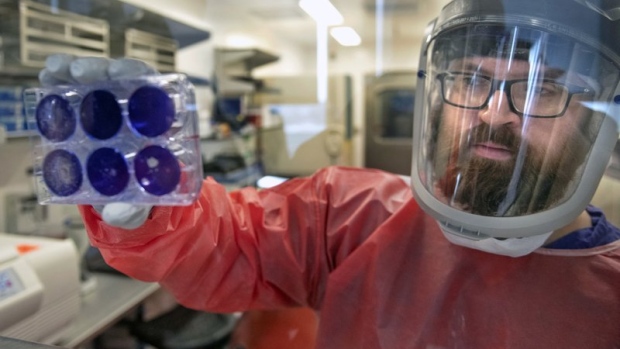 TORONTO — With no vaccine for COVID-19 expected for another year or more, Canadian scientists are among thousands of international researchers racing to find a way to immunize people against the new coronavirus.

Back in January, China published the genetic sequence of the virus, firing the starting gun for dozens of research labs across the world, with human trials around the corner.

As the world waits with bated breath, the World Health Organization last week appealed for a shift toward public health strategies that allow us “to live with this virus” until a vaccine emerges.

CTV News infectious disease specialist Dr. Abdu Sharkawy said there was “no question” research in Canada was underway to find a vaccine for COVID-19.

“While we’re very excited and we’re heartened to see that there’s been this tremendous collaboration between people here in Canada and around the world, I can’t overemphasize the fact that a vaccine is not our solution here,” Sharkawy said.

“A vaccine is something we’re looking for in the future. This takes months of development when we talk about purifying the extract from the vaccine to actually formulate it in terms of animal testing, in terms of testing on healthy volunteers and then safety assessment beyond that.”

A vaccine works by introducing part of the virus to the human immune system, usually at a low dose delivered by injection, to prompt the system to produce antibodies to the disease without doing harm.

Clinical trials, an essential precursor to regulatory approval, usually take place in three phases, according to The Guardian.

The first, involving a few dozen healthy volunteers, tests the vaccine for safety and monitors for adverse effects. The second, involving several hundred people, usually in a part of the world affected by the disease, looks at how effective the vaccine is and the third does the same in several thousand people.

In Canada, vaccine projects are already underway in at least six universities, according to the Canadian Press.

Scientists at the University of Saskatchewan are trying to identify what common lab and agricultural animals can be infected with the virus to better understand which animals may pose a risk.

The team will also use animals to ensure proposed vaccines don’t worsen the infection and to determine whether animals can be used to test safety of vaccines.

At Laval University in Quebec City, scientists who have already had success against the Zika and MERS viruses are trying to develop a COVID-19 vaccine by reverse-engineering the genetics of the newl coronavirus.

Laval is also host to a project hoping to use microscopic nanoparticles to enhance the strength of an immune response and the speed of that response for any new vaccine.

A University of Alberta cancer researcher and his biotech company are working on a DNA-based vaccine for the COVID-19 virus.

And University of British Columbia scientists are examining the effectiveness of previously known drugs against the novel coronavirus.

“We’re looking at several months at the very least, we can’t afford to look that far ahead,” Sharkawy said.

“Right now, we have to focus on stemming the tide of this infection right now in our own homes, in our own communities. So hand-washing, physical distancing, making sure we take care of all vulnerable segments of the community. That’s much more important. Please don’t look at the vaccine as a way out of this.”

The Guardian reports that about 35 companies and academic institutions are working to create a vaccine, at least four of which have been tested in animals.

The first of these, produced by Boston-based biotech firm Moderna, will enter human trials imminently.

“Like most vaccinologists, I don’t think this vaccine will be ready before 18 months,” Annelies Wilder-Smith, professor of emerging infectious diseases at the London School of Hygiene and Tropical Medicine, told the British newspaper.

Johnson & Johnson said on Monday it had selected a lead candidate vaccine for the new coronavirus that would move to human trials by September and could be ready for emergency use by early next year.

The pharmaceutical company has signed an agreement with the U.S. government’s Biomedical Advanced Research and Development Authority to invest US$1 billion in the effort, it said in a statement.

Science magazine, the peer-reviewed academic journal of the American Association for the Advancement of Science, has said developing a COVID-19 vaccine will take a global research effort on the scale of the one that led to the creation of the atomic bomb.

An editorial said 44 vaccines are in early development and manufacturing enough of the eventual vaccine will require worldwide co-operation.

G20 nations on Thursday announced a US$5-trillion injection to boost the global economy and pledged to “work together to increase research and development funding for vaccines and medicines.”

Oslo-based nonprofit the Coalition for Epidemic Preparedness Innovations, which is leading efforts to finance and coordinate COVID-19 vaccine development, has called for US$2 billion in funding.

Meanwhile, the United States is funding several companies through its Department of Health and Human Services and National Institutes of Health, according to AFP.

French drugmaker Sanofi has partnered with the U.S. government to produce a vaccine candidate, while a team at the University of Texas also has a candidate ready.

– With files from The Canadian Press, Associated Press and AFP