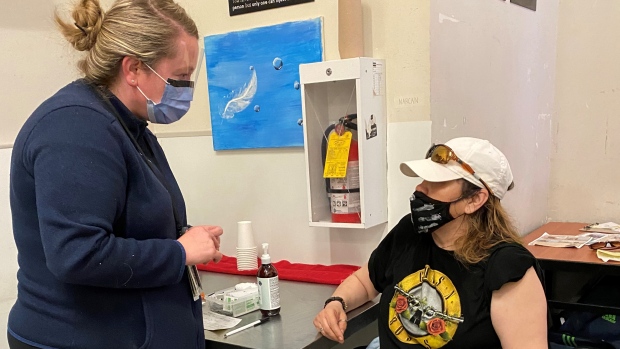 VANCOUVER — Just off Vancouver’s Hastings Street, in the city’s Downtown Eastside, a team of nurses and outreach workers gather in an alley.

Together they set-up a tent, table and a white board with the words “DTES Residents 1st Dose” scrawled across it.

“There’s a much greater risk of COVID transmission here,” said Elizabeth Holliday, who heads the community’s vaccine rollout program. “We’ve really tried to bring clinics to where people are people, rather than expecting people to come to us.”

The neighborhood is one of the most marginalized and poorest in all of Canada. It’s also been a COVID-19 hotspot in B.C. For weeks, vaccination teams have been targeting the area in hopes of slowing the virus’ spread. The effort has paid off, with officials saying the community is getting closer to herd immunity.

“This is a community that is vulnerable in a lot of different ways and experiencing COVID in an exacerbated way,” said Holliday. “It really makes sense to start an immunization campaign here and take a whole community strategy.”

The pop-up clinic, which is one of about five held in different locations every week, is inside a backroom adjacent to a needle exchange depot which offers harm reduction supplies,such as clean syringes for IV drug users.

In the small space, three community nurses deliver shots of the Pfizer-BioNTech vaccine to anyone who lives on the streets or in congregate settings like shelters.

“I’ve been asking around where I could get the shot,” said Sonia Constant, who lives in the DTES. “We just happen to be walking by and there they were all ready for us.”

Constant had COVID-19 earlier this year. She says the virus made her very sick and she still suffers with fatigue and breathing difficulties.

“I can’t walk from here to the end of the alley without gasping for air,” and because of that, “I really wanted the vaccine.”

According to Vancouver Coastal Health, many residents of the DTES are “medically vulnerable” and more likely to be hospitalized or die because of COVID-19.

The health authority, one of the largest in the province, also said with so many people living on the street or in shared rooms it’s “difficult to fully self-isolate” or adhere to pandemic protocols like physical distancing.

“Living down here, living in the street, there’s a lot of people in the alleys, there’s not a lot of places for people to get physically clean, so there’s a lot of opportunistic infection,” said Wendy Stevens, a Peer Operations co-ordinator in the Downtown Eastside. “It’s my job to work with health-care providers and assist with program delivery down here.”

The 47-year-old also used to live on the streets for 10 years. People with lived experience in the neighborhood have been recruited to help run the vaccine clinics.

“I can relate to what’s going on with people,” Stevens explained. “I have no problem sitting on the ground in the alley,talking to someone about their concerns or helping them navigate the process.”

As of April 28, 11,600 people in the DTES received at least one vaccine dose, of which 80 per cent were residents and 20 per cent were people working in the community.

“We wanted to vaccinate because of the vulnerability these people experience here,” said Holliday. “But the thing that we never lose sight of is the fact that we’re in the midst of what is shaping up to be the worst year of the overdose crisis.”

Along with the pandemic, the community is grappling with a high number of overdose deaths due to a toxic drug supply.

According to the BC Coroners Service, nearly 500 people in the province died of an overdose in the first three months of 2021.

Evidence of that could be seen outside the vaccine clinic, where in a three-hour span, six people overdosed. In each case, a nurse or outreach worker managed to revive the person by either offering oxygen or using the overdose reversal drug naloxone.

“You know it is hard work that everyone has been doing and keeping going, day in and day out,” Holliday said.”Without the care, respect and love for this community it would be hard to come do this work every day.”

In-person outreach has been essential to the success of the pop-up vaccine clinics. With so many people in the DTES homeless, booking an appointment by phone or computer can be very difficult and a barrier to getting a vaccine.

For Martin Gaudet, having the clinic in an alley where he often hangs out makes getting a vaccine more accessible.

“When I first thought about getting the shot I was worried and didn’t know where to go,” he said shortly after getting his first shot of Pfizer. “But now that they are able to do it on the street, I was down for it.”

Meeting people where they are appears to be a strategy that’s paying off.  Since the start of the vaccine program in the DTES, weekly COVID-19 cases have dropped from about 60 to less than 10.

Health officials say the community is now “approaching herd immunity” and they could start offering second doses to residents in two weeks. 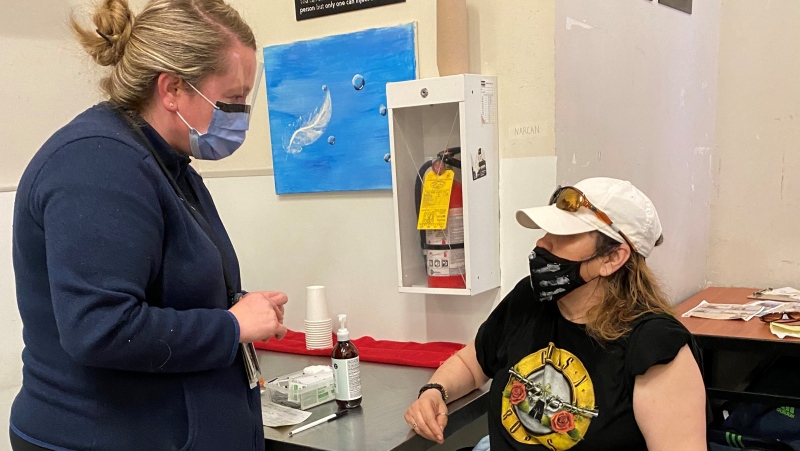