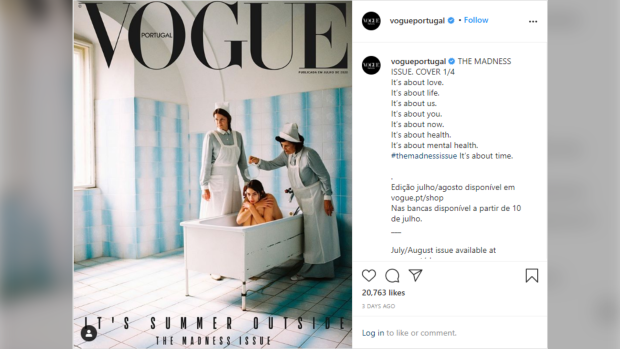 TORONTO — Vogue Portugal has come under fire for a cover for their “Madness” issue that appears to show nurses in a mental hospital pouring water on a model — imagery that advocates say trivializes and glamourizes mental health struggles.

The photo shows a nude model crouched in a bathtub in a larger room decorated in blue and white tile, with two nurses standing above her, dressed in old-fashioned uniforms.

The cover triggered a wave of criticism calling out the “offensive” and “disrespectful” concept.

Comments below the original Instagram post accused the magazine of attempting to “aestheticize” the struggles of mental health by using a mental health institution as a setting for a fashion shoot.

“MENTAL ILLNESS IS NOT AN EDITORIAL CONCEPT,” one Instagram user commented.

Vogue Portugal issued a statement on July 3 saying the cover was intended to “open up the topic of mental health” and spark “discussion.”

The magazine did not address the backlash directly in their statement, or address concerns that the cover was tone-deaf, but said that the issue itself contained interviews with psychologists “and other experts in the field.” They also said the theme of mental health was “not linked to the theme of madness, but instead [was] covered as an aspect of human emotions and behavior.”

They claim the design of the room depicted in the cover was formed after “deep research of hundreds of reportage photographs from some of the most relevant and famous documentarists who have captured mental health hospitals,” confirming that the cover is drawing on the history of mental health institutions for its aesthetic.

“We acknowledge the significance of the topic of mental health and our intention, through visual storytelling, is to shine a light on the important issues of today,” the statement reads.

Poorna Bell, a journalist and author who has spoken up about mental health advocacy since losing her husband to suicide, said on Twitter that Vogue Portugal’s defence was “unbelievable.

“The discussion has been had,” she wrote. “You’re late to the table and offensive.

“I don’t have patience or time for people and brands that in the face [of] overwhelming upset and evidence around why what they’ve done is problematic, cannot apologize and say they […] will do better.”

Rose Cartwright, cofounder of Made of Millions, a non-profit platform that is dedicated to mental health advocacy, pointed out in a statement Sunday that a fashion magazine is uniquely ill-equipped to comprehend or discuss mental health struggles.

“You could barely design a more perfect engine of mental ill health than Vogue – an advertising machine that finds beautiful ways of lying to women about what will make them happy,” she wrote on Instagram.

She pointed out that “madness” and many issues with mental health develop because people “exist in impossible situations that their minds can’t make sense of, or because they’ve inherited holding patterns from generations of poverty, discrimination and abuse.

“These subjects are tonally off-colour for a brand that’s built on luxury.”

The model depicted in the cover, Simona Kirchnerova, initially described it as a “career highlight,” on her Instagram to have been featured on the cover with her actual mother and grandmother playing the nurses.

After the backlash, she issued a statement saying “the model is not in charge of any photo shoot,” and revealing that she had dealt with depression herself in the past.

The other three covers for Vogue Portugal’s “Madness” issue include a woman sitting in a chair in front of a fake beach background, a woman in a voluminous black dress with numerous legs protruding from underneath the skirt, and a pair of hands holding a human heart. 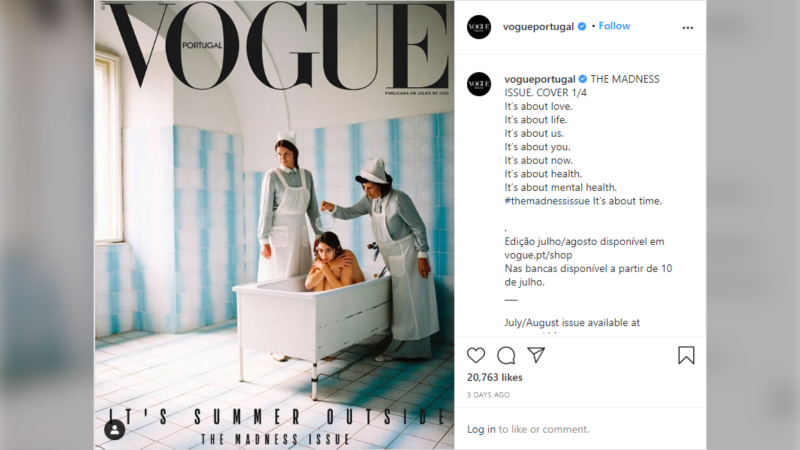