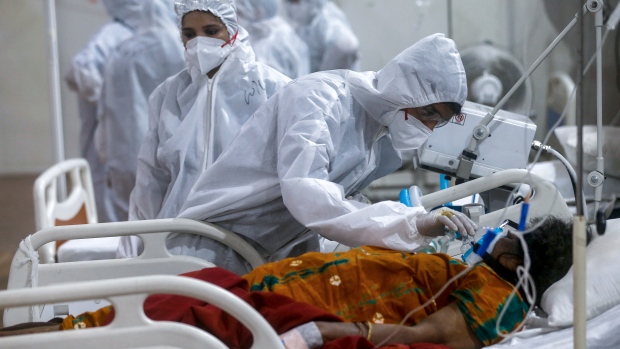 TORONTO — As India struggles to contain a massive outbreak of the novel coronavirus, the country’s doctors have been warned to be on the lookout for a rare and potentially fatal fungal infection that is afflicting patients with COVID-19 or those who have recently recovered.

And while India hasn’t released national figures on the disease, medical experts are reporting they’ve seen a rise in cases in recent weeks.

In the western state of Maharashtra, where Mumbai is located, as many as 300 cases of black fungus have been detected, according to Khusrav Bajan, a consultant at Mumbai’s P.D. Hinduja National Hospital and a member of the state’s COVID-19 taskforce.

P Suresh, the head of opthalmology at Fortis Hospital in Mulund, Mumbai, told Reuters that his hospital has treated at least 10 patients for mucormycosis in the past two weeks – twice as many they saw from the entire year before.

State-run hospitals in Gujarat have also reported approximately 300 cases in four of the state’s cities, including its largest Ahmedabad.

And although mucormycosis is rare and the Indian government has said there isn’t a major outbreak of it in the country, the disease is an unwelcome complication for an already burdened health-care system that is short on hospital beds, oxygen, and other supplies desperately needed during the pandemic.

Mucormycosis is a rare, but potentially fatal fungal infection that is caused by exposure to a group of moulds called mucormycetes.

These fungi can live throughout the environment and can be found in soil, plants, manure, decaying fruits and vegetables and other organic matter, such as leaves or rotten wood. People can come into contact with the fungal spores by breathing them in or through the skin, if they have a cut or burn or other exposed wound.

These fungi can be found in countries throughout the world, including Canada.

In fact, they’re so widespread they can even be found in the nose and lungs of healthy individuals, according to Leah Cowan, a professor and chair of the Department of Molecular Genetics at the University of Toronto and the co-director of a research program at CIFAR focused on studying the fungal kingdom.

In these cases, however, people with healthy immune systems can usually clear the fungi so they don’t cause any problems.

“The issue is when people don’t have a strong enough immune system to fight off these fungi that are really fairly widespread in the environment,” Cowan told CTVNews.ca during a telephone interview on Wednesday.

The overall mortality rate for the disease is 54 per cent and 46 per cent for sinus infections, according to the U.S. Centers for Disease Control and Prevention (CDC).

“It can be really lethal,” Cowan said. “It is a pretty nasty fungus.”

WHAT ARE THE SYMPTOMS?

Cowan said mucormycosis or “black fungus” can cause a wide range of symptoms depending on where the infection occurs.

“Once it’s inside the body, it can then spread throughout the bloodstream and affect all kinds of organs,” she said.

Early symptoms can include sinus pain or a nasal blockage on one side of the face, a headache on one side, swelling, numbness, toothache, and loosening teeth.

More serious symptoms include blackening or discolouration of the nose, blurred or double vision, chest pain, breathing difficulties, and coughing up blood.

The CDC says that in cases where the skin is infected, the area may turn black and there may be pain, warmth, excessive redness, or swelling around the wound.

WHO IS MOST AT RISK?

While mucormycosis is rare, it’s more common among people who are immunocompromised or take medications that weaken their immune system.

Those who are most at risk include people with diabetes, cancer, HIV/AIDS, an organ and stem cell transplant, a low number of white blood cells, too much iron, and those with long-term corticosteroid use and injection drug use.

WHY ARE THERE MORE CASES IN INDIA?

While there have been reports of mucormycosis in countries such as U.K., U.S., France, Austria, Brazil, and Mexico during the pandemic, Cowan said India is experiencing more cases for several reasons.

Firstly, she said India already has a high prevalence of uncontrolled diabetes, which makes some people there much more susceptible to the fungal infection.

That vulnerability is then exacerbated by the raging spread of coronavirus in the country, which can leave them hospitalized with severe COVID-19.

Finally, to make matters worse, Cowan said the use of steroid treatments, such as dexamethasone, for COVID-19 may actually trigger the development of mucormycosis in these patients.

Steroids are used to reduce inflammation in the lungs of patients with severe COVID-19 and suppress the immune system to prevent it from going into overdrive and damaging organs. However, Cowan said that dampening of the immune system can also expose patients to other risks, such as mucormycosis.

“The use of steroids can be absolutely life saving, but it also creates these huge risks and vulnerabilities,” she said. “Doctors need to be very, very careful with how they’re monitoring those kind of treatment regimens.”

Cowan said mucormycosis often develops after a COVID-19 patient, usually one with diabetes, has undergone steroidal treatment for the disease.

CAN IT BE TREATED?

Cowan said it’s very difficult to treat fungal infections like mucormycosis and there isn’t any vaccine for it. She said there is one antifungal drug called amphotericin B that is commonly used, but it’s expensive, there are a lot of side effects that go along with it, and it has to be administered through an intravenous injection every day for up to eight weeks.

“It’s expensive, it’s damaging, it’s toxic, it requires IV every day for up to eight weeks and often, it’s not curative,” Cowan said.

Many times, treatment of mucormycosis requires surgery to remove all of the dead or infected tissue.

“That can happen in the brain, right in the eye,” Cowan said. “There’s this really common issue now with having to remove the eye of these patients to save their lives.”

Cowan said, in general, fungal infections have high mortality rates because they’re difficult to treat with drugs and they’ve been understudied.

“There’s a much bigger field and a lot more money behind antibacterials and antivirals than there are supporting antifungal research,” she said. “So we think there’s a really huge, huge and growing unmet medical need here.”

With files from Reuters and AFP