LONDON, ONT. — A team of researchers based in London, Ont. is the first in the world to attempt treating critical COVID-19 patients with a modified form of dialysis, doctors say.

The team at the Lawson Health Research Institute is led by Dr. Chris McIntyre, who while working in the intensive care unit at London Health Sciences Centre (LHSC), determined more treatment options were needed to fight COVID-19 in the hardest hit patients.

“This led to the idea of treating a patient’s blood outside of the body. We could reprogram white blood cells associated with inflammation to alter the immune response,” said McIntyre.

The inflammation he refers to is related to something called a “cytokine storm,” a heightened immune response as a result of the virus.

The team treated its first patient with this form of dialysis last week at LHSC. McIntyre says the patient was in critical condition and suffering from multiple organ failure.

McIntyre says the patient is still in intensive care and still requires organ support, but it is much less support than before.

These first patient results are promising, considering that currently treatment options are limited to specific drugs and there are concerns about a global shortage. 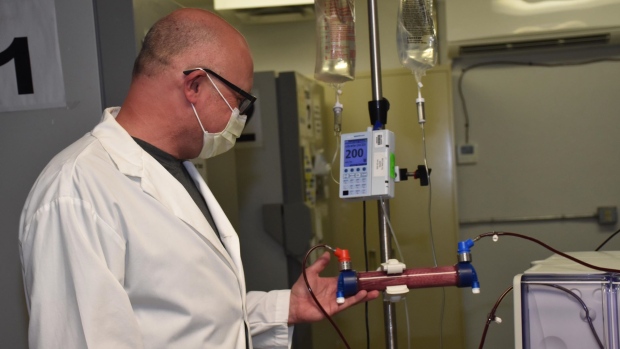 Traditional dialysis is the process of removing excess water, solutes, and toxins from the blood in people whose kidneys can no longer perform these functions naturally.

In this study, researchers are using a modified version of a standard dialyzer.

It gently removes blood in a much slower circuit than standard dialysis. The idea is that it targets and transforms white blood cells associated with inflammation before releasing them back into the patient’s body.

The research team hopes that these “reprogrammed” cells will fight hyper-inflammation in affected organs like the lungs.

The trial reached the treatment phase just 40 days after its original conception.

“The ultimate goal is to improve patient survival and lessen their dependency on oxygen and ventilation,” said McIntyre

In their clinical trial, the team will use this approach on roughly 40 critically ill patients at LHSC’s Victoria Hospital and University Hospital.

If successful, the treatment also has potential to be used in other conditions like sepsis. 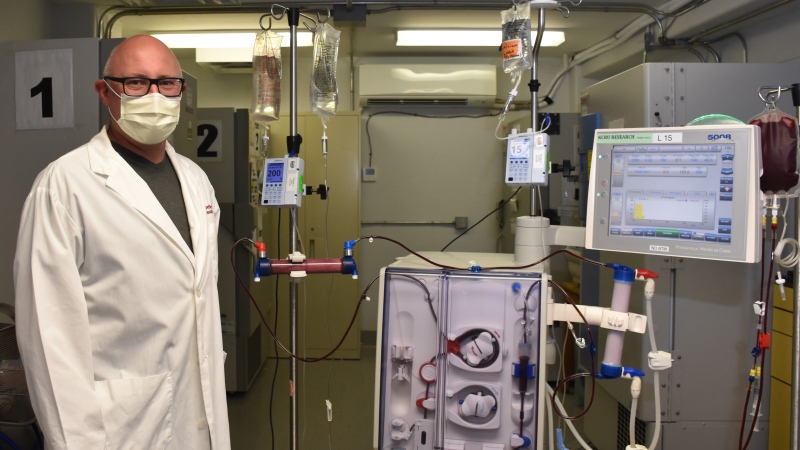